The Clerk from Calcutta

(Readers, please imagine she is a .Indian woman instead, for this post. During a 10 minute search, I couldn't find the right image with "woman" "Indian" "convenience store" and "clerk".) 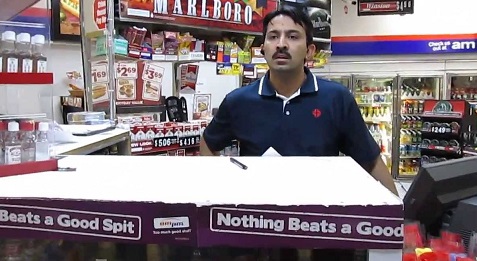 You know, sometimes these blog post ideas come one right after another. The thoughts for this one came to me not more than 30 seconds after those that led me to write Hurrah for extra Credit Card charges! last week. I'm just getting around to it.

The .Indian woman cashier that I dealt with twice as I paid in cash to fill the gas tank was decent enough, though no telling about her English. Nobody seems to want to chat as much now. As I came in to pay (first time inside) with a 20, I figured I may as get some one dollar bills too that I needed for something. The lady was fine with that. She went into another drawer of some sort to put in my 10 and get the 1's out, versus the one she put my 20 into. Maybe that's odd and about tax avoidance, maybe not...

I figured I'd better count the bills, and I'd better do it right there inside the store. If the amount were wrong, coming back from outside would be suspect if they didn't add up. OK, so I counted them up for a few seconds, and went on my way to pump gas (again, coming in later for the change once that tank was as topped as it could be). While coming out of the store, I wondered for a second (well long enough to get a blog post going!) whether this lady would be offended by my counting the money right in front of her.

It's a matter of trust but also of competence. My guess, based completely on stereotypes, mind you, as that is usually all I have to go by, was that the lady was probably very competent, but maybe not so trustworthy. I'd never met the lady before. No, I've never had any bad dealings with .Indian people in general, but I haven't had any major dealings at all. Even the stereotype in my head would tell me that 95% of the convenient store clerks of this persuasion would give me the right change, based on honesty. I don't want to lose 5% though, or I would just keep my money in the bank, with no interest and exposed to inflation, wait ...

Was the lady pissed off at me, a native of her adoptive country, for not trusting her? I don't care that awful much, but I thought about it long enough for this post. "Oh, these Americans don't trust us. That is so stereotypical - probably another Trump voter who wants to kick us all out. We need to change this country by overwhelming these white people with numbers. I can't wait till my cousin from Bombay gets through the hoops with my Uncle Apu's bribe money, so he can take over, and I can spend more time on my hair and dot."

Who knows what she's thinking? That's the problem with having a mishmash of ethnicities and races in this Tower of Babylon. I've heard it from an immigrant woman myself: "I can't see what these people I work with are thinking. It's different from back home." Actually, it's not that much different as women everywhere think that female intuition is accurate, but it's not half the time. I don't have feminine intuition. However, if it's any American-looking individual behind the register, I'm gonna have more faith, and probably not count the change. Sorry, I could be wrong in my estimates. Too bad.

Would it not be better if we have much smaller numbers of immigrants who we can get to know and trust (or not) after a while? If you've got one Chinese family in the whole area, and people understand they are good people, must of us will not worry when we get our change from the teenage son as the store. Of course, being a Millennial, like all of them, I'd kind of wonder if he knows how many 1's to give back from a 10. If there's no app, I mean, what the hell do you do?

Thanks for the video Mr. Alarmist...

Adam, I need to remember to copy those bigger dots. It'll make my posts on the "sub continentals" easier to read.

Alarmist, holy moley, man, they don't mess around on Latin TV. You used to have to pay big money to see that stuff on TV! That was the same Flavia, right? I think I recognize the cute laugh.
The Alarmist
PS

At the risk of pushing a joke too far, enjoy ...

'Twould be better to have no immigration at all and always count your change. (I count my change, not because of distrust or incompetence per se, but because mistakes happen.)

The only •Indians I deal with own one of the small gas station convenience stores in town. They're very nice. I think they've lived here longer than I have. If they were shady, distrustful business people they wouldn't last long in our sleepy little mountain town as people wouldn't do business with them.

☮
Cloudbuster
PS "please imagine she is a .Indian woman instead"

As hairy as some Indian women are, sure, easy!
Ganderson
PS My goof- should be CLANK your chains...
Moderator
PS: Doing the icing that Americans just won't do? Is that it, Mr. Ganderson?

Alarmist, I'm sorry. Susy seems nice and all, but my heart belongs to Flavia. If not on a K-1 fiance visa, with my wife's sign-off, of course, I am hoping we could bring Flavia in from Chile on an H-DoubleD visa.
Moderator
PS: Mr. Blanc, my post was written as if we still had a choice back in 1965 or so. Yes, a 50 year or more immigration moratorium is the least we need now. If Mr. Brimelow had been listened to in the mid-1990s, that might have saved the country.
The Alarmist
PS

BTW, why do we rarely get these as immigrants?

The number of sub continentals I want in the US is approximately ZERO.
My immigration plan: hockey players and their hot WAGS.
The Alarmist
PS

Speaking of immigration, ask the feather Indians how open borders worked for them.
MBlanc46
PS It would be better to have no immigration at all. From Anywhere. And always count your change.