The Principal is no longer my Pal

Maybe she never was. I guess the expression was always said in jest anyway. In this sequel to our post Tagless Recess during the PANDEMIC!, I will relate how I found out that our elementary school principal is much more State bureaucratic cadre than anyone's pal.

She didn't used to seem this way. Has she changed just due to being under the thumb of the school district for so long or this new Kung Flu PanicFest with edicts of all sorts being handed down for here to enforce?

First, it's not so easy to lay down rules about face masks on the little ones: 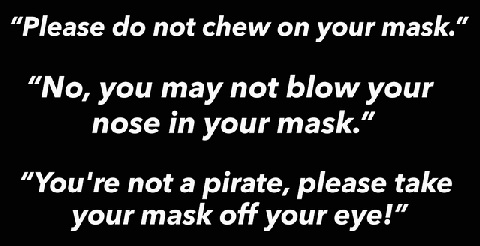 It's much more productive to give the parents the COVID run-around during pick-up time. I had to park on the far side of the school due to not knowing about some road construction. Well, as I approached the schoolyard, a teacher who somehow had avoided being a total bureaucrat told me "well, this isn't where the 'walkers' get picked up, but your son is out here anyway, so let me call him". My kid was about 6 ft. away when the Principal came over and told us this was simply not how it works. Well, fine, tomorrow I can go to the right place, right? Nope, she sent my kid way around 200 yards, and me around on the other side to meet him at the REAL pick-up place.

I let it go. You've got to know how to pick your battles, right? 5 minutes later, on the other side, I waited a couple of minutes and my boy was there with me. (That's when I told him, in front of people "you can take off the silly mask now".) We headed off toward the car, alongside the school, the opposite of the way I had just gone to get him. I'm guessing our walking in front of all the mask-wearing folks pissed off this school tyrant errr, Principal, as we passed her again while walking. Now, she told us we were going the wrong way for the "flow" they needed (to keep the Covid germies guessing, or something). I got a bit pissed and almost defied her in front of the kid. It wasn't worth it, and it was a nice day to walk some more anyway.

Will he get sent to detention now more often?* Will the sins of the father get put on the son, Old Testament style? An unmasked prophet gets no honor in his own school district, or something like that.

* OK, it was only the one time when he peed on the wall of the school when he had to go badly during recess. This was something that my wife had explicitly told him to do, as "it can hurt you to hold it in." We weren't at all mad at him - the whole thing was hilarious to the whole family.

Moderator
PS: Brawndo, it's unbelievable how different the school yard, the teachers, the parents, the whole damn thing are from when I went to school. It's very depressing. That there's another post.
Moderator
PS: "Contempt for stupid rules is an important part of being an American..." - Cloudbuster. Agreed, completely. The boy has got a big dose of that already, Again, see my next post.

"You need to spring your kid from the big house" - Alarmist. Yeah, you just don't take the warden's books until you have that hole dug in the wall (behind the girly poster), as in the "Shawshank Redemption". I tried not to be impulsive the other day, contrary to my usual self.

The wife is a whole lot more on board than this time last year - not due to the COVID (though she's mellowed WAY out on that too, or opened her eyes a bit) - with the politics and evil around us, that is. I will have a post on this shortly.
Moderator
PS: See the next post, Alarmist and Cloudbuster. It was not the time to take a stand yet, IMO. That will come when the teaching goes into the PC stuff that is beyond what we're going to take. As I wrote, we need the Plan B in place first - arrangements for homeschooling.
The Alarmist
PS

I agree with CB. You had a teachable moment there, and you caved to the man ... err, woman ... err womyn stamping its boot on your face.

Is homeschooling an option? You need to spring your kid from the big house.
Brawndo Tall Can
PS I feel bad for the kids. So glad to be grown as the world is driven insane by materialism and the inability to throw off a parasitic class of inbred elites who consider themselves as being born with the divine right of kings to rule over the unwashed prole deplorable kulak untermenschen scum.
Have you heard of the faux Klaus Schwab Twit account?
Just got done reading it for laughs but they really do view humanity as their ant colony.
This trickles down to the local STASI at a school near you.
Adam Smith
PS: I agree with Cloudbuster...

"When your kid was six feet away, you should have taken your kid and walked straight to your car. Putting up with idiocy only gets you a world of idiocy."

I also agree with Mr. Mblanc...

"Good on ya for not losing it and giving the old Staliness a good dose of it."

No need to lose one's temper when dealing with insanity.
But we don't have to put up with it either.

I do think that you should have taken your kid to your car without playing "simon says" with this skeezy collicott.

The "principal" is a petty tyrant and a bully.
She took advantage of your kindness and amicable nature.
I imagine she exploits the goodwill of others too...

And the soil of the heart's of the people of the skool were hardened because the "principal's" heart was ruled by the god of this world.

An unmasked prophet gets no honor except on his own blog.

☮
MBlanc46
PS Higher education was veering Left when I was an undergrad. It was not easy being a Goldwater supporter in the autumn of my freshman year. Schools of education are on the Left fringe of higher education—can’t let any of our “educators” entertain the hateful belief that black children aren’t just as smart as white children. This woman would not have become a principal, or even a teacher, if she didn’t hew closely to the Party line. Normal people lost control of the educational system decades ago. And now we have lost our country. Good on ya for not losing it and giving the old Staliness a good dose of it. It wouldn’t accomplish anything but making your son’s lot even worse.
Cloudbuster
PS: Most of my kids were home schooled and I didn't have to deal with this crap, but the youngest was really adamant about wanting to try a regular school so we let her. Since she had spent so many years at home she very quickly ran head-on into arbitrary authoritarianism. I told her that, yes, the rules were stupid and that you always have to view it as a guerilla action -- get away with what you can and flout the rules when possible, stay below the radar when you have to. A lot of the school system's threats are empty -- you have to believe they are important for them to be important. Contempt for stupid rules is an important part of being an American.

I was a big rule manipulator in school and I found a healthy contempt for the prison camps we have masquerading as an educational system was a great benefit.
Cloudbuster
PS: When your kid was six feet away, you should have taken your kid and walked straight to your car. Putting up with idiocy only gets you a world of idiocy. What's she going to do? Tackle you? Suspend your kid? Yeah, maybe the latter. You use that as a "teachable moment" to make sure your kid understands arbitrary authority is bullshit.
Robert
PS: "it can hurt you to hold it in."

Our Dog agrees, If we are too slow, she gets a pinched look and squeaks at a much higher pitch than her size implies.