Carson City, get me outta this!

(Hey, what can you do for a title when you still have Warren Zevon and that great guitar riff in Lawyers, Guns, and Money in my head, since the last post.)

This has been the situation for this whole afternoon: 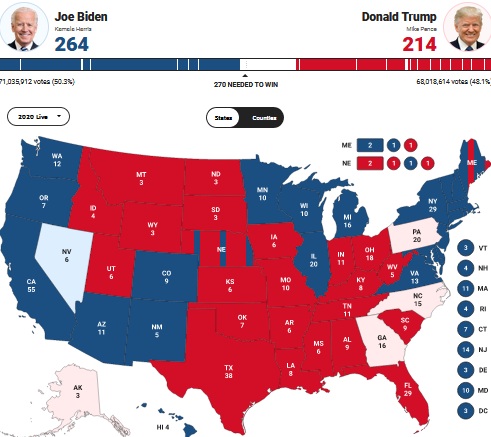 First of all, you gotta hope and/or pray that North Carolina, Georgia, and Pennsylvania stay the hell put. The latter, Penn., could be a problem, as were the Silver State to go for Trump in the end, then the ctrl-left would go all out for new votes in the Philadelphia area. I'm sure some mail with some questionable, but what-the-hell, postmarks could be had for cheap.

It's amazing that this race possibly has, or will soon, come down to Nevada the "Silver State". As I mentioned in the previous post, Nevada used to be a conservative bastion. Really, it was as Libertarian as one could get, probably more than even the "Free State" project location (Vermont or New Hampshire, it's been a while ...) due to there being so much more land in Nevada. Liberty flourishes more easily when there is lots of room.

Besides the libertine paradise of Lost Wages (at least for those who are smart enough not to play!), the State was full, if you could call empty "full", of ranchers and mining types. I've driven multiple different routes across Nevada - see I've been everywhere in this here land. - mostly on the two lane roads, and one could just get away from everything and everybody out there. Get out of the car, set up some bottles or old computers, and start plinking away. Well, in the modern electronic world, I suppose one can never be away from the prying eyes of somebody, but when can still be tempted to think he is alone with nobody but God, out there.

It's been the Californians bringing their California politics to both Vegas and the Reno/Tahoe area (Lake Tahoe straddles the border in central CA/NV) that's part of the change. A commenter under an unz (either Sailer or Epigone) article today put this nicely: They are like plague refugees of the 14th century. They run far away to get away from the disease, but just bring it with them to spread in their new home. Along with the Californicators, hundreds of thousands of, hell maybe a million(?) counting offspring, by now, illegal aliens were imported to do that card shuffling, crap table cleaning, and all usual manner of menial work that American, well, they used to do it, so I don't see how they CAN'T do.

Back to the great Libertarian pundit, Vin Suprynowicz, I did note from his later columns, ~ 2010 or so, unlike the Reason magazine fools, Vin saw the ruin brought on by massive illegal immigration.

Anyway, with that long background written, I will just conclude this point by saying that Nevada is not the libertarian State that would have put Trump on top before PST poll closing time,were this 1985. Well, that is, if no decent Libertarian were running. The place sure as shooting wouldn't have gone for the extreme-left Biden/Cameltoe ticket! 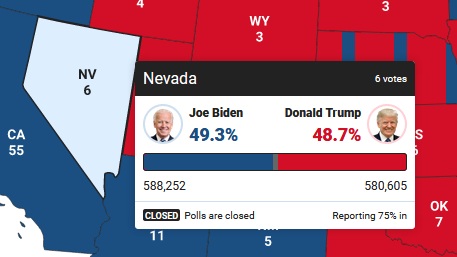 It is the current year, though, and the current day after another 50/50 divided Presidential election. The reader should be able to see those numbers above. The vote counts have not changed since my late morning, maybe earlier, but the "Reporting % in" has gone up from 67% to 75%. I don't know what the deal is with that. I wrote 8,400 votes in the last post in haste and got it wrong. It is the same number now on the Fox News site as it was then, but it's actually 7,647. That's 7,647 votes that could change the country. I really hope that of the ~ 390,000 more votes that could be coming*, not a damn one is from a former Californian who knows how to do things better, or an illegal alien that doesn't know Jack Squat about how this country is supposed to run!

I was voting in Nevada,
I just left to take a piss.
Send lawyers, guns, and money
to get me out of this!

Trump, send lawyers, guns and money
The shit has hit the fan. - Help!

This one might come down to faithless electors or state legislatures overriding the counts and sending their own slate to DC for the formal count.

But here is a way out there theory: “Mainstream” Repubes have surrendered the WH to the Dems in exchange for keeping the Senate. We’ll see how long whatever has been made with the Devil is kept before they join us in the gulag.
ganderson
PS John- we hosted some Russians in 1990, still Soviet Union, but crumbling fast. We had gone to Moscow over New Years, but what amazed me was how amazed the Russian teachers that I, a humble teacher, owned my own house. They had believed that the US was one big South Bronx with a few mansions on the hill.
Moderator
PS: John from Romania: Bad words are de rigueur almost, around here, at least by this blogger. No problem there.

Thank you for your anti-Communist paragraph. I am a staunch anti-Commie, as you may have, or could, see from the Topic Key "Commies" on this site. However, Americans seem to forget what they used to understand (the stuff you wrote) very quickly.

People under 35 y/o, of course, could not be expected to know much about what people went through in your country, the rest of the East Bloc, the USSR, Mao's China, etc., but that's why their parents ought to teach them something. The schools sure don't!

Sorry for my bad mouth. But i am angry. The american People don`t know how much, we România, love USA. As a romanian watching America fall is like being a orthodox Christian and witnessing The Byzantine Empire being overrun by the turks. You may not know this but the reason why we revolted in 89 that ended the comunist regime was because of... Dallas. The TV show. În 1987 the comunist regime decided to give us once a week, on saturday, one episoade of Dallas. Bad decision on their part. When we saw the freedom, the wealth, the Joy of the American dream, it took 2 years to bring the filthy socialism regime to it s death. When you speak to lefties and want to make a point, present România as a case study. Under socialism we lived în small apartaments, all the same, no heating, hot water only half a hour, after 10pm lights out(litteraly), food rationalized, meat once a month, banana only on Christmas. Happy times i know. I will not mention The secret police. Suffice to say that you could GO to jail for a bottle of Cola and a pack of Marlboro. Under democratic liberalism i went from that small apartment and riding an overcrowded bus to a 4 bedroom house and two cars. The horrors of free market capitalism. But i have to confess that it rips my soul to se America like this. You were always our role model. We adore your Constitution, the Founding Fathers, everything. Edward Hopper îs still my favorite painter. I pray to God that history will spare you The ravages of socialism. It s horrible. You have to live it to fully understand it. That s why we are immune to political correctness. We recognize as tipical nomenclatura talk. Say liberal and we understand comrade, say racism and we understand class strugle, say White supremacy and we understand resentment from losers. I love what you do on this site. Sorry for the bad english. Best of luck.
Moderator
PS: 35 years ago, if anybody had told me I'd be somewhat jealous of a man that gets to live in Romania, you'd have had every right to lock me up in the crazy house.

Now, well, we're only as fucked as we let ourselves get fucked, John. The Commies here are dealing with an army that they forgot about. Thank you for the well wishes and for commenting in general.
John
PS

Sorry man but the communists are coming. They will Take your house and belongins and throw you în The Gulag. I know. I am from Romania. I know what socialism îs. It s a disease. Worse than cancer. You Americans are fucked. I miss The America of the fifties. Now you are run by nigger worshippers. God luck. Greatings from Romania