The Democrats: Party of the Dark Winter 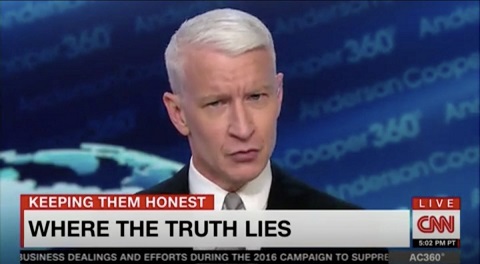 I believe this is the guy I saw.

Steve Sailer has a long thread of comments (287 of them as of publish , oops, platform time) under his post So, who is going to win?. Here is just a thought I had about it

I was forced to sit near a TV yesterday while eating my pudding. CNN was on. When Trump came on, I was just about laughing out loud about his mask remark. He is so enthusiastic and right. Then that guy (Anderson Cooper – does he have white hair now? That’s the guy. I think) came back on, bitching about the Kung Flu and that Trump is not taking it seriously enough. Between that and the President’s way, I understand why there are some really gung-ho Trump supporters.

Were I to know nothing of politics and just have seen that 5 minutes of TV while eating my jello brand pudding, I’d be heading to the polls in the morning for an early Trump vote.

A commenter going by "AnonAnon" on that thread brought up a very good point regarding the Kung Flu stupidity and its connection to the Democrats. Mr. E.H. Hail, of the Hail to You blog, and a commenter here, has written numerous times that this panic/anti-panic divide cuts across normal political lines. That has been true, at least early on. However, I think a few factors have made it align with the R vs. D divide in this 2020 election.

President Trump's having gone through a quick bout of the Kung Flu and coming out none the worse for the wear and tear and couple of day hospital visit has been a good thing. In the meantime, well since it was a PanicFest to begin with, the Democrat Party has been using the Kung Flu to try to bludgeon the President with, though, even if he wanted to, he couldn't have pleased even the worst of the panickers. "Don't stop the incoming flights, you xenophobe!" "We're gonna run outta of masks, so shut up about wearing them!", but now "wear a mask - you're setting a bad example and spreading germies all over your rallies!" The latter was I think what the newsmaker Anderson Cooper was on about.

When he switched to video of President Trump, I truly enjoyed the few seconds of his humor and encouragement. The Democrats are now the party of some "Dark Winter" crap I just read about. Biden goes around with the stupid face diaper, which pretty much disgusts me, well, more than I already am with the guy.

Joe Biden seems to have made Kung Flu Panic part of his platform. Because the Democrats have been harassing the President about it, that's their story now, and they are sticking to it. Do people really want more of this on again - off again LOCKDOWN business and the incessant mass wearing? Biden had hinted that it could be Federally mandated. That's when this guy will not comply.

I think a lot of Americans besides me and the Peak Stupidity readers and commenters have had enough. If you didn't have a reason to vote for Trump before, here's another one for you. You can help end this idiotic religious-cult-like PanicFest with your vote.

Shiny rocks sure are pretty...

They make better currency than paper...

☮
MBlanc46
PS Adam Smith: Someday there won’t be coins and currency. It will all be bits and bytes. Unless they’ve unlearned how to generate electricity, which is certainly possible. In that case it will be shells and pretty stones.
Adam Smith
PS: Good morning Mr. Alarmist...

Remember when platinum was more valuable than gold?
I know you do, it wasn't long ago...

Remember when palladium was half the price of platinum?

One day all the coin and currency will be plastic.

@AdamSmith said: “Maybe "we" can get out of debt with a loan?”

I thought the plan was to mint a few $Trillion platinum coins.
Adam Smith
PS: "Losing a parent to the conservative cyber-swamp is such a common experience among millennials that it has produced an entire sub-genre of documentaries, books and online support groups." Lol... What's with all the support groups?

Who knew RT was "radical"?

“It was heartbreaking,” John said. “That was the moment when I knew my father trusted these right-wing Facebook groups more than he trusts his own son.”

Perhaps there's a reason for that Johnny...

The article does go on to say, "Older Americans, Brashier noted, are actually better at some cognitive tasks than younger people. For example, they tend to know more about history and politics"...

Maybe "we" can get out of debt with a loan?

The D voters are just voting against Bad Orange Man, I guess, plus the free stuff. Back to Mr. Blanc's point, yeah, they will have to keep spending. Hey, we got up to $27,000,000,000,000 or so debt, and nothing happened, so why not push it to $30 Trillion next year, hell, make it a round 50. We can even give some of the money to white people, to like keep stuff running and all...
Moderator
PS: Robert, thanks for the Edgar Winter music. I bet the last time I heard that was off an 8-track tape - no kidding!

Alarmist, yep, I just want more time to get ready. However, who knows if Trump really has some better plans up his sleeve for a 2nd term? If so, 1st order of bidness is to shitcan Javanka. He used to know how to fire people - never watched it, but I remember the tag line of the show: "ya fiyad."
Moderator
PS: Mr. Anon, per that HuffPost article, the older folks don't know how to handle the information. Could it be because we did get to learn some history in our day and know the revisionist BS when we see it, driving us off sites like, I dunno, Huffington Post?

"Losing a parent to the conservative cyber-swamp is such a common experience among millennials that it has produced an entire sub-genre of documentaries, books and online support groups.". Ha! The son works for a left-wing think tank. Who is the lost one?
Adam Smith
PS: Mr. Anon, I too have noticed the trend.

Because the DNC believes in kakistocracy and doesn't believe in democracy?

Honk Honkler, Czar of Honks.
MBlanc46
PS The one saving grace of a Biden/Harris victory will be that they will have to deal with the godawful mess they’ve made of the economy and society. They’ll have to deal with the depression that will result from their “lockdowns” and with the riotous mobs that they’ve loosed in the streets. Regarding ganderson’s question, Biden got the nod because the Dem nabobs panicked when none of their twenty or so candidates appeared likely to head off Sanders. They jumped on Biden because he seemed to be the only one capable of bringing out the blacks and keeping some of the white vote. Harris got the nod because they had to have a woman and a PoC on the ticket. It seems preposterous; the sad part is that it appears that it’s going to work.
Ganderson
PS . Can someone explain to me why two people that their own party’s voters showed little. enthusiasm for in the primaries wound up at the top of the ticket?
The Alarmist
PS

I have little hope that re-electing Trump will stop the inexorable swirl into the black hole. I merely hope that it will slow it enough for enough Americans to come to their senses and rescue what they can of what is left of the America we knew.

Biden/Harris and the left want us to plunge headlong into the black hole in the belief it is a wormhole that will take us speedily into a new and better universe. What if, however, the wormhole turns out to be a dark, humanity-crushing singularity with no hope of escape?
Robert
PS: Not a dark Winter:

https://www.youtube.com/watch?v=P8f-Qb-bwlU
Mr. Anon
PS Anybody else notice this trend: