No signs are good signs

We first had one Trump sign at a time, with a daily rotation, out on the lawn, but now we're firing both barrels. These are kind of unique signs too, not the simple ones below. 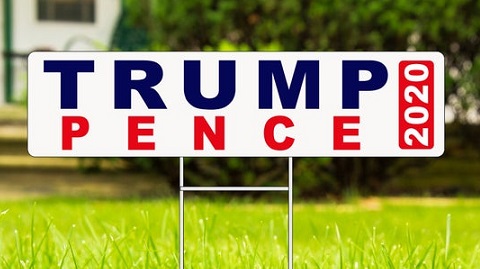 A guy pulled part-way off the road, still blocking part of the near lane, to thank me for putting out the Trump sign about 3 weeks ago while I was doing yard work. We started talking politics. I waved a couple of bicyclists around, as this guy also may have thought we'd talk a couple of minutes, and then he'd drive home. It turned out he is a fairly close neighbor.

It also turned out to be about 45 minutes, as we agreed on pretty much EVERYTHING. This new friend was another Libertarian/Conservative, and you don't find that awful many.

The next day a guy who walked during lunch hour on a usual route tried to talk to me about the Trump sign, but I was on an important phone call, so I just waved. I was hoping to see him again, because it seemed rude, what I'd done. I saw him a week later, said hello from the porch, and we ended up talking for 20 minutes. He told me about the places in which one could vote early, which, as I already posted about, we did,

Besides some other thumbs up by passers by, both pedestrian and vehicular, a neighbor 2 doors down said she like the signs. Yet, my wife asked me how Trump could do well, when all we see is Biden or BLM signs on the yards near us (maybe one in 4 or 5 yards). It's because people are worried about not only having the signs stolen or vandalized, but about having other things vandalized. Run-over frisbees are the least of your worries.

You don't know how many Trump voters there are around, due to their keeping a low profile due to the Anacrcho-tyranny going on. I hope that's a general thing - no signs = Trump voters.

Tomorrow's pro-Trump post (or maybe 2) will be about the media.

Moderator
PS: Mr. Utopian, sounds like a great neighborhood. Ours is mixed - nice people, but too nice to want to see reality, some of them anyway.

Mr. Smith, got it. Mine are pretty good too, designed by a family member. No pics right now for anonymity reasons??

Alarmist, are you pretty sure your friends are not Trump supporters then? I guess it is a nice gesture to ask you if you are worried about the Social Distancing, whether you think it's all bullshit or not. I suppose they are not concerned, or they'd be texting you instructions and all...

Oh, you are in England right? Is the law what they are worried about?

I was previously invited by European friends to dinner next week, and they texted earlier today to see if I was worried about violating the CV limits on number of households gathering, as we would be three, and they jokingly tossed in that we could pop open a couple bottles of bubbly to celebrate the election outcome. I texted back that as part of la résistance, I’d be happy to drink to Mr. Trump’s re-election.
Adam Smith
PS: Good morning Mr. Moderator...

Kamala is a monster.

☮
Reactionary Utopian
PS I live in a red area, so no surprise that there's a lot of Trump signage with very little apparent fear of anarchotyranny. Amusingly, I see not only the official "Trump 2020" signs and flags with the "Keep America Great" thing underneath, but I also see signs and flags (same colors/style/font) with "No More Bullshit" in place of "Keep America Great." The NMB part I take as a response to all things 2020, but I may be mistaken.