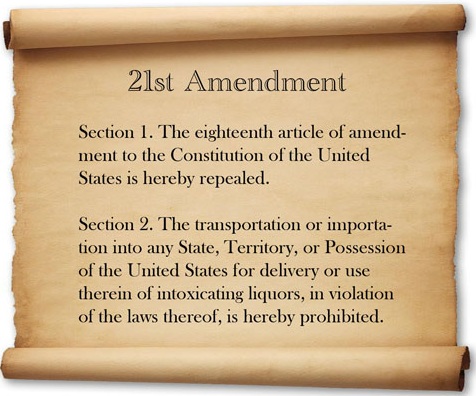 The eighteenth article of amendment to the Constitution of the United States is hereby repealed.

The transportation or importation into any State, Territory, or Possession of the United States for delivery or use therein of intoxicating liquors, in violation of the laws thereof, is hereby prohibited.

This article shall be inoperative unless it shall have been ratified as an amendment to the Constitution by conventions in the several States, as provided in the Constitution, within seven years from the date of the submission hereof to the States by the Congress.

[My bolding, as the typewriters of 1933 might have had double-strike, but not real bolding. We are so advanced ...]

Man, it's been 7 weeks since our last one of these posts. I WILL FINISH, DAMMIT! One can get awfully backed-up with, errr, stupidity these days. This will be a short post, regarding our favorite Constitutional Amendment since the first10 in the Bill of Rights. Amendment XXI is the only one that was created to reverse the power given to the US Feral Government by a previous Amendment, in this case Amendment XVIII, regarding the prohibition of the sale of alcohol.

Something I didn't know until just now, upon reading the interpretation section for Amendment XXI on our go-to site for all things US Constitution (here) is that this one alone was ratified via the convention process. That is, rather than 3/4 of the various States' legislatures passing ratification measures, Constitutional conventions were formed. (Could that even happen now, as disunited as this country is?) The interpretation writers have their explanation for this unique case:

Why did those who proposed the Twenty-First Amendment take the unprecedented step of calling for ratification by convention delegates rather than by legislators? The answer seems to be that though prohibition of alcohol had lost a great deal of popular support by the early 1930s, the political power of the temperance lobby remained intact in a great many states. Many state legislators and legislative leaders were likely to be unwilling to risk the lobby’s wrath. So political prudence pointed in the direction of ratifying conventions as a way of leaving gun-shy legislators with their eyes on re-election out of the process and “off the hook.”

If we called for a Constitution Convention now, would Twitter block the invites due to "harassment" and "hate"? 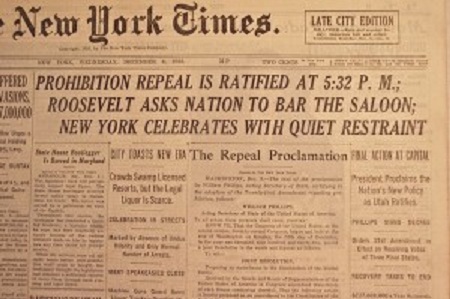 Man, when I first read this headline (not in person, but in the picture!) I read it as "Roosevelt asks nation to all go to the bar or saloon", as in a general celebration. I was about to write "I guess he wasn't a complete asshole, after all." Alas, I read it again more carefully.

Besides the reasoning in the old joke that “after fourteen years with nothing to drink the American people got thirsty.”, the interpretation writers go nice and Libertarian with us on other reasons for this repeal:

More significantly, in all probability, is the judgment of a great many citizens that Prohibition had been a failed, if noble, experiment.

This is not to say that Prohibition had failed to reduce the consumption of alcohol or lower the alcoholism rate or ameliorate in some measure evils associated with drunkenness and alcohol addiction. Especially in the years immediately following Prohibition, the hopes of progressives and others who had supported ratification of the Eighteenth Amendment seemed well-founded. But soon evils on the other side of the ledger became apparent: The black market in alcohol quickly grew; and the inability or unwillingness of law enforcement agencies at every level to stop the illegal production, sale, and transportation of intoxicating liquors resulted in beverage alcohol being more or less easily available to anyone who wanted it, and at prices that ordinary working people could afford. Although the price of liquor, once it became illegal, shot way up in the period immediately following Prohibition, it soon fell dramatically. The Anti-Saloon League (founded in 1893) and its allies had shut down the saloon, only to have it replaced by the “speakeasy.”

What’s more, Prohibition had turned out to be a great boon to organized criminals, such as the notorious mobster Al Capone, who for their own reasons loved it as much as Frances Willard’s Women’s Christian Temperance Union did. Organized crime syndicates used profits from illegal liquor to corrupt police, resulting in non-enforcement of Prohibition (and other) laws in some cases and selective enforcement in others. The public was appalled.

Add to this the feeling that the widespread flouting of Prohibition laws was undermining respect for law in general and encouraging an attitude of contempt for rightful authority, and it is easy to see why support for repeal of Prohibition grew.

The interpretation writers on this site have let me down before a few times, but they are different writers, so a mix of good and bad. I like these guys, Mr. Robert George and Mr. David Richards! I couldn't have said any of this better myself.

One loose end here is Section II. Really, why was this necessary? Amendment X of the Bill of Rights makes it clear that a right to regulate like this, barring, of course, the fixin'-to-be-defunct Amendment XXIII is left to the State or the people. The States always had this right, but I'd guess Section II here was written to appease those who wanted alcohol sales to still be greatly regulated. It caused lots of other Constitution-related litigation and not it a good way:

Litigation of Twenty-First Amendment issues has nearly always concerned the meaning of the Amendment’s second section, and usually the scope of state authority under it. Often questions arise concerning the impact of the second section of the Twenty-First Amendment on the power of Congress “to regulate commerce . . . among the several states . . . .” under Article I, Section 8 of the Constitution. The courts have held that the Amendment means that the power of Congress to displace state regulatory policies is narrower with respect to alcohol than it is to other goods and services; but precisely how much narrower has not been fully established.

Look at that (my-) bolded part. Where do you get the one from the other? See, that, and the 2nd paragraph in the excerpt, are why you just repeal the 18th, and just shut your cotton-pickin' mouth after that! My bolding!! 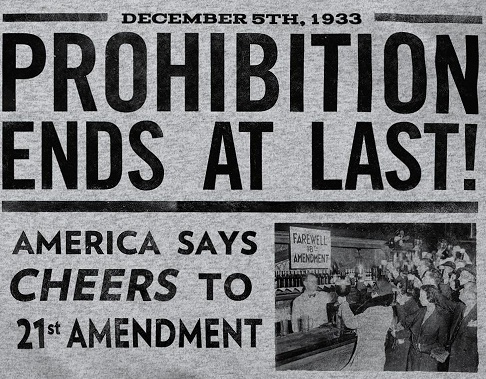 Who says these things are forever? Even Ruth Ginsberg wasn't.


I'd call Amendment XXI a local maxima in Constitutional Amendment.

It’s a shame we can’t put public health policy matters, like lockdowns, to a plebiscite rather than a trusting a kakistocracy of “experts” and elected officials to decide what is best for us?
Cloudbuster
PS: "Add to this the feeling that the widespread flouting of Prohibition laws was undermining respect for law in general and encouraging an attitude of contempt for rightful authority, and it is easy to see why support for repeal of Prohibition grew."

Imagine if modern legislators understood this, that respect for the law is a limited commodity that can be exhausted if abused.
Adam Smith
PS: Tricky bastards indeed...

☮
Moderator
PS: Mr. Smith, you must have submitted that comment just as I was replying to Mr. Blanc just now.

I missed that part about the transportation aspect. I wish we didn't have Congresses full of lawyers. Thank you for that addition to the post. You can make or grow stuff, and you can use it, but nobody can sell or transport it. Tricky bastards.
Moderator
PS: I never learned this stuff as thoroughly as it sounds like you did, Mr. Blanc. This Constitution Center site ought to be part of a homeschooling curriculum, such as Ron Paul's. Maybe there's no point, if it's not taken seriously anyway.

I guess I shouldn't correct an excerpt from another site, but I'll put a "sic" there for you.
Adam Smith
PS: Good evening Mr. Moderator...

"One loose end here is Section II. Really, why was this necessary?"

The 21st amendment only partly repealed the 18th.

Transportation and importation are loaded legal words that place the matter firmly under the so called "commerce clause". It's how the feral beast claimed the "right" to tax liquor.

Interestingly, while it is not technically a "crime" to manufacture or sell intoxicating liquor, you cannot do so because the bankruptcy of 1933 changed the "status" of citizens in relation to the so called "government". As a condition to secure more debt from the international banking cartel known as the "federal reserve", the "government" pledged all "the people" (subjects under the 14th), their property, their offspring and their future labor as collateral for the glorious debt, thereby stripping the people of their rights under law (like the right to distill intoxicating liquor for personal use) and replaced their rights with privileges under commerce, that could be taxed and regulated.

It's the same reason there is no amendment prohibiting the manufacture or possession of cannabis.

We are all "commerce" now.

☮
MBlanc46
PS Thanks for this. Who knew that the repeal amendment was so complicated. I must have read the amendment for my eighth grade test on the US and Illinois (since replaced) constitutions, but, like so may other things, it plumb escaped my memory. One quibble with your otherwise admirable source. The WCTU is the Woman’s Christian Temperance Union, not the Women’s.... I almost always have to correct my academic clients, who should be able to look it up, on this.