President Donald Trump: **the Bad**, the Good, and the Ugly

We've all see the 1966 Clint Eastwood Spaghetti Western, right? Well, this post has absolutely nothing to do with it really. I did change the title around due to my wanting to present things in a bad news/good news order, at least the way people normally like to hear.

See, this was going to be one post on the bad only, but as of this morning I read on VDare what I think is pretty solid vindication of the President, demonstrating some very decent change brought about by the President. That'll be next post though.

For these 3 posts, you're gonna need the music going first, so mash play here, then read on. Here:

Peak Stupidity has had plenty of criticism of President Trump over the last 3 years, seeing as it didn't take long before he had busted the important promises made by Candidate Donald Trump. We don't expect it all to get done, of course. At some points, it doesn't even seem like he's trying though. Our biggest criticisms have been Trump's choices for his employees, his attention span that resembles that of a 2 month-old kitten, and, the subject of this post, which we may not have brought up before, his taking things personally.

Actually, if the President would take the criticisms of Candidate Trump's ideas hard and worked to show them up, that'd be just peachy with me. However, many times he seems to take things seriously ONLY when they apply directly to him. That is, he's not a man of principle. I knew that going in, and have written this before. That Donald Trump doesn't understand the Constitution like Ron Paul does, or Ronald Reagan did, for that matter, is something I figured we could live with. That is due to his bringing up the existential issue of the immigration invasion right away as THE most important issue and his fairly good stance on ending the warfare state.

The problem is that the President doesn't fight when he has the tools to beat the ctrl-left, as brought up by many a smart policy wonk or pundit, unless it hits him. I'm talking right now about Big-Computer-Tech (I'll grudgingly call it "Big Tech" for this post for brevity, but I don't have to like it!) and their censorship. The Constitutional issue of free speech (Amendment I) doesn't limit the actions of private companies. I do get that.

However, you may have read that there are ways to get Big Tech (Facebook and Twitter, specifically), as they basically are seen by law right now as "platforms" rather than "publishers". That makes them immune from liability on libel/slander/consumer protection laws. There is a Section 230 of some Communications Act administered by the FCC. I am no legal eagle, so I will not get into it, but VDare has been for a few years, and one Senator Josh Hawley of Missouri is too.

Not just these two entities but plenty of other pundits and wonks, including in the President's own staff have to have informed him of this action he could take. It's been a little bluster and BS from him toward Big Tech in the past As VDare's James Kirkpatrick wrote yesterday Allum Bokhari’s DELETED: GOP, Trump Learn The Hard Way—Laura Loomer Was Right!. 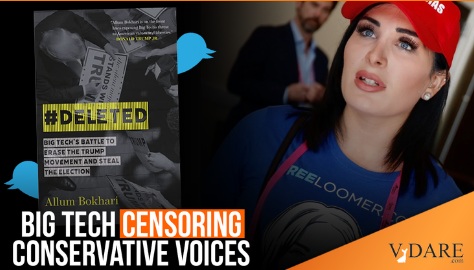 Yeah, "the hard way" is how Mr. Kirkpatrick puts it. President Trump didn't worry about all this too much when it was Alex Jones getting cancelled, or Laura Loomer, or the Proud Boys or whomever else. Now it's about that big NY Post story on the Biden scandal that is very important for Trump in this last stretch leading up to the re-election. (Haha, note that I'm still on his side.) Trump's and I believe the NY Post's tweets were wiped out for whatever normal Orwellian reasons Twitter comes up with for this sort of thing*. Suddenly NOW this Section 230 of the Communications Act is important! The personality of this guy, man, amazing, just amazing, you wouldn't believe ... [/Trump]

I mean, it's been years of this Big Tech censorship crap and the Trump administration has done nothing but occasionally bluster about it. It's been empty threats. Now, down toward 2 weeks before the election, the President wants to at least threaten them with legal action by the FCC or someone. Really? Can't those 2 Big Tech titans wait it out a couple of weeks with whatever kind of obfuscation their $500/hr lawyers can come up with and see how the election turns out. This stuff should have been in progress and either changing the law or putting some serious fear into these people long before now!

That's "The Bad" Trump. I've still got my sign in the yard, and I'm very glad to be able to write about "The Good" Trump later on or tomorrow.


* The latest Babylon Bee news on this is Twitter Shuts Down Entire Network To Slow Spread Of Negative Biden News. Yeah, they are still considered a parody site, but I don't know how long that's gonna work for.

The Alarmist
PS
How about The Feckless, The Clueless, and The Toothless.
MBlanc46
PS The man doesn’t fight. I sure didn’t expect that he’d always win, but I did hope that he would fight. We learned pretty early on that he wasn’t going to fight. Why doesn’t he fight? I claim no special insight into the Trumpian psyche, but my guess is that there’s nothing that he cares enough about to fight for it. Except himself, of course. As you say, he has no principles. The only reason to support him at this late date is that he doesn’t hate us, and the other side clearly does.
Moderator
PS: Yeah, Adam, I'm gonna have to start reading that regularly.. I saw that one too.
Adam Smith
PS: ☮