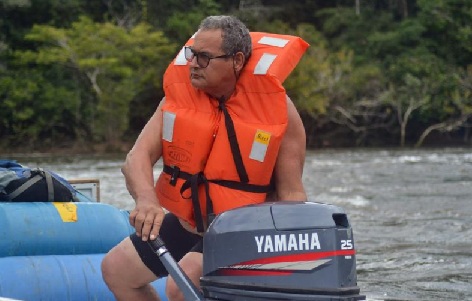 I was going to be pretty snarky about this story, seeing as a sort of hard lessons-learned post about excessive virtue signalling, but I've got mixed feelings. I have some respect for a guy like the Brazilian government official in the story Brazil Amazon tribes expert killed by arrow to the chest while approaching an uncontacted group (though MSM/LYin' Press, the site at least doesn't throw up all kinds of pop-up crap at me).

Just like the indigenous people, who were pushed off the continent of North America, those down south still left have no concept of property rights. Encroachments on what they figure is their territory by mining and lumber companies can be expected. I don't think there's any good solution when one tribe, who may very well have killed the men and captured the women of another tribe to get to live there, run up against people with a concept of the purchase and holding of property. Peak Stupidity discussed a little about this and our fair-handed opinion of the life of savages vs. civilized people in our 3-part review of the very good Sam Gwynn book Empire of the Summer Moon - Part 1, Part 2, and Part 3.

Some of the people trying to save the way of life of these savages truly care about them, as I'd say is the case with Mr. Rieli Franciscato, who worked for the Brazilian government and was a "top expert". (Make of the quotes what you will.) I have lots of respect for a dedicated individual devoting his life to a cause like this. Of course, it WAS on the taxpayers of Brazil, but then I doubt he made a lot of money either. Mr. Franciscato was trying to set up reservations for these people, though I assume more like plots owned by the Brazilian government to let them live their lives as savages deep in the jungle rather than the American way of the 1800s, which for horse-riding tribes of the plains, by definition changed their ways of life.

There's also something really cool about these uncontacted tribes. I don't think there are many left in the world. You don't have to be an anthropologist to be in awe of the idea that these people have never seen anything outside of their primitive existence. They are IN the Stone Age, not just living LIKE they were because they want to, or too many years of Communism. Imagine that. (That's why you just want to buzz them in a Cessna Skyhawk and throw empty Coke bottles out the window, hell, full ones for that matter, in a Gods Must be Crazy fashion, just to fuck with 'em.)

I've even thought it would be a great project to somehow get cameras on them that were well hidden, but how to place them without any "contact" at all? If the tribe doesn't even understand the idea of a camera, and they never find out, is this a blow to their dignity? In general, I think it is very much so. They are not animals, so I suppose it is, no matter what. Would it not be cool though, for the world to be able to check up on them on the internet at all hours of the night, like a REAL reality show, Naked and Unafraid?

Well, the do-gooder Mr. Franciscato was trying to help just such an uncontactable tribe when:

On Wednesday (local time), as he moved close to a previously uncontacted Indigenous group, he was hit by an arrow above the heart.

The attack happened in the forest near the Uru Eu Wau Wau reservation in the western Brazilian state of Rondonia, near the border with Bolivia.

"He cried out, pulled the arrow from his chest, ran 50 metres and collapsed, lifeless," a policeman who accompanied the expedition said in a social media post.

First contact didn't go so well. Mr. Franciscato didn't see this coming, was too complacent from all his previous contacts, I guess.

The Kanindé Ethno-Environmental Defense Association Mr Franciscato helped found in the 1980s said the Indigenous group had no ability to distinguish between a friend or a foe from the outside world.

Of course not. How would these people know? They are obviously not living in peaceful noble savage bliss though, or they would neither have killed the first outsider they saw, nor have had bows and arrows to begin with.

"Rieli was a calm, methodical, soft-spoken man who knew the dangers very well, but he was alone and so he went to ask the police to accompany him," Mr Possuelo said.

Mr Possuelo said the presence of police might have triggered the incident.

Sure, more people probably did make it worse, and maybe were Mr. Franciscato by himself they may have just kept his bright orange life vest and Zodiac boat as treasures and brought him into their camp, gestured excitedly to him for a while, and then eaten him.

I could see plenty of the indigenous people being ready for war against the Brazilians, after they'd seen big Cat machines knocking down trees and guys using guns. However, this was an uncontacted tribe, supposedly. Whaddya' expect? I don't think they appreciate another outsider's help, so you've got to do it from afar.

I do respect Mr. Franciscato's dedicating his life to this cause, no matter how ironic his death was. R.I.P. Rieli Franciscato - you tried your best.

MBlanc46
PS The North American Amerinds—at least those in the countries where they (and mestizos) are not the majority—have not been able to assimilate. Perhaps it’s not been willing to assimilate, it doesn’t matter much, practically. It’s long been my view that large parts of the world—and large parts of the former United States—should be left mostly unpopulated, so that those who’d rather go their own way would have somewhere to go it. It would certainly be the less desirable places, but it would be somewhere where the unsociable could go to be left alone. There’d have to be a lot fewer people in the world for that to work, and with 7.3 billion (or whatever it is) and counting, it doesn’t look as if that’s going to have much chance.
Moderator
PS: Right, Mr. Blanc, I imagine in the past most of the fighting about these locations has been in courts or at least far enough away from these primitive tribes. Now, if we could monetize it with a reality show via the cameras and internet... but again, they are not animals, so I do feel it's wrong - even if they had no idea.

Could the few remaining ever integrate with the rest of the world if they didn't go all the way down fighting? Maybe, but, man, it's such a vast jungle, that you'd think it could be left alone.
MBlanc46
PS It’s hard to not feel some sympathy for the do-gooder in cases like this. Most of us who place a high value on freedom would prefer that people such as those mentioned here just be left alone to live as they’ve always lived. Arrow Guy was attempting to bring that about, but he was attempting to bring it about by not leaving them alone. But the poor buggers are no doubt sitting on what other folks—bankers and developers—want, so it’s unlikely that they’re going to be left alone much longer. One can only hope that they’ll go down fighting.
Moderator
PS: Haha, Mr. Anon! I do remember the guy. Feel free to make cheap shots, too.
Mr. Anon
PS I always wondered what Charles Nelson Reilly did after "Match Game".

(OK, I'm sorry, that was a cheap shot. I shouldn't make fun of a guy who gave his life for science, or rather, for Anthropology. He is part of a fine tradition of curious white dudes who have explored the World we live in.)