If the COVID don't get you, then the lightning will. 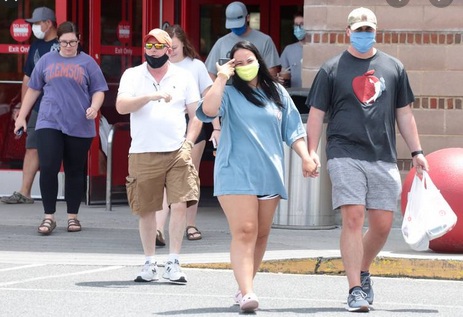 This post is the 2nd Kung Flu story from an expedition far out of the confines of our comfortable State of LOCKDOWN hysteria, a couple of days back ... to Lowe's and then Target. (Oh, the small project for which I got the parts from Lowe's was a success.) Well .. the Lowe's story morphed into an epiphany about black lives and whether they matter ... enough to advertise across one's face like an idiot. This one will stick to the healthcare stupidity that has kept this blog staff in Filet Mignon with half-off Target-bought Chef Boyardee pasta on the side, all chased with 6-packs of Huber fine ale, since around late March. Actually, no, not Filet Mignon, that was Chick-fil-a.

It was the same story, an experiment in social antagonistancing, as I wore no mask into the store, or at any time later. I didn't get any bad reactions, really no reactions at all as I spent the 10 minutes getting my stuff. Yes, lady, "I found everything OK". At the checkout line I was surprise to see a 50-60 y/o woman wearing no mask. She was standing in line right behind me, as the cashier was just starting to ring up my stuff.

Man, was I excited about this. "I'm glad to see someone else who's tired of all this stuff." was roughly the way I put it. She agreed and we spent a minute or more at a 2 ft. social distance just conversing about all the stupidity we'd been seeing. I brought up the students at the nearby university out in the sunshine mostly wearing masks. She brought up a topic we briefly noted in Part 6 of our Scenes from the Kung Flu Summer re-Panic series, people who wear face masks while driving around, with the windows up! The word "retards" was bandied about ... a couple of times ... by me ... in hearing range of the cashier (that plexiglas doesn't work!), other customers, and a young lady who I'm pretty sure was this older lady's daughter.

That was great. All in hearing range could hear us both calmly discuss this Kung Flu Panic-Fest stupidity, in a very friendly manner. I was in a good mood leaving the Target store.

About a mile away from the store, I noticed a cop SUV in the rear-view mirror. He stayed behind me for a mile or so, as I got down below the speed limit, mostly just to piss the guy off, more than anything. OK, I used to get pulled over so often in another vehicle that my heart rate quit even going up. It's been years though. It just doesn't seem to happen anymore, and, no, I don't believe in jinxes, as of publication date, at least.

I had an interesting thought after the first 1/2 mile of this cop following me, beside, I mean, "he's just going the same way". What if the Target store employees had been told "don't bother anyone flouting the COVID panic rules directly - you might get hurt or infected. Just tell your manager and he'll call the cops on 'em." Well, maybe there would just be a warning and maybe a ticket for a low fine for a first offense, but think of the blog posts I could get out of this! Those were my thoughts as I looked back a half mile later and the cop SUV was nowhere in sight.

And to think, I almost cut my hair.
Happened just the other day.
It was getting kind of long....

Must be because I had the Kung Flu for Christmas.
And I'm not feeling up to par.
It increases my paranoia,
like looking at my mirror and seeing a police car.

Just letting my freak face fly, with all apologies due to Crosby, Stills, and Nash... for calling them dirty stinkin' hippies all these years.


* I had had that Dead song in my head (The Wheel) for this post, lost the tab of the youtube video, remembered it, then found out I'd already embedded it before, AND, it was in a post about shopping at Target in the age of the Kung Flu. (See Targeted for Hysteria - Addendum, a follow-up post, of course, from Targeted for Hysteria.) What serendipity, except the independent coming up with the same idea bit was between me and myself of May 14th this year.

Moderator
PS: Alarmist, I assume you were referring to the JFK assassination. If the Deep State takes down President Trump in this way, it would be a (possibly unintentional) killing of 2 birds with one stone. Get rid of the guy who keeps annoyingly trying to drain the swamp and then re-open the Kung Flu Panic-Fest with a vengeance, allowing much more control of the unruly people.

Ronald Reagan, shot within an inch of his heart with a ricocheting .22LR bullet, famously quipped "I hope you are all Republicans". I hope the President doesn't get those "all Republican" doctors. It ain't agonna help nowadays.
Moderator
PS: Mr. Smith, those are perfectly appropriate situation for the use of face masks, of course. As I wrote in comments here before, for me, it's the attic, with all kinds of weird dust, based IMO on old squirrel droppings that require the use of a mask if I'm up there more than a couple of minutes. I got really sick off whatever the hell it is.

The fiberglass particles are no good indeed. That's a reason to wear one around that Owens-Corning insulation too. I don't have a problem with regular wood sawdust for some reason. It smells GREAT too!
The Alarmist
PS
If Mr. Trump dies, it will be “with COVID” and not because of it. It will be cocktail of inadequately tested treatments they are pumping into him. Much better than that Magic Bullet thingy they used the last time around.
Moderator
PS: Mr. Ganderson, that's right, I remember they started, or at least have their headquarters in, Minneapolis.

Oh, so your Church is normally open then, I mean recently?

I'll be looking for that report. Been all through there on some road trips - the road through Bemidji one time and Brainard the other, the US 2 and State road 210, respectively, doncha' know.
Adam Smith
PS: Good evening Mr. Moderator...

Some of those "people of walmart" videos are hilarious...

Our nearest Target is about an hour away... (Exit 14)...
Unfortunately, it is not very interesting...

Our local Walmart (about 15 minutes away) has recently improved scenery, as the local university (UNG) has resumed business for the fall semester. I agree with you about the overall pleasantness of the situation.

In fact, I do think that masks are often beneficial to our health and wellbeing...

Just the other day, I donned a mask as I crawled under the house to check the propane connections/compression fittings, under the house, with soapy bubble water. (I would hate to have a propane leak/potential fire under our otherwise flammable cabin)...

And, I almost always wear a mask when I spray primer and/or paint like I sometimes do...

And/or (especially) when I have to sand fiberglass or other filler on a body panel...

I love my mask, and I am not ashamed to say so.

Fiberglass dust can leave an unsavory taste in your sinuses...

I wish I could say that was me in the image...

☮
Ganderson
PS. Remember, Mr. Moderator, that Target is what I used to describe to my pupils as a “fine Minnesota company”. Naturally they’d be all in on corona panic.

Panic continues apace here in New England, and, this morning I arrived at 8:00 Mass to find the doors locked. No info forthcoming. I hope the padre doesn’t have the Corona Chan!

I’ll be taking a rare fall excursion to central MN this week- I can report on the state of the panic there.
Moderator
PS: Adam, I haven't been to Wal Mart in probably a year and maybe 3 times in the last 5. Our Target store happens to have a lot of scenery - cuties, that is, who are far far from "people of Wal-Mart" types. It's kind of pleasant due to that, just for one thing.

Target had a couple of BIG signs at by the doors saying masks required. Lowe's only had a small one. Target had a strapped off deal for lining up, but it wasn't necessary this time, while Lowe's was almost like normal, except for about everyone wearing masks. (I'm not even sure if they have a big skil saw on a near-vertical table to rip wood for you anymore - that's the only place people might really need a mask. I haven't bought lumber in a while.)

The other day I noticed several different people wearing their face diapers alone in their cars. Weird.

The local Walmart removed the arrow stickers from the floors and the thou shall wear a mask sign is a thing of the past. No more bouncers counting heads at the doors. The keep apart 6 chevrons stickers and the plexiglass at the registers are all that remain.

Interestingly many people (about half) are still donning the diaper. I don't know if they are true believers or if they think Walmart's "mandatory" mask policy is still in effect. Walmart is the only local store that "required" a mask for customers, but even they have dropped the pretense. They do "require" employees to do so, but any old piece of cloth is sufficient.

It's still unsettling to me to see face diapered people in the store. As most places never advocated masks, I've never grown accustomed to the sight. Still seems dystopian to me.

☮
Moderator
PS: I don't know Mr. Blanc. There are a few rebels still. What there is, though, is kind of a relaxed atmosphere where the rebels don't get hassled and vice versa.

That'd kind of make a good post, your speculation about the President actually dying from this. On the one hand, lots of certain people should be happy and ready to bring the economy back up again (pretty much impossible as far as the real economy goes).

"Joe Biden has made is proclamation, now let him enforce it!" says this guy, or will. I hope it doesn't come down to that.
Robert
PS: Mr. Blanc, It would be ironic if I were to have to wear a mask because POTUS died.
MBlanc46
PS You appear to have a high percentage of rebels in your neck of the woods. Here in western Cook County, I don’t recall having seen a single person—even Negroes—without a mask in my various supermarket, post office, DIY store expeditions. Once in a while there’ll be someone with the thing pulled down too far over his (it’s usually a him) nose, but that’s the extent of our non-conformism. Mostly, however, outdoors or when driving, folks don’t wear them. I’m beginning to fear that this is never going to end (at least in my lifetime). President-to-be Biden has already informed us about the mask mandate that he is going to impose (without the slighted shred of legal warrant), and it appears that a large majority of people have been frightened out of their wits that if they don’t wear a mask, they will die. If Trump dies because of this thing, they will triple down on the lockdown.