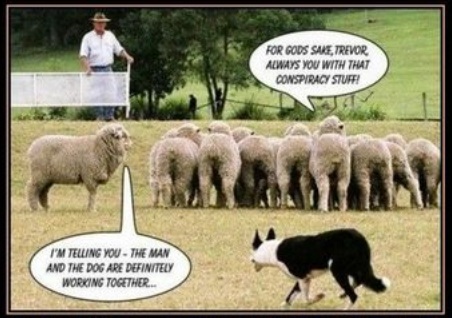 There's been discussion in the comments here, and I'm sure thousands of other comment threads, about attribution of many of the destructive goings-on in the country to stupidity or evil. This post is somewhat of a continuation of our post Stupid vs. Evil and long-term conspiracy theories from over 3 years back.

Any conspiracy theories, really, elevate evil over stupidity as the explanation for things like the current BLM and antifa Commies taking over the streets. Peak Stupidity tends to root for, you guessed it, the latter. We did not select peakevil.com as our URL, the reader may have noted, but it is available, in fact. Jump on it, someone. Knock yourself out.

Our conclusions were that it's the long-term conspiracy theories, over centuries, say powerful families doing this or that to make things happen so many years hence, that are a bit far-fetched. That doesn't mean we don't think that, yeah, the FED was created by ruthless greedy men for long-term gain, just that they don't have some century-long plan laid out, at least that's ever worked. There's too much unpredictable change over time frames like even half a century that make it hard to make plans that work.

Then there was our self-rebuttal a few days later with Self-Rebuttal to our post on centuries-long conspiracy theories. I suppose that was Round 2, so that's why this post is Round 3. In that post we mentioned the Frankfurt School. No doubt those people had evil plans. Yes, most of what they planned came to fruition. We explained in that post:

To summarize from knowledge of the Frankfurt School from past reading, they were Marxists, and they had big plans to change society. They really had no power back when they started meeting in 1923 when they were associated with one actual university in Germany. They left Germany in 1933 due to the Nazi's hating on Communism (hey, who doesn't?) and ended up in New York City - that can't explain everything about the place, but it all fits.

To relate this finally to the conspiracy-theory post, this group had very much influence on American society and culture, completely to our detriment. Feminism, socialism, hatred of the white man, you name it: If it sucks, they are all for it! Now they've been pushing their cultural rot for a long time; it's been damn near a century since these sick fucks people got together. Was it a century-long evil conspiracy? Sure, the Frankfurt School adherents were well-intentioned, but one could say the same for many conspiracy theories also. Now, these guys and gals didn't make the kind of specific plans as you would think, like "Hey, you get Oswald to shoot, and I'll be over there by that grassy knoll." or even more long-term like "We get Congress to pass this, call it "Federal" Reserve act, then later we'll start just flat-out printing the money ...."

No, these people just had the same overall ideas, however erroneous, about how future society should be. They had adherents that could take over the meeting, writing, and infiltration of the institutions, but was that a big plan? Was it just a bunch of people thinking the same way over many years? Is that really a conspiracy? I think not - all that would have stopped their plans would have been millions of (more) Americans (than did) not putting up with the socialist PC crap at universities and social institutions, in governments, and in the consumption of media. People let this happen, and it was not per-ordained via an evil plan

Maybe it's just semantics, but the point was, and still is, that the Frankfurt School and other evil groups of people in the word did not make plans that would have worked without complicity by a million times more idiotic dupes in society at large. There's the stupidity.

George Soros and his minions are an example for us to observe today. There is lots of evidence that his money, funneled very carefully through serpentine channels is behind the antifa and BLM. (This is besides his other push for the pro-criminal D/A's and such.) VDare put up a great post yesterday by one Jason Kessler, organizer of the '17 "Unite the Right" rally that was attacked by antifa and other dipshit misfits in Charlottesville, Virginia. He write with great knowledge on the legal aftermath, a complete travesty.

In this latest post, about recent events, Mr. Kessler says, Yes, Virginia (Dare), It’s A Conspiracy: Antifa Thugs Arrested In Louisville Also Attacked 2017 Charlottesville Rally. Did Soros Pay Them? Where Is FBI?* The answer is YES for both of his questions per his detailed post. Mr. Kessler used the word conspiracy. I guess that is the case here. His modern-style post is full of photos, tweets, and vids (including our friend Tucker) to expose this backing of the antifa destruction by the AntiChrist who must not be named. The post ends with:

Americans face a violent interstate Communist conspiracy. Where is the FBI?

Wait, whaaaa? Where is the FBI? They are part of the story, just not on the side Mr. Kessler may have erroneously assumed. Why you'd imagine the US Gov't would be on our side in any way in this day and ages is beyond me. He's right on the money with the first sentence excerpted though.

Yes, Peak Stupidity, this is a conspiracy. No, but there is still plenty of Stupid to go along with the evil.


PS: Why do we link to and excerpt from VDare so much? Firstly, Immigration Stupidity is one of our biggest topic keys and VDare is the go-to site for all things immigration-invasion. Secondly, they really do have very good writers, with almost no grammar/spelling errors, links out the ying-yang, and lots of straight facts to go with the articles. (The only exception to that I've seen is the writer Lance Welton, discussed in Affirmative Action for the marble-supply-challenged.)

* To explain the beginning of the title, the reference, "Yes, Virginia (Dare)..." is from that 123 y/o editorial about a letter from his daughter Virginia to Santa, by writer Dr. Philip O'Hanlon, in the New York Sun. Additionally, Virginia Dare, the first English child to be born in the New World (of the lost Roanoke Colony in 1587). Once in a while, the VDare site will have an article with that idea in the title.

We are approaching Peak Evil with the help of Peak Stupidity. Too many small and medium enterprises and millions of livelihoods are being destroyed for this to be mostly stupidity.
MBlanc46
PS Our enemies are pretty well organized. All conspiracies are organizations, but not all organizations are conspiracies. If our side ever managed to get organized, we wouldn’t be a conspiracy.
Moderator
PS: I meant to thank you for turning me on to the whole Simpson's Blues album. I'd never heard of it before, Robert.
Moderator
PS: No, it's not just you, Robert. All of us on Peak Stupidity are autistic.

Thanks for the latin root explanation. (I ought to have put that in, defining the word before I try to classify what is or is not a conspiracy. I did take latin, so the two root words did ring a bell when you spelled it out.)

I don't know whether one could say the idiots at the University level, these antifa Commies the elite George Soros types, and the Lyin' Press journalists(damn, I was going to write something in the post about the Lyin' Press too) "breath together". The do work in their own ways toward the same ends, so ...
Robert
PS: This is possibly me just being autistic, But.

I am comfortable with extending the notion of a conspiracy to cover a group of Idiots, all motivated by a common spirit; but without any formal plotting or organization.

Look at all those idiots
Oh, look at all those boobs
An office full of morons
A factory full of fools
Is it any wonder that I'm singing
Singing the blues
Moderator
PS: Haha, Dave! Calvin and Hobbes was my favorite newspaper comic strip, but I didn't remember that one.
Dave
PS When it comes to evil, stupidity, and humans, the main character in the comic strip "Calvin and Hobbes" said it best:

"The best proof of intelligent life on other planets is the fact that they haven't tried to contact us."