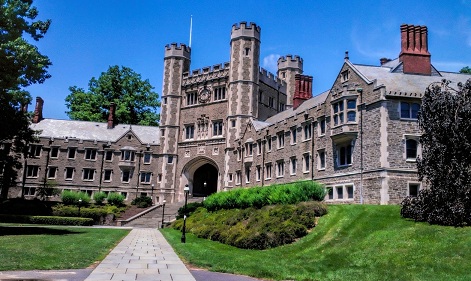 Now, if you don't know what this post's title is about, you may not know what a "petard" is either. Don't feel bad. We all know the expression "hoisted by his own petard", but we don't have to know what the word actually means. (No, I am absolutely NOT looking it up.)

That's what Princeton University is for - students are taught the origins of these idioms so that they can use them with pride... in nasty SJW tweets for the rest of their careers. That's the kind of thing you've gotta know to graduate Soma Come Lordy, along with making sure you bring up at least once each semester your background of struggle, what with your ancestors' hardships during the time of slavery. "It was hell. My family had this terrible overseer, see ... just horrible... they had to sell him for pennies on the dollar..."

The first sentence in this quick news article has the gist of this whole petard thing:

The Department of Education has informed Princeton University that it is under investigation following the school president's declaration that racism was "embedded" in the institution.

Embedded, like a youtube video telling the students "once you set foot on the Princeton Plantation, son, you'd best setcher mind to wanking". Now, that kind of embedded racism is against the law, see. You'd think in a fancy, expensive institution of higher learning like that, they could keep the racism off the campus. You'd also figure, even if not, isn't there, like, a whole legal department to tell the President when to shut the hell up about it?

Nah, with the Anarcho-Tyranny we have now, and without Bad Orange Man, you really shouldn't have to worry if you've been breaking the law for a few semesters, decades, whatever, as duefully disclosed thusly:

President Christopher L. Eisgruber published an open letter earlier this month claiming that "[r]acism and the damage it does to people of color persist at Princeton" and that "racist assumptions" are "embedded in structures of the University itself."

Ifflestay on the acismray, IsegruberEye. (We didn't NEED to go to Princeton to learn our Pig Latin [/nose to the sky].)

Nobody expects the Orange Man Inquisition!

According to a letter the Department of Education sent to Princeton that was obtained by the Washington Examiner, such an admission from Eisgruber raises concerns that Princeton has been receiving tens of millions of dollars of federal funds in violation of Title VI of the Civil Rights Act of 1964, which declares that "no person in the United States shall, on the ground of race, color, or national origin, be excluded from participation in, be denied the benefits of, or be subjected to discrimination under any program or activity receiving Federal financial assistance." . . . .

"Based on its admitted racism, the U.S. Department of Education ("Department") is concerned Princeton's nondiscrimination and equal opportunity assurances in its Program Participation Agreements from at least 2013 to the present may have been false," the letter reads. "The Department is further concerned Princeton perhaps knew, or should have known, these assurances were false at the time they were made. Finally, the Department is further concerned Princeton's many nondiscrimination and equal opportunity claims to students, parents, and consumers in the market for education certificates may have been false, misleading, and actionable substantial misrepresentations in violation of 20 U.S.C. § 1094(c)(3)(B) and 34 CFR 668.71(c). Therefore, the Department's Office of Postsecondary Education, in consultation with the Department's Office of the General Counsel, is opening this investigation."

Hahaahaaa! Do I see the hand of Donald Trump in this? I sure hope so, as this will very slightly ameliorate my disappointment with the President. Yeah, he's a bullshitter, and 95% of what he promises doesn't even get started, much less get done. Even this investigation will probably go nowhere. It's just that this handing of these people their asses based on their own bold hypocrisy is both fun and gets a lot of good attention to said hypocrisy.

"So, you admit you have been racists all along?" "Yes, Sir, we are now Woke, and we realize we have been doing damage to People of Various Colors for many, many years." "In that case, based on your written confession, you are in violation of 20 US One Zero Niner Four, Section c, part 3 paragraph B, along with the Code of Federal Regulations Six Sixty Eight dot Seventy one, stroke c. I remind you that ignorance of the law and illiteracy is no excuse!" "Book 'em Danno, Racism 1!"

Robert
PS: About 30 years ago I read a (then new) excellent book, ostensibly on the history of the dollar; but really a book about the periodic transfers of wealth from the citizens to an ever decreasing number of people, using the Federal Gum-mint and Central Banks. I wish I could remember the title.

1. The Constitutional Convention (although well done by the actual participants) was called to form a central government capable of paying off the various states Civil War debt. But only after most of the bonds had been bought for a small fraction of their value by "investors" to "help" the farmers who had financed the war in the first place.

2. [The Congress shall have Power . . .] To coin Money, regulate the Value thereof, and of foreign Coin, and fix the Standard of Weights and Measures; . . .

But States (or even local banks) could 'print' money, if anyone would except it. Few did.

The powers not delegated to the United States by the Constitution, nor prohibited by it to the States, are reserved to the States respectively, or to the people.

Thus, the Federal Gummint could NOT print money. Nor could they delegate this power to others.

3. The Whiskey Rebellion. All commerce must be taxed and controlled centrally.

4. A couple of Central Banks to "rationalize" the economy, to the benefit of the bankers and their rich friends. The beginning of a debt-based financial economy, rather than a productive economy.

5. The War of Northern Agresion and the use of fiat currency.

6. Another Central bank or two.

7. The Fed. This time there would be no escape for the common man.

But the book ended with the U.S. entry into "the great war".
Perhaps more recent history would have made the book unpublishable.
Moderator
PS: Here, these guys took it directly from ZH:
https://sandrarose.com/2020/09/the-fed-prepares-to-deposit-digital-dollars-directly-to-every-american/

Not even counting the Socialistic stupidity of this FED run "recession insurance", it sounds like the FED envies the CCP of China very much.

"Once physically currency is replaced by digital dollars, the Fed would then be able to scrap "anonymous" physical currency entirely, and track every single banknote from its "creation" all though the various transactions that take place during its lifetime. And, eventually, the Fed could remotely "destroy" said digital currency when it so decides.*

Oh, and say goodbye to your banks, as the Fed would both provide loans to consumers and directly deposit funds into their accounts, effectively making the entire traditional banking system obsolete.*"

KILL! THE! FED!
Moderator
PS: Jeidi, aka " ", aka Hridi, I am so sorry that I can't look at your suggested article. I about pasted it in, too, but I remembered that Zerohedge will likely crash this computer. I only look at it on other people's computers now.

I'll look for the story somewhere else in a second here...
Moderator
PS: "Oh man, I think the clock is slow
What are you doin' this weekend?
I don't feel tardy...."