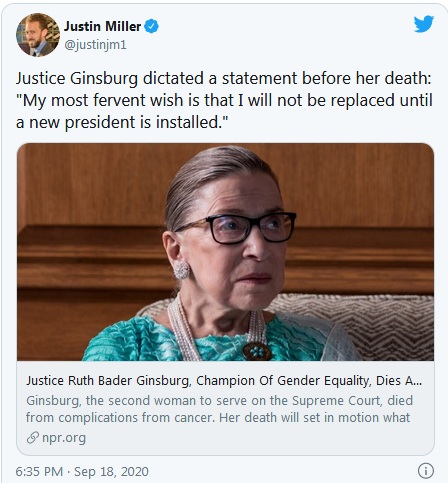 I wish I could say I knew for sure this tweet was really written by some zealous aide, or the guy from NPR at the bottom. (A lot of weird shit can go down there on the death bed.) I write that because, I really had a small bit of respect for the late Supreme Court Justice Ruth Ginsburg* before seeing this on Steve Sailer's post regarding this latest development.**

I know I couldn't find it easily, as I don't even know what TV talking heads type show it was, but I was pleasantly surprised by what this lady said during one of the latest contentious SC justice nomination confirmation hearings. It was one of the two Trump appointments, I'm sure, so it was fairly recently. The talk was about the huge political battle that was going on. Mrs. Ginsburg noted that 2 - 3 decades earlier, with her confirmation in 1993 as an example, the Senate did not make a deal out of this process. It was just a procedural matter, with perhaps your serial child molesters and murderers weeded out. As left-wing as Ginsburg was, she was confirmed by a 96-3 vote. (The Senate was 57-D, 43-R at the time.)

The late SC Justice was very fair in her assessment that there is way too much politics involved in the Supreme Court confirmations now. I just looked through a few of Mrs. Ginsburg's positions on cases that came up. There's no doubt she was a bright lady, unlike the other 2 broads, Kagan and OscarMeyer there... Intelligence ain't everything, though, and this left-winger was a bad thing for this country, at least most of the time when her vote put a case over the top.

Now, this tweet makes me less concerned about speaking ill of the dead. So what that she can't stand President Trump? His 2 SC picks so far have not been out of the ordinary at all, and I could use a LOT MORE out of the ordinary. I don't like this vindictiveness right up to the end. Was Ruth Ginsburg's life about nothing but politics?

Well, can a guy get pushed through in 6 weeks? I doubt it, so this is another reason to vote for Donald Trump, incompetent bullshitter that he is. If I could tweet, I'd tweet a copy of my mail-in ballot back to this lady. What happens to tweets when the originator is dead? Nobody ever explains that stuff to me.

One more thing: Mr. Sailer mentioned a topic near and dear to the heart of Peak Stupidity, and that is the flags at half mast business. First of all, I haven't really checked lately, but haven't they been at half mast for the Kung Flu, in remembrance of the heroes or something? That'd make it a bad time to die if you like recognition. As we discussed in I'd thought we'd bid Farewell to Kings, this half mast business is getting out of hand! If I ever get a flag pole, it'll be to fly the Gadsden or Rebel flag. However, if I were to put an American flag up, I'd just go ahead and get a shorter pole (that's what she said!). Why waste all that aluminum, what with the climate and all ...


* No, she doesn't need 3 names. She's not some Hollywood movie star.

** Yeah, that's the ONLY reason this post is timely. I was scanning through Steve Sailer's latest posts. I'm really surprised Mrs. Ginsburg didn't rate an R.I.P. from Mr. Sailer. He is usually too much on the polite side, in my opinion. He probably wrote "R.I.P." upon the death of Fidel Castro, the way he is... that was before I read his blog, I think.

Moderator
PS: Now if only a bucket of water could take care of the other one, the Hildabeast, Wicked Witch of the Northeast.
MBlanc46
PS Ding Dong!