The case of the jacked-up jack 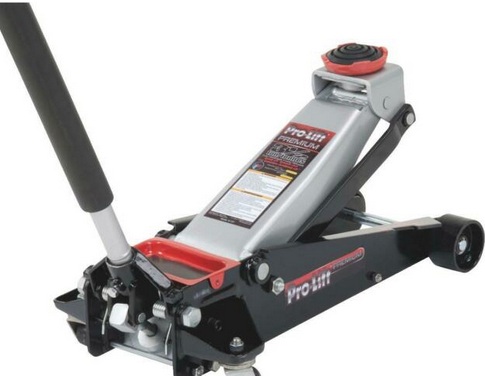 I'd had another fisking of feminism post in progress, to be completed later on, when I got interrupted by daily life. This stupidity is on me, but I don't have a category for that. I had a nice easy-going car project going on, the bleeding of the brakes. After running into a snag, it was all going nicely, and I was headed toward the 2nd brake.

My 9 y/o boy got on the jack to lift himself into the air (nothing new - I showed him that a coupla' years ago), after I'd gotten the car jacked up for my 2nd wheel. As soon as I realized I'd need to bring the car back up a bit more, after getting use of the thing, I realized the jack didn't work right. Fluid was leaking internally as the jack kept backing down.

Crap, I knew it right away! "Did you turn that thing the wrong way?" (Too far?) He admitted to such, and I knew it must be something with that release valve, activated by rotating the handle. One thing I HATE HATE HATE is getting interrupted from one job due to having to fix a tool in use, and this job was going smoothly at that! Peak Stupidity covered this bit of curmudgeonry near our blog's beginnings, in Brilliant plan by Chinese Communist Party Cadres pans out well. That post was a semi-facetious conspiracy theory about the Chinese and the Cheap China-made Crap (our very first topic key, per the dBase, haha! Wonder why?). Hey, it's a damn sight better than a lot of other conspiracy theories I've read of recently.

OK, here's the stupidity on my part - it's not about the jack. "Please don't try to fix it", said not my wife, but my inner voice. No, that wasn't some female alter-ego ready for an operation, but just my common-sense telling me not to take on another project. See, I have had another brand-new floor jack sitting in a box that came from China via harbor freight. As (another post coming!) I like to keep the good old American-made stuff, though, I wanted to fix this thing anyway.

I would have sworn this trusty old jack was made in America, as I know I've had it since 1996. How I know that year exactly, without looking in any records, is that I remember what year it was, due to what I was doing there, when I smashed into a farm implement after which my tie-rod was bent so badly that I could barely, well scarily, do 50 mph down the highway, by the auto parts store for the jack, and make it home. This jack has done a stand-up job for that whole 24 years, whenever I needed it. It deserves to live, man!

OK, so I dove onto the web, youtube, diagrams, whatever, but I can't really get to the gist of how this valve works. I even found the paper manual from the day I bought it, and there's no good diagram. It does happen to say "don't turn the handle more than 3 turns the other way". Damn, but what gives then? It's a seal or a steel ball has gotten out of place, or something ...

This really ruined the evening. I did apologize to the boy for being mad, as I never told him not to screw with it (literally) in this manner. "Clockwise to tighten, got it?" It's just a thing that happened that will produce likely another white elephant-like thing hanging around, if I don't figure this out soon. I can go right back to my brake job tommorrow with my new made-in-China jack, but, yeah, this one was made in China too.

That is really surprising. I have a good general memory for when I noticed the proportion of products being made there. As Peak Stupidity noted also in Inflation and Chinese Imports and Exports, the quality of Chinese-made goods was better 20-25 years ago. I don't think it was as good as American stuff, especially for really engineered products, but shirts from Wal-Mart seemed to be pretty damn good (some have just worn out in the last 5 years).

My theory is this: In the early part of the giveaway of American manufacturing and know-how to China, the cheap labor alone could keep prices down with Big-Biz making the same or higher profits. However, "you can't stay in business if you don't keep growing", one of the bigger statements of bullshit I've been hearing over the years, meant that something else had to give to keep corporate profits steadily increasing. That was quality.

I apologize to any Chinese readers for attaching the "Cheap China-made Crap" topic key to this anecdote of the jacked-up floor jack. Really, this was a great product. That's why it does not deserve to become a white, well, rust-colored elephant.

Now, what the heck this has to do with the price of tea and crappy floor jacks in China is anybody's guess. More stupidity will come tomorrow. There's always tomorrow, tomorrow ...

I've had really good luck with harbor freight tools, though recently I did have a small impact wrench blow out after 9 or 10 years of use.

☮
Moderator
PS: Don't make me go to Harbor Freight again, please! I can't help myself in there.
MBlanc46
PS If it weren’t for cheap China-made crap, we wouldn’t have no crap at all.