We couldn't have found a better title to pick for this post. It was a softball right over the plate. See, we at Peak Stupidity usually spend a lot of time on this sort of thing, explaining why the software is still on Rev 0.1. 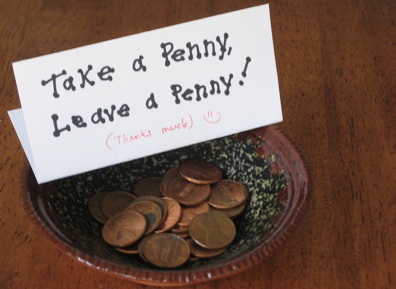 I looked at the bank statement today. Luckily there were no bogus charges, ones I've had to cancel a debit card for, as there have been more of them lately. Nah, it was just this odd 3¢ deposit. Whaaa? It was on the same day, hence the same time, when I had cashed some small checks while I was there.* The line of text was clear enough though: "Change left from member". ("By member" seems like better English to me, but what do I know? I'm no banker.)

I know exactly what happened. I just don't carry pennies anymore. If I get any in change, I leave 'em. That could be in the trays and such like the example up top. If there's absolutely nowhere to put them, I'll throw them in the bushes. I always like to think that a little kid might be excited about finding them, so long as he's young enough to never have heard of the Federal Reserve. Normally there's some place to leave a few pennies, even if just on the counter.

The problem I've run into is that the cashiers will often grab them and put them back in the till. I don't bother to argue anymore, but my point is to leave them for someone who wants to use them to avoid getting any pennies back. So, I'll slide them to where the cashier can't reach them... only tryin' to help, Ma'am.

That's what happened, but the teller spent the effort to put these back in my account. First of all, sure, that's very nice, I guess. Additionally, it being a bank, the employees are required to be very fastidious, so the numbers come out right. That probably was the point, but someone could have thrown them in the trash. Then the numbers would be right to the penny again. They've got to know I'm not gonna do a uey** after driving a mile away, put a face mask back on, and come back in to get the 3¢.

It's that face mask part I just mentioned that makes me wonder if this was yet another artifact of the Kung Flu Panic-Fest (Season 2!). We can't have another customer touching those pennies, so put on some gloves, spray the pennies down, wipe them good, then very carefully, let's get them into the cash drawer. Whewww! Virus narrowly averted!


* Our healthcare plan company sends roughly 5 to 15 dollar checks of odd amounts almost bi-weekly, even with no trips to the doctor, thankfully, for which I could see some sort of odd rebate at least. I don't know, I don't want to know, I have better things to do then pore through their paperwork, and I'm sure they come out very well on whatever's going on.

** I could not think of how that could possibly be spelled. Thanks, wiki!

Robert
PS: Mr. Ganderson, A friend of mine had been doing that occasionally; but he made the mistake of taking paper money one time. The store's owner made him call his mother to ask if she had given him the money.
Ganderson
PS. I got my candy money out of my mom’s purse, at least I did until the guy who ran the Ben Franklin told my mom that I was coming in every day to buy candy. She was not pleased with me.
Robert
PS: Mr Ganderson, Mr. Moderator,

I don't remember candy bars being a nickel, but I do remember being outraged when they went up to 7 cents at the corner candy store. This was WRONG! My parents would not increase my allowance to compensate. Adults were MEAN and did not UNDERSTAND!
Ganderson
PS. You could get two licorice twists for a penny in the 60s; or two of those big round coin like things that were red. There was a Ben Franklin store in my neighborhood that had a big candy counter. Ahhh, happy days.
Moderator
PS: Mr. Ganderson, that was the same for me - people were ashamed about picking them up. One could get the same size gumball with a penny in the 1970s that takes a quarter now. Boy, someone figure the annual inflation rate on THAT one.

OK, here ya' go, per moneychimp, taking the mid-1970s, it's been 7.5% compounded. But then, I'm all about Bazooka Joe, when it comes to bubble gum. He was ahead of his time on the virus prevention, plus his jokes were ...well, pretty lame even when you're 10.

It's always good to keep a few for the train tracks. We found 2 the other day, one of which a wheel must have caught just the edge of, and one which was flattened and curved nicely (flatten the curve!)
Ganderson
PS. Way back in prehistoric times, we used to throw pennies at kids we didn’t like. If they picked them up we’d taunt them with “Bobby dives for ‘browns’, Bobby dives for ‘browns‘.... and that was back when one could actually purchase something for a penny.
Moderator
PS: True, Mr. Blanc. It’s not even a problem at all, really, but just silliness. I see these people being conscientious as all get out about something like this but oblivious to the serious stupidity around them. Some of that is at the very same bank, but that’s another post...

What this reminds me of, for some reason, is when a different bank would try to convince me on every month’s statement to go electronic, to save the trees, yet the 2nd page of the statement was a couple of the same lines of unnecessary writing every time. Yes, also a 1st World problem.
MBlanc46
PS I believe that this falls under the heading “First world problem”.