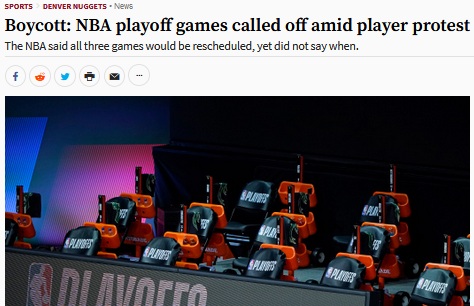 Hell, I didn't know if they were playing or not anyway. Even before the Kung Flu Infotainment Panic-fest, I haven't known who was playing whom for the last 10 years. This is about something someone did somewhere to some black guy, isn't it?

If the cut-off of the Circuses part of the Bread & Circuses (with the "Bread" part taking a pretty big hit lately too) wasn't enough to turn regular Americans off the sportsball, perhaps this boycott is.

Look fans, the owners, the TV people who make lots of money off of it, and most of the players themselves are telling you that they actively hate your kind. It's bad enough you are rooting for mostly thugs who you wouldn't want anywhere near your family unless you are King of the Cucks. Now, they are siding with the 1/2* of the people who are in the process of destroying the inner cities, OK, what's left of them, of America. Really, you want to keep supporting this shit.

On my end, the TV has not been getting signals to it from other than the DVD player with movies I select for decades now. None of this concerns me in any way. If nothing else, at least the money to be saved by turning off those huge floodlights is coming out of my pocket in some way.

Americans ought to think about sports as being something you get out and PLAY, not something to veg out on the couch and watch. Could that be changed by the Kung Flu LOCKDOWNS and this scary boycott by your favorite thugs? We can hope.

I vaguely knew him in the mid to late '70s. He was a regular customer at the Hardware Store I worked in. If I was at the other end of the Service Department, and he wanted my attention; he would take off his leg and pound the counter. He also demonstrated how he had carefully sculpted little holes in his cork leg, so that the cigarette butts would not fall out, by waving said leg around over his head.

A real American, back when sports were fun.
Not Sure
PS Sportsball is still a thing?
I might watch Monday Night Rehabilitation if Beef Supreme and preezy of the steezy Mountain Dew Camacho are there.
Wearing another man's jersey? Bwahahaha!
Something that the cheerleaders did in high school.
Even then we knew that Jonny Jockstrap was a heel in the real world.
Moderator
PS: Yes, Mr. Blanc, I know you spent some time in England. You'd think carrying around that cricket bat around all the bases would slow one down, I dunno...

Yeah, an occasional outing at the baseball park, minor league is fine once in a while. Otherwise, NADA for me.

I wonder if the sports business even cares what we think, so long as cable TV is still bundled, as in, ESPN, etc, get their money, so long as you subscribe to anything. The merchandise franchising or whatever is big too, so if people quit buying those jerseys with their thug's numbers or hats to "support the team" maybe that'd help with the downfall of all this.
Moderator
PS: Mr. Smith, I know I'm not almost alone in this now, as I thought it was close friends of mine who would agree.

If American men could only get as clued in and passionate about the political stuff that's destroying this country as they do for the college rivalries, things would change in a Kenosha minute. I've seen guys close to shoving and blows when arguing about the sportsball at tailgate events and what-have-you. They would stand up for themselves regarding their team's passing game more than they would being discriminated against in hiring, or having their tax money used to support other people's kids, or now, being told to wear masks everywhere.
MBlanc46
PS I gave up on pro baseball after the 1994 lockout and the sequelae. I’ve never been much into American football or basketball. I retain something of an interest in cricket, but the best that one can get is a ball by ball account of international matches over the Internet on CricInfo (now owned by ESPN). Nothing like sitting in the Pavilion at Lord’s on a sunny* afternoon watching Middlesex v. Whoever, and anticipating a pint at the bar during the interval. So basically, I have given up on sportsball spectatorship. I know others who have done likewise. This cannot but hurt the leagues and, therefore, the players. It couldn’t happen to a more deserving bunch. It’s almost certainly too much to hope that the wound is fatal.

* Okay, a gloomy and threatening afternoon. It is London that we’re talking about.
Adam Smith
PS: AGREE! Just END IT, already!

I haven't watched sportsball in decades either. I don't miss it and never really cared much about it. I'd rather go casually shoot some hoops, or do just about anything else, than watch sportsball on the idiot plate.

But, many average Americans still love the sportsball. Some are very passionate about it. It'll be interesting to see what happens when they take the circuses from the proles.

I wonder what they'll burn next.(?)