Unitarian Stupidity - it's how they roll at the UU - Part 2

What has now become Part 1 is a long ago post regarding the Unitarian Church's virtual signalling displays of BLM and Pro-immigration-invasion. That was almost 3 years ago, during an earlier round of the BLM BS.

The UU Church's main dogma is that there are one or fewer gods, and that's about it. Many of the members, undoubtedly Mary Moon* being one, believe in Karma. I think some of that not-so-instant karma, but within the standards of modern day court justice karma, has come down on the Kenosha Unitarian Church: 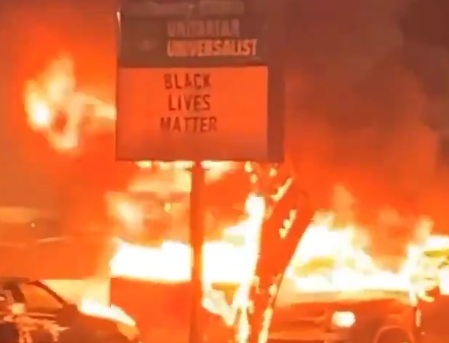 This is kind of a cheesey sign, this plastic type, for any church, because this UU one is was not in any strip mall or anything**.

I had read Mr. Steve Sailer's post on unz.com, Wisconsin Governor Urges, in Effect, Blacks to Riot, but only just looked at a 7 second tweet on VDare, here. Mr. Sailer has always been a bit too pro-cops in his writing for me, but there are 2 sides to every story that should be listened to before the rioting is to start.

I don't know about the Commie antifa crowd that has been driving from all over to help start and continue the rioting in many American cities, but the black looters ought to like these Unitarian supporters. They are down with you homies - they've got big signs on the church where I live, and note the letters on the plastic sign in the picture above. The other night though... dayum, nigga, look at that sheeet!

Gotta be tolerant, brothers. The Unitarians out-tolerate all other Churches around. Fires, pssshaaaw, it's Social Justice, man. Gotta tolerate those BLMers and those Commies. We can rebuild the sign - we have the stupidity. That's how we roll at the UU.

* Yeah, I put the song in that previous post, and I know it's not "She's a Unitarian" but "She's a vegetarian" in the lyrics, but that's how I hear it - it's just as good.

** I wanted to check it out, and maps.bing.com got me a nice aerial, then this street view from July of '19. This is not any cheesy strip-mall church. It looks very nice, especially when unburnt. (OK, the fire only got the sign and cars in the parking lot, as far as I know.) The sign is not in this picture, so, I don't know... talk to the sign committee. Was that BLM message put up there to keep insurance premiums low?


This is definitely the one - Bradford UU Church:

*This is sentence now...

☮
Mblanc46
PS The fellas don’t care if you are “down with” them. Unless you are one of them*, they are not “down with” you.

* That means, first of all, black. But it also might mean “who you with” or what block you live on or which public housing building you live in. They are very tribal.
Moderator
PS: Just started watching Tucker from 08/24, per Hail (yeah, your link was already to a removed one). I see the fire was definitely only burning the sign and a few cars.