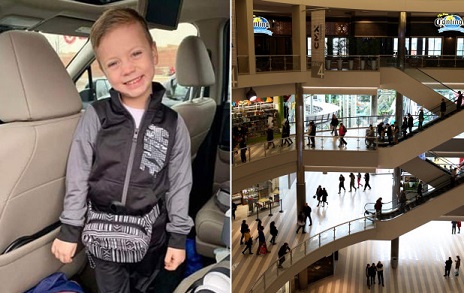 An article by Steve Sailer on that shooting of the 5 y/o white boy by a black neighbor made me think again of little Lqnden Hoffman of Minneapolis, the 5 y/o boy (6 now) who was thrown of a balcony down 3 stories by some crazy black man "looking for someone to kill". I'll link to that in another post on the matter, but it just happens to be 2 weeks since Peak Stupidity's post on this, Little Landen in Minneapolis.

I meant to write a lot more about forgiveness (or lack thereof) and whether the Christain religion, at least the modern version, IS really going to be the downfall of white civilization, as I've read commenters argue. I'll leave that for another post to come next week.

Right now, I'll just mention that I read today very good news about this boy's recovery. Though he had lived, things looked very grim for the boy's full recovery last year, per the post linked-to above. He's just one boy, and bad things happen even to good little innocent children every day, but I am so glad about this.

I had a newer site page pulled up on a different computer earlier, but this Atlanta Journal-Constitution article from around Thanksgiving of last year is about the most recent proper article I can find. The world "miraculous" was used in that post I can't find anymore and in plenty of others. I'll let the kid speak for himself:

“He tells people all the time when they get hurt, don’t worry, I fell off a cliff, but Angels caught me and Jesus loves me, so I’m ok and you will be too!" reads a post on the site from Nov. 22.

The boy is walking normally, and the articles I've seen don't mention any permanent health problems that the boy would have to deal with the rest of his whole life. This is great news.

Moderator
PS: Agreed about the sentence. That's getting to what I wanted to write about. You may be very forgiving but you're not helping out this world by letting guys like that get out of, well, the death sentence were it up to me.

The niceness is killing us slowly.

Yes, Mr. Blanc, I was pleasantly surprised. I knew the boy got out of the hospital, but I didn't know he was doing this well. I could find no articles from this summer - that's because it's good news, I guess.
Adam Smith
PS: Good morning Mr. Moderator...

It's not really christianity that will bring about the downfall of white civilization.

Whites have more empathy, honesty and altruism and we are less aggressive, which is fine, even good, when dealing with our own kind. It's the kind of stuff a peaceful, high trust society is built upon.

Unfortunately our altruism and generosity have been weaponized for use against us by those who are more aggressive and ruthless.

And (so far) we've been too nice to do anything about it...

As too many whites are afraid of being called names we cannot even talk honestly about the situation we are facing let alone the solutions to the problem.

It's good to hear little Landon is recovering.
I hope his recovery is full and complete.

Perhaps he was caught by angels.(?)

19 years, eligible for parole after 12, is far too gentle a sentence for the monster who attacked this innocent child.