The Horrible Legacy of Slavery Continues ... 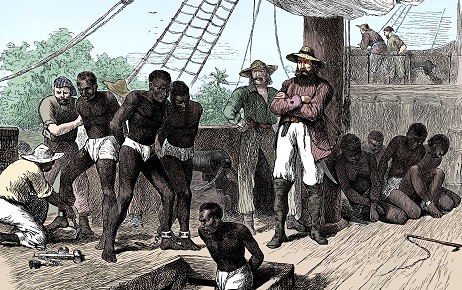 (Note: May not be the same exact slavers as per news stories mentioned herewith.)


I guess it's not a legacy anymore, come to think of it. Damn, this resets the clock in the neighborhood of 165 years back. See, slavery is still on-going in the United States, contrary to popular belief and the strict stipulations in Constitutional Amendment XIII. Worse yet, it's in the North now. Well, I never! Are the Northerners out of their cotton-pickin' minds?!

Peak Stupidity has mentioned before, in the Amend. 13 post linked-to above for example, that VDare has posted articles about slavery in the US a number of times. I really have a hard time searching for stuff on that site (using their own "Search" feature), but the recent article I read by regular writer James Fulford points out another instance of this practice. From an unz commenter, I was linked to another recent case.

Mr. Fulford, in Sunday's article reports on a story from suburban Chicago (do they still call it all "Chicagoland", Mr. Blanc?). Let me just give Mr. Fulford's source's title, then his own title. They are "Suburban Chicago Family Forced West African Kids Into Forced Labor: Feds" and "West African Family Enslaving Suburban Kids In Chicago", respectively. Ha! Well, in a way, I guesssss... they are both true, but really, that's just how you lie nowadays when you are known everywhere as the Lyin' Press.

Nawomi Awoga*, 71, of Hazel Crest, and her two daughters, Marina Oke, also known as Marina Fandohan, 34, of Country Club Hills, and Assiba Lea Fandohan, 31, of Hazel Crest, are charged with conspiracy to conceal, harbor, and shield from detection two children from the West African country of Benin, according to an indictment returned in U.S. District Court in Chicago. The indictment also charges the defendants with forcing labor through threats of serious harm to a victim or another person.

They were arrested Monday.

According to the charges, Awoga coached the victims, then age 14 and 12, in Benin to lie to U.S. immigration authorities about their family relationships in order to obtain tourist visas, and then accompanied them into the United States. Once in the U.S., the defendants harbored the victims in residences in the Chicago suburbs of Country Club Hills and Hazel Crest while the victims were forced to provide labor and services for the defendants’ financial gain, the indictment states.

"Come for the opportunities. Stay for the till you die working for the man... or woman!"

Then, just 1 day later, per the Contra Costra District Attorney's office (east of S.F. Bay, north of Oakland, specifically, the city of Martinez), we learn that slavery has been going on there too.

In this case, a woman was recruited from outside the United States to be a nanny for a family with young children in East Contra Costa County. Defendants instructed the victim to obtain her passport and visa fraudulently and claim she was coming to California for three weeks as a tourist to attend the wedding of her son and the defendants’ daughter. Because of her economic circumstances, and fear that the job opportunity would be given to someone else, the victim followed the instructions she was given. She was not aware of her legal rights to minimum wages, breaks, overtime or employment conditions under California law.

When the victim arrived in California in April of 2017, defendants took possession of her passport and visa. From the time she started until October of 2018, the defendants required her to perform work beyond what she was hired to do. She was required to sleep on the floor of the children’s room so she could care for them round the clock, to cook for the entire family and clean their 5-bedroom house for no additional wages. They did not provide the victim with breaks or days off from her work responsibilities as required by California Law. The defendants never paid her overtime for any of the additional hours she worked and continued to employ her with knowledge that her visa expired. This made the victim a particularly vulnerable worker without immigration status who was fearful of deportation.

It's horrible man, as I thought we had this shit licked the Night they Drove Ole Dixie Down, but someone dropped the ball a while back ... cough, cough, the 1965 Immigration Act, cough...

Remember that old underground railroad, from the mid-1800's? I wonder what it would take to spruce that thing up and reverse the polarity of the DC circuit. Could we get these people down to Mississippi or South Carolina, where they still abide by Amendment XIII? It may be harder to get the folks out of California though. Rail has gone to hell in this country since the 1930s Streamliners. Per that post, the Chinese are really kicking ass, railway-wise, and may be able to provide us with some cheap or maybe even free Coolie labor ... nah... scratch that... forget I mentioned it, even.

If nothing else, this is a perfect instance for the Peak Stupidity Reparations Plan to be invoked, with extreme prejudice. [Note from PS Legal Team: that term is not applicable here.] <--- Screw you guys, I like the movie, and "extreme prejudice STAYS IN! Yeah, now there are actual live slaveholders and slaves to be made whole, and per PS's plan, "reparations contributions will be pro-rated based on years of slaveholding practices, while reparations payouts will be pro-rated by years of jumping-down-turning-around-picking-bales-of-cotton."

Moderator
PS: Yes, "the Chicagoland area" is redundant, Mr. Blanc, and now, to piss us both off further, FedEx, shortened from Federal Express is now FedEx Express. I kid you not.

Now, if the States can just start ignoring most of the Amendments since the end of the Bill of Rights, we'd be getting somewhere. I haven't put up a "Morning Constitutional" post in a while, cause it's just pretty depressing. Americans really should have just left it alone!
Moderator
PS: Wow, Adam, that is quite a hefty salary, even for California! They should have been able to afford a domestically-sourced slave. Think globally, act locally, is what I say.

No, I guess Americans just won't do IT management for under $1/4 million a year. This smart ass remark of mine reminded me of when some politician, I think it was our favorite dead man, John McCain in fact, who told the media that Americans wouldn't work for $50 / hr. He was referring to farm labor, but I'm pretty sure 95% of us would spray termites in tight crawl spaces or clean toilets for that much. There are people that live on a whole different level.

Thanks for checking into the details.

The cough will get better when I can speak my mind freely. "This mask crap is cough, cough bullshit, cough, cough..."
MBlanc46
PS “Chicagoland” was a term that the late Colonel Robert McCormick (of the McCormick reaper family) tried to make popular when he was the publisher of the Chicago Tribune (which used to bill itself as “The American Paper for Americans” and the “World’’s Greatest Newspaper”). I believe that the expression is still used by television news readers. I prefer “Chicago area”, but what I really hate is “Chicagoland area”, which I often hear.

Regarding slavery, one might maintain that since the rest of the Constitution as been spat on and ignored, we might as well ignore the prohibition of slavery, as well.
Adam Smith
PS: Good morning Mr. Moderator...

Public records identify Ijeoma Chukwunyelu as an “info system project manager” employed by Contra Costa County. In 2019, she was paid $228,984.10 in salary and benefits, according to Transparent California.

I suppose she's just another one of those Africans from the dark continent doing the work that the legacy population won't do, managing projects or something. America needs more Nigerians! They're just like us, only better.

I would love to hear his sermon on Ephesians 6:5...

I guess they didn't realize that the "government" maintains a monopoly on the use of involuntary servitude, does not like competition and really does not care that owning slaves is a status symbol in Africa.

You might want to get that cough looked at Mr. Moderator,
I hear there is a pneumonia going 'round...