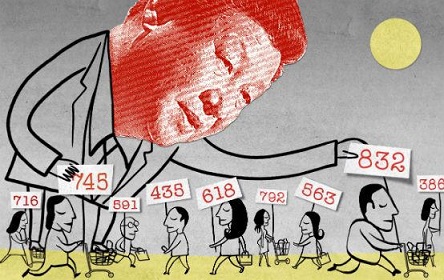 From my Chinese sources, I've got information on the Orwellian state of the place, and I'm kinda glad to have not been there in a while (we were supposed to go this summer, but that's completely out*). I think I would not like what I'd see. That's after having already been disappointed but what I've seen over a decade and a half (see Dashed Hopes for China - Part 1 and Part 2).

The deal is that anyone who is in the least iEspionage-savvy, meaning likely anyone under 60 years old not living out in the sticks (whatever sticks are still left out there), is using his smart phone for payments. I was told that if one wants to take out a serious amount of cash out of the bank, say 元 100,000, or ~ $14,000, one now has to get paperwork and signatures, as impediments set up to make this difficult. The Chinese people are taking to this big convenience of cashless transactions very well.

Come to think of it, Peak Stupidity has posted about this already recently in a small section of the post Big Trouble in Little China. This was just confirmation that for most people over there, Cash is no longer King, and that is a 180-degree change from only a decade ago. 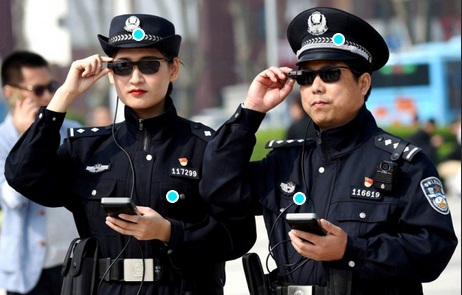 Then, the word is that the COVID-19 worries have been the impetus for the Chinese to implement a contact tracing program that beats hell out all the minor programs that have been tried here in America, for comprehensiveness. It's nice not having a competent government IT Force, isn't it? I guess the apps are required on the phones there (as I don't see another way), to make sure that everyone has color-coded "health scores" now, due to the fears of the Kung Flu, you know, but, hey, maybe we can keep this around ... for the next time ... and forever.

Yep, there's green when you are at home in a non-Kung-Flu zone, but it will turn yellow if you enter Zhejiang, for example. Zhejiang has some cases of the Kung Flu, so if you step across the border a foot or so, well, one can't be to careful ("one" being the CCP government). You will only get your health score back into the green if you quarantine for 2 weeks and then leave the province without passing GO. ("Go" means "dog", so forget the Monopoly reference - it means don't eat anything that used to fetch someone's slippers.) I suppose if you get sick during these 2 weeks, you can keep an eye on your red status from the hospital. Purple or black means someone is already bidding on your piece of iEspionage from your estate. OK, I made up the last part.

The Chinese people are falling for this Orwellian stuff because they know no better. Granted, many of the Millennials here have no clue what privacy and freedom are all about either. Others are learning from those of us who remember something about them.** Meanwhile, in China, and as Peak Stupidity covered in Citizenship in the Nation, one can go back 3,500 years and not learn of anyone who really understood what we know and knew 50 years ago. Old and young, the Chinese people are getting sucked into the "convenience" of all the iEspionage crap, because they have ZERO history of knowing any better.

Social credit, health scores, cashless buying and selling ... This Orwellian and straight-out-of-Revelation business is something Orwell, an Englishman, expected out of his own country. He was not wrong, mind you, other than being off by a few decades, as formerly-Great formerly-Britain has the Ministry of Truth aspect of it down pat. However, China is now #1 with a bullet, at Billboard magazine would put it, if they had an End Times top-100 chart. (Of course, number 3 would be The Calamity Song by The Decemberists and number 2 The End of the World as we Know It by REM.)

Here's what's considered one of the very few references to China (also "land of Sinim" in Isaiah 49:12), from, you guessed it, the book of Revelation.

And there appeared another wonder in heaven; and behold a great red dragon, having seven heads and ten horns, and seven crowns upon his heads.

And the sixth angel poured out his vial upon the great river Euphrates; and the water thereof was dried up, that the way of the kings of the east might be prepared.

I dunno, I can't make heads, horns, or tails out of most of this. Where's Nostradumbass when you really need him?

* One would have to quarantine in the big city (Shanghai, Peking, or Hong Kong) for 2 weeks, even after making a 3-5X more expensive and twice as long journey to get there. This is at one's own, or company, expense, including the hotel room that one must stay in the whole time and meals served to the room. This goes for Chinamen/women or foreigners. (Knowing the Chinese business mentality and propensity for corruption, I wouldn't be surprised if this is a deal between the Chinese Gov. and some hotel chains to keep them booked!)

Oh, then there's a 2-week quarantine at any final destination. How are they going to know, if you got a car ride, you ask? There's that Orwellian tracking business again ...

** That's another part of the silver lining of the Kung Flu. With the schools closed, and even in the Fall most being conducted remotely, meaning no real contact, kids are getting a chance to learn from their parents more directly again. For a large majority of them, that's a good thing. The Deep State and Globalist elites have got to hate this part of it - ooops!

Moderator
PS: Yeah, I was in agreement anyway regarding Chinese civilization, but I've just switched the 5,000 years that I'd heard to 3,500 years due to hearing from somewhat I consider near an expert on the place.

About, C/S America, yeah, that's about the size of it.
MBlanc46
PS I won’t argue with Derbyshire about China. Whichever it is, they’ve been liking emperors for a very long time. I don’t really consider Latin Americans to be civilized. What civilization they have is due to Europeans. Without Europeans, they’re just Neolithic barbarians.
Moderator
PS: Per John Derbyshire, it's only been 3,500 of the same continuous civilization over there. That's from a direct comment to me under one of his(?) unz posts a good while back. Well, that changes EVERYTHING! Nah, I'm sure he knows what he's talking about though.

Anyway, I do wonder how materialistic the people were before the 40 years of hard-core Communism starting in 1949. (Of course, they had 2 decades or so of rough times before that too. Hell, their whole history is a rough time, IMO.)

Good point, but where do the Latin Americans stand on this spectrum? They never seem to have seriously observed rule-of-law, but yet they don't revere their leaders a whole lot either. It's the usual, next time we can get up a revolution, we'll get our guys in - they may be corrupt mofos, but they are OUR corrupt mofos.
MBlanc46
PS My Chinese history is pretty slender, but from what I have read, it appears that the Chinese people like emperors. They have had one for something like 5,000 years. Some people got the impression that in about 1980 the Chinese gave up on emperors. But it’s pretty clear by now that those people were mistaken. Or, perhaps, that their materially-motivated falsehood has been exposed. It seems pretty similar with the Russians. In fact, of the civilized peoples (Asians and Europeans), only the Northwestern Europeans have seriously abandoned the monarchical principle.