Anarcho-Tyranny at the Support-the-Police rally. We're finally on our own.

I'd meant to post about the latest Michelle Malkin column last week. She has done a bang-up job banging on the Kung Flu (Season 1!) stupidity, along with Ron Paul (both can be read on the unz.com site - here and here, respectively). Mrs. Malkin's latest writing was on a different subject entirely. 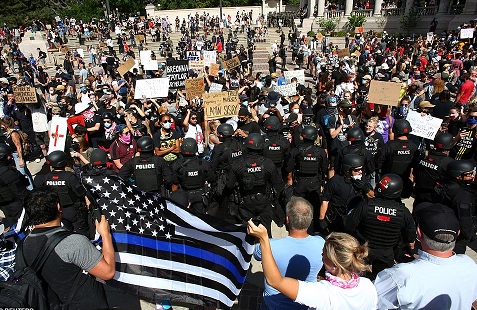 One Nation Under Anarcho-Tyranny was written as a personal account, very personal, in fact, as Mrs. Malkin and her conservative co-horts were in just about in the middle of a street battle with the usual antifa types. In this account of what happened in Denver, Colorado a weekend ago, the writer appropriately brought out the term Anarcho-Tyranny, one of Peak Stupidity's topic keys. We've been discussing this, what's basically policy by government in America now, on and off since the Charlottesville, Virginia street battle 3 summers ago.

It was anarcho-tyranny as usual* in Denver, as the local police, besides one cop, per the account, stood down and not only let the speakers be harassed (one could say it's not their job to break it up), but prevented Michelle Makin's conservative crowd from defending themselves. This is how it's been going. Ironically, and not in the Morrisetteian sense of that word, Miss Malkin's rally was a "Law Enforcement Appreciation Day" rally, meant to show support for the "men in blue".

Of course, it's easy to write in hindsight "what'd you expect was gonna happen?" It is still unexpected that the law would just completely favor one side during a political conflict, at least by people who still assume we are living in a country with law & order and all that. Secondly, this was specifically a rally to show support for law enforcement, as a group, what with all the defund the police efforts going on. You'd really expect the cops to help you if you need help, if you came out to rally on their behalf.

Nope, the difference now is that the orders from on high are for the police to stand down when conservatives are being attacked and only enforce the law, good and hard, on any conservative in the least bit out of line. (Well, defending one's self is not out of line, but they don't want you to do that either.). It is to be perfectly expected, though, that the cops, with a few exceptions, will follow those orders, rather than doing the right thing. Like lots of people, they care about their lifestyle and finances more than they care about doing the right thing. Why hold a rally for these people, next time? They are just the enforcers of Anarcho-Tyranny, just doing their jobs, dontcha' know.

Peak Stupidity has never had a great respect for LEOs**, possibly due to our being a water sign, not at all compatible with Leo's. They are not by any means all bad guys, as I've found out through the multiple interactions involving traffic stops. One nice interaction is related in our post "First Responders!" - The Cops. Michelle Malkin did mention one exception in her column, a guy who did do the right thing when things got violent at her rally. Still, I'm of the opinion that there shouldn't be many times in one's life in which one should call the cops, as it's asking for MORE trouble, most of the time.

We need to all realize that at this late stage of what has just been a Cold Civil War between the ctrl-left/diversity crowd and traditional Americans is going hot . At this late stage, the left has infiltrated ALL the institutions of society. We thought Big Biz was somehow not against us, but that has been proven wrong. Some thought that law enforcement and the judicial system, if not on our side, would at least be impartial. That has been proven wrong.

I haven't included any excerpts this time, so please click on the link above to see how that support-the-cops rally went down, in this era of AnarIt seems like Mrs. Malkin learned a hard lesson in Denver a week and a half ago. The lesson is, as the song said: we're finally on our own.


PS: OK, just one excerpt from the end of Michelle Malkin's article:

[UPDATE: On Wednesday morning, the Denver police union president APOLOGIZED and confirmed that a “retreat order” was in place, effectively abandoning the duty to protect and serve the peaceful, pro-police rally attendees.]

So the message is loud and clear. When push comes to bloody shove in End Stage America, under the rule of the anarcho-tyrants, we, the law-abiding, are the enemy. Those in uniform sworn to protect and serve will turn their backs on us because their bosses don’t answer to the public. They protect and serve the mob.

At least we've all come to an understanding now.


* Here's just another example out of many from Paul Kersey's blog: - - Black Police Chief of Raleigh Sides with Black Insurrectionists, Ceding Monopoly on Violence to the Mob; Says Will Not Put Police in Harm's Way to Protect Private Property (you won't find many short title's on his blog). I happened to have had this a tab open in the browser from a good while ago.

** I HATE HATE HATE that term and only wrote it here for the joke.

Moderator
PS: Mr. Ganderson, I don't know those lyrics at first glance. If that is the band I think it may be, I am so ashamed.

Ahaa, I was going to put in some other lyrics from "Throwing Stones", so this must have rung something in my brain, as I see that's what you've got. I was going to a lyrics web site to find: