I'm sorry to have to put cuss words in post titles now, but this latest news out of the Sierra Club has me boiling. It's making me angry to write this post, and I'll have to break this into 2 posts just to not get carried away.

(Note the lack of Northface colorful rain-proof gear and water-bottles and tools hanging off anodized carabiners. This guy's in too nice a dress suit to even wear to church these days.)


John Muir was out hiking the back country of California in what's now Yosemite National Park a century and a half ago, and then spent time doing the same in the Pacific Northwest and Alaska. He passed up a professorship at Harvard (if that means anything to anyone anymore) to stay in the wilderness he loved. He was the co-founder, along with Univ. of California, Berkeley Professor Henry Senger, of the Sierra Club, a group of hikers and naturalists, 128 years ago.

More importantly, John Muir pushed for the designation of Yosemite as a National Park. Peak Stupidity readers will know that this blogger is as Libertarian as the rest of them, but these beautiful national parks are something I'm very grateful men like John Muir (and Teddy Roosevelt) created. Any backcountry hiker who hasn't heard of the man is just ignorant and ought to go live with the bears for a while like Timothy Treadwell. Here's what John Muir saved for Americans: 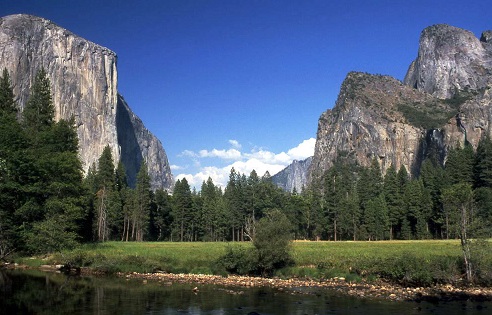 (For this and the follow-up post, all the color pictures are of Yosemite Park.)

The Sierra Club itself was instrumental in the creation of Yellowstone Park in (mostly) NW Wyoming and Glacier and Mt. Rainier Pars in Washington State.* (The latter has a Camp Muir at 10,000 ft. up in which climbers can stay till they start out for the summit of 14 1/2 thousand at about 4 AM.)

OK, I've mentioned the mission creep before in this organization - see Mission Creep by the Sierra Club - 3 1/2 years back. That betrayal of the cause of environmentalism for 30 pieces of silver (OK, more like 4.1 Million pieces at today's spot price) to open borders pusher/donor David Gelbaum was more than mission creep. It was an evil deed, selling out like that, but I guess if all you have is the love of money, it at least makes sense.

This latest stupidity is beyond making sense. I don't think this crap would have happened even in the Chinese Cultural Revolution. Those sick fuckers hated the landlords and "capitalist roaders" and such. If they weren't too messy, and were more blessed in the first place, to ever have kept pristine a place like Yosemite Park, I really think they'd have not sent the owner to a pig farm in Manchuria.

Another thing about this that made this even worse is that I'd first though it was just the SJW set of the Sierra Club that possible was agitating for this cancellation of John Muir. I followed a link to this Sierra Club page and realized this was the damn Executive Director writing, well, read the following:

The Sierra Club is a 128-year-old organization with a complex history, some of which has caused significant and immeasurable harm. As defenders of Black life pull down Confederate monuments across the country, we must also take this moment to reexamine our past and our substantial role in perpetuating white supremacy.

It’s time to take down some of our own monuments, starting with some truth-telling about the Sierra Club’s early history. That will be followed by posts on how we’ve had to evolve on issues of immigration and population control, environmental justice, and Indigenous sovereignty. We will also devote a post to a discussion of how the Sierra Club is working to center the voices of people we have historically ignored, so we can begin repairing some of the harms done.

The most monumental figure in the Sierra Club’s past is John Muir. Beloved by many of our members, his writings taught generations of people to see the sacredness of nature. But Muir maintained friendships with people like Henry Fairfield Osborn, who worked for both the conservation of nature and the conservation of the white race. Head of the New York Zoological Society and the board of trustees of the American Museum of Natural History, Osborn also helped found the American Eugenics Society in the years after Muir’s death.

See, John Muir was friends with the badwhite guy. OMG, he'd have probably LIKED Mr. Osborn on twitter if they were around today! So, the Sierra Club has got to evolve. I'm guessing the means your donation will not beautify the wilderness or allow you better access to it. Your money will be used to tell you what a piece of shit you are for being a white man (or woman now). They need a lot, too, because that's who comes to the meetings and goes out hiking in the wilderness, the white people. It takes a lot of money to tell all of them how much of a piece of shit they each are. So, ante up, Bitchez!

That's some angry facetiousness there, so please don't ante up. I should put this somewhere in every post on Environmental Stupidity, or at the top of every post here:

DON'T DONATE ONE RED CENT TO THE SIERRA CLUB, EVER!!

That's it, I gotta quit now. More on this in a later post.

* The name is just Spanish for mountain range, but I assume it's named after the Sierra Nevada mountain range* in California, in which Yosemite sits, as do Sequoia also and King's Canyon National Parks.

Unbelievably, when I looked on duckduckgo to just check on the naming of the Sierra Club I got pages and pages about the sick shit that is the subject of this post.

** His email address is michael.brune@sierraclub.org. Tell him Peak Stupidity sent you!

Moderator
PS: Mr. Anon, the guy is just condemning his progeny (he has 3 white kids, per the bio.) to live in a land without all the beauty that's it his high-paying job to save. He's worth than worthless.
Mr. Anon
PS Contemporary society doesn't value accomplishment. It doesn't matter what you've done. One wrong word, one questionable association - any pretext at all - and you will be made to disappear. Look what envious hacks did to James Watson.

Michael Brune has accomplished nothing of any note. He a talentless drone, a corporate functionary executing the will of global capitalists. He is a nothing. It's easy for him to cancel a man like John Muir, whose footsteps Brune is unworthy to walk in.
Moderator
PS: Agreed, all. Thank you for the comments.
MBlanc46
PS The Left want to piss on every single piece of American history before they consign it to the flames. And the normie whites just wander about with their heads in the clouds. Eventually many of them will wake up, but by then it will be too late.
Adam Smith
PS: Good morning Mr. Moderator...

Thanks for the horrible news...

So... John Muir, co-founder of the Sierra Club is being canceled because he was friends with Henry Fairfield Osborn who believed in the conservation of the white race...

Evidently belief in the conservation of the white race is a cancelable offense...

A sin against the civic religion...

I looked up some antonyms for conservation... Because the words we use have meaning...

Mr. Muir,who passed away almost 106 years ago, is being canceled by the people who fund and run the organization he co-founded because his friend did not believe in...

I looked up some synonyms for abolition...

The overlords have removed their mask. They no longer feel the need to hide.

It's official state and corporate policy to exterminate the white race.

A time for peace? I fear it might be too late...