From the "You can't make this shit up!" department

Without the one cuss word in there, this was Dave Barry's bit, wasn't it? I confuse him a lot with P.J. O'Rourke, but I believe it was the very humorous Dave Barry of the Miami newspaper. That and "that'd be a great name for a band" were my favorite lines. 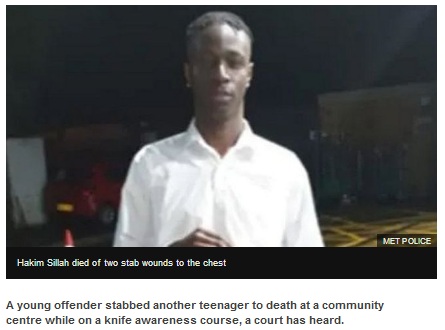 From across the pond, on an island of stupidity, call it the Stupidity Annex, comes this laugh-a-sentence story from the Beeb, which is what the Dweebs there call the BBC (Government British Broadcasting Company). The humor starts in the title - Hakim Sillah death: Teen stabbed at knife awareness course. First, we read:

The 17-year-old boy, who cannot be named*, knifed Hakim Sillah, 18, twice in the chest at the west London centre on 7 November last year, Isleworth Crown Court was told.

Prosecutors said there was "a cruel irony" that Mr Sillah was stabbed while attending a weapons awareness course.

Yes, isn't that ironic, like ray-ay-ain on your wedding day ... but bloodier? I can't skip a single paragraph, as the irony just keeps on ...

The teenager denies murdering him.

He also denies two counts of wounding with intent and one count of unlawful wounding.

He stabbed him in the chest with a knife multiple times and the guy died, but still, he denies murdering him (maybe the other "gentleman" dies of the COVID-one-niner - "Chalk up another one, Liam!") You just can't get a good Barrister these days.

Sorry, this is not a fisking here. This post simply contains people-of-color commentary.

Michelle Nelson QC, prosecuting, said all participants at Hillingdon Civic Centre had been risk assessed before the session, which was run by the Youth Offending Teams (YOTS), and "those classified as high risk were precluded from attending".

"Both the young men must have been risk assessed, but the sad reality is that both attended that course carrying knives," she said.

Yeah, we're all assessed in here, I'm assessed, he's assessed, my grandmama's assessed. None of us would think of bringing our knives, but, well, this one guy may not have been perfectly assessed, so I'm gonna bring just the one knife in case he starts anything.

Then comes a few words about the DNA evidence and the "Rambo Knife" found in the woods near the defendant's home.

"He says he did not intend to kill or to cause really serious harm and told the police in his caution interview that he had acted in lawful self-defence. [He] had intended to stab Hakim Sillah in the arm, but he moved.

"The prosecution say the defendant took a deliberate decision to stab the deceased to the chest twice, we say, lawful self-defence does not arise."

I don't know how much guys like these two knife awareness students had kept up with Western culture, what with being in England and all, after all. You'd think they might have watched a little Indiana Jones at some point in their lives. Never bring a knife to a knife awareness class when you could have brought a gun.

Peak Stupidity included this scene before in one of our other 2 posts about stabbings in formerly-Great formerly Britain, Knife, immigration policy Clash on the streets of London. The other post was an earlier one, Knife control in London - some well-forecast stupidity.

It's one thing to have to deal with this violence from black thugs in America. They've been here a while. It's the utmost in stupidity to import them in large quantities after you already (should) know better! "Madness!", as the man said.

* I dig, I dig. Some of those names are hard enough to pronounce, but spelling them correctly is not worth the trouble. I don't blame The Beeb for not even trying.

Moderator
PS: Mr. Blanc, but why, do you think? Is there something to the theory that Western Euro countries lost the best of the men in the war, who didn't pass on their genes?
Moderator
PS: LOL on the 2nd image, Adam. They wanted me to show an ID to buy cigarette lighters a few years ago at the grocery store, I just remembered. I think I said "here, take 'em".

Get a black woman cashier. They don't honestly give a damn about nuthin'.
Moderator
PS: Yeah, haha, Federalist, that would make sense, but bureaucracy is some strange stuff. I guess searching for knives (guns, too, probably) was not part of the assessment, per the Code of Regulations. Don't go off the script, man.
Moderator
PS: Bill H., so that I don't get jaded on them, I like to see certain movies every 3 or 5 years. "Patton", "Bridge on the River Kwai", "Ferris Buehler's Day Off" ... I could name 50 if I gave it some thought.

If the capitol of Stupidity Island had some knife control laws, then obviously this sort of thing would never happen.

☮
MBlanc46
PS I don’t follow British news as closely as I used to, but it appears to me that Britain is lost. Their Conservative Party is almost as pozzed as our Leftist party. It was a great little country, while it lasted.
Federalist
PS-
Instead of "assessing" the scholars attending this course, maybe they should have actually checked to see if they were carrying knives (or any other weapons).
Bill H
PS May have been a poor try, but you did include my favorite scene from that movie. My wife forces me to watch Indiana Jones every six months or so, and I always hope it's the one with that scene so I can enjoy at least one minute of it.
Moderator
PS: Robert, I didn't try very hard on this post. There could have been so many more jokes, dammit!
Robert
PS: A knife awareness course, huh? I bet the ladies who ran this thing thought talking could raise awareness. Little Al-Rashid, or whatever his name was, knew better.