It's been a whopping 4 days since we at Peak Stupidity got upset enough about the Kung Flu (Season 2!) stupidity to write a Scenes from the Kung Flu Summer re-Panic post. Here we go...


Somebody PLEASE think of the children! 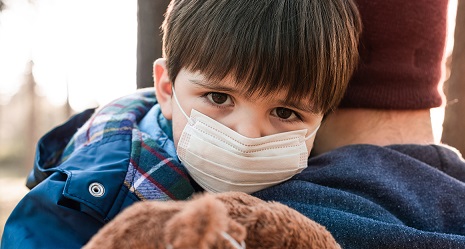 It really is sad, what you see in that picture. You don't have to be a out-of-control full-of-compassion women voter to feel bad for the kids. What kind of life is this for them? It's been 20 years since the helicopter parenting has been big, meaning kids just don't run outside to play with friends and get told to come back for dinner*. They've had to have their parents arrange "play-dates".

That's bad enough, but over the last 4 months, they've had to get their parents to lend them their phones or computers just to talk with friends or see them on zoom. That's no way to interact, just on a screen, not for months at a time! (We've been lucky enough to deal with some other parents that don't mind the kids all being out together ... no masks, no muss.)

Can you imagine what the little ones are thinking, though? If you are a 2 y/o toddler, you may have solid memories only going back 1/2 a year or so. You will think this is the way the world has always been. Adults don't show their noses and mouths in public, in the same way that they don't show their pee-pee's and ass-cracks... OK, well, some of them. If this goes on for, well what will it be, another year, two(?), what kind of impression of the world will this be?

The kid on the right below might have an obsession with not showing his face when he grows up. He may have the same dreams about leaving his face mask at home, you know, like those dreams where you go to the office and realize you forgot to put your pants and underwear on. (Usually it's just the pants, unless it's one of THOSE dreams... with Ivanka working in the same cube as me ... Jared is my reporting manager with his web cam... we've all probably had this one ...) 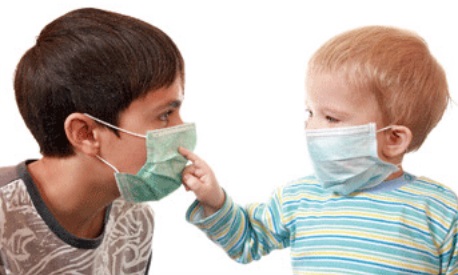 We went to an outside deck at the restaurant/bar nearby, so I could do a little training with a friend in a field we both work in. I and my boy went up the wooden stairs straight up to the deck, outside the whole time. "Oh, you have to wear a mask", the waiter said. "What? We're outside, and look, they don't have any masks on." "They" were 6 20-something people having a good time about 8 ft. away. "No, you don't need a mask here, but you have to come in through the inside, with a mask on." WTF?!

OK, I know part of this is about being carded, something they all feel obligated (more like, pressured by THE LAW) to do to anyone, no matter how old or young**. They want you to come through the door that would have the bouncer, were it not daytime in the COVID-19 era. "Yeah, well, we're already out here, so ..." I should have added "and I don't want to take a chance on my boy picking up the Kung Flu walking through the crowd", but I'm just not that quick on my feet. The guy let us just sit down.

Next, where's the friend? He thinks the same way as I do on this whole business (and really a whole lot of my co-workers do too, from my informal surveys). I was looking forward to some fun when he showed up! It turned out he was parked, down below the deck, ready to also go up the wooden stairs. "Hey, Joe, here's a mask! Put it on!" I yelled from up top, as I pulled out a balled-up face mask from my pocket and threw it down toward his car. It ended up on the asphalt, and, then the waiter told him to head around the front. He didn't want too much trouble so he came through the inside unscathed. What a country!


Then, there are these freaking guys! 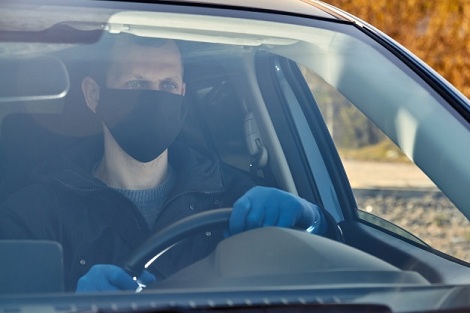 * There are lots of reasons for this that may or may not have been discussed in a previous post, but would be good for another.

** See "You need to know how to pick your battles."

Rather than "six," scientists and medical researchers have actually identified hundreds of different unique coronaviruses. They collectively form a part of the cold- and flu-like symptoms people get several times a year, usually mild. Studies have shown that those who come down with "flu" about 10-15% of the time is the most likely agent to blame.

(Those who say they never get sick of course do get viruses, but their immune system is strong enough to suppress them before any kind of noticeable symptoms.)

No one discussed this kind of medical minutiae in the past, and so most passive media-consumers just assumed The Coronavirus was something brand new to the human race, something we've "NEVER SEEN BEFORE!" But they were wrong.
Mr. Anon
PS The Corona-Freakout has certain brought into bold relief just how utterly stupid and useless the media is. Take this article, from the Telegraph, picked up by Yahoo News, and linked on Drudge:

If you read the article, it says nothing of the kind. The researchers in question did not identify six different kinds of coronavirus. They simply clustered the symptoms into six groups of increasing severity.
Hail
PS

"That's no way to interact, just on a screen, not for months at a time!"

For some, it is the way to interact, for as long as possible. But it's certainly unhealthy for the majority -- and also for most of those who prefer to interact that way.

Part of the Corona-Panic all along has been the radical empowerment of a particular personality type. They dictate how the rest of us live. Even that wouldn't be so bad, but there is no 'stop' mechanism when you start down a path like this, and it spiralled out of control.
Adam Smith
PS. This picture reminds me of a time when America was sane...

If we persevere, together, we can win the War on Sanity!

☮
Moderator
PS: Mr. Anon, re 2nd comment, with "In 20 years we've gone from the War on Terror, through the War on an Element (Carbon) to the War on Death. I wonder what the next War will be waged against - Rain? Mondays? Ants?"

I've said the very same regarding the first two. I put it as a War on a Feeling, a War on an Element, and now a War on the Inevitable. How can you make a proper Declaration of War against these things?

The next war, rather than being Charlie Wilson's War, will be Karen Carpenter's War, cause, hell yeah, rainy days and Mondays always bring me down, so let's bomb the fuck out of them. 'Murica!!
Moderator
PS: Mr. Anon, regarding your 1st comment here, I've seen many ages of people wearing them in cars - not a big ratio of total drivers by any means, and I can't remember any 20 y/o's wearing them, though.

That's funny stuff about the OCD people. They should think of it as cultural appropriation or, I guess, "nut-case appropriation". "Hey, take those things off.! You're just out here making fun of us!"
Moderator
PS: Mr. Ganderson, tell your son that was a good one for me. As for your entry back into Mass, I think it should be the opposite. The rest of the country should have been quarantining any travelers out of Mass, even well before the Kung Flu, mostly just to weed out the massholes and send them back... like most of them?

(OK, I should pick only on the Boston area. People there may New York City people look downright friendly!)
Moderator
PS:Mr. Blanc, yeah, even I forgot that bit, that all the measures were just to "flatten the curve" back in March, till some commenter on unz reminded me.

PPPM, I could imagine us being in a Sci-Fi book, with aliens from another planet having taken over CNN and parts of the internet, just playing jokes with each other. "I bet you I can have 1/2 the humans wearing diapers over their faces in 4 months!" "I'll take that bet for 2 million Cling-ons."

It's like the (likely Australians) making T-shirts with English writing to sell cheap to Chinese people, as related in "Little joke in Big China... I think it was the Strayins!" - -

https://www.peakstupidity.com/index.php?post=470
Mr. Anon
PS "They seem to have shifted, without saying so, from “flattening the curve” to “We (unlike that evil monster, Trump) are going to prevent people from dying”."

In 20 years we've gone from the War on Terror, through the War on an Element (Carbon) to the War on Death. I wonder what the next War will be waged against - Rain? Mondays? Ants?
Mr. Anon
PS Then, there are these freaking guys!

Are there really younger people who do that? I've seen some gray-hairs wearing a mask in their own car with the windows rolled up. That's ridiculous enough. But to see anyone south of 60 doing that would be full-on dancing-bear ridiculous.

I think people with OCD who don't buy into all of this should really be pissed off. Imagine all the sideways glances they've gotten throughout the years at their excessive hand-washing or other odd behaviors. Those people ought to go complete Travis Bickle on the covid-commandos: What are you looking at?! You f**kers are a hundred times crazier than I've ever been!
Robert
PS: Mr. Ganderson, That is a very good line.

P.S. I once told a lady friend, 'Neither do I wear a rain-coat when I take a shower.' That relationship got nowhere.
Robert
PS: Mr. Mask, Did the "peace officer" actually do anything? I read about this kind of stuff, but I find it very hard to believe. Perhaps I am just in denial.

It seems like the supposed "coin shortage". Can that be real? Do coins just evaporate or go stale?
Ganderson
PS My son yelled at a guy driving with a mask on “ hey buddy- you wear a condom when you jack off?

I see no sign of the panic subsiding. Back to MA tomorrow, not planning on quarantining for 14 days.
Pretty Pink Panty Mask
PS This suiciety is full mongoloid now.
Went out for a walk after lunch with a skulls t-shirt on and some Karen flagged down a cop.
Our external enemies are having a huge belly laugh and thinking...this is going to be so easy thanks to a fifth column of Marx ballwashers stuck in the 19th century.
After Emmanuel Trumpstein wore the obedience muzzle (mask) to the military hospital I thought that the enemedia would come out against them.
Pick up my monthly RX at the busiest hospital in the state located in Capital City and it is so quiet there that you could hear a mouse fart.
It has been that way for the past several months.
MBlanc46
PS They seem to have shifted, without saying so, from “flattening the curve” to “We (unlike that evil monster, Trump) are going to prevent people from dying”. The problem, from their point of view, is that they’re not going to be able to prevent people from dying (short of completely shutting down social life, in which case we all die of starvation within a couple of months). They’ve built up expectations that they can’t satisfy. I’m not sure how much good that does us, but it is a problem for them.