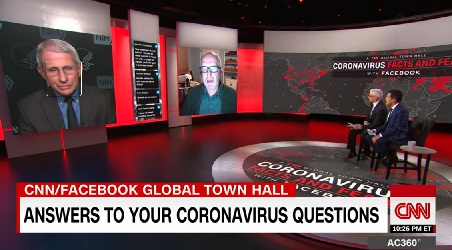 It was supposed to be time for my next Morning Constitutional today, as I'd written on Saturday, but this latest piece of stupidity just threw me off my schedule. I've never been as pissed off about the Kung Flu panic-fest, even the first season, as I got from listening to just a 15 second snippet of the Infotainment this morning.

I'd thought that the amount of CNN penetration (yes, it's a kind of penetration) in the airport terminals had been decreased greatly over the last few years, due to both the fact that people are too busy on their phones to watch, and that many of the screens hanging down are used for displaying lists stand-by or 1st-class seating. Well, it's baaaackk! Perhaps due to the COVID, with still fewer people in the terminals (though increasing quickly), making it quieter, and different methods of seating people, CNN is around and penetrating their captive audience from behind. See, I moved far away from the screen to sit looking the other way for a few minutes, but the speakers are spread out to keep the sound loud enough to be difficult to get away from.

It was something like this: "Mr. Whomever, we have these new policies in place, but how many lives could have been saved if we'd done blah, blah, blah?" She brought up the over 135,000 number, of the people who are said to have died FROM(?) the COVID-19 over, what 4 months now. (Keep in mind that 700,000 or so Americans die in 4 months normally, and perhaps many of these people are dying a half-year earlier.) Mr. Whomever hemmed and hawed, and the the lady repeated this, like she was just outraged.

I'm sure the TV lady was outraged. With a lack of perspective* that might lead one to ponder "well, lots of people die of all sorts of things, and we donate to the Heart Association, we support medical science, there are safety people of all sorts in all industries working to prevent needless deaths, and we never talked about needless deaths during other flu seasons", sure, one might be outraged. Do talking heads go on and debate or berate the "black community" for continuing to serve and eat the most heart-unhealthy foods in the country? How many needless deaths have there been? Do talking heads freak out about the slow progress in cancer treatments or how many people visit tanning beds? How about diatribes and big loud discussions about diabetes, or high blood pressure? More people still die from these causes than the Kung Flu, here in the middle of this "pandemic".

The line between stupidity and evil is not always easy to determine. I lean very much toward the side of stupidity when it comes to the journalism "profession", though, from experience. These people are very, very stupid. This outrage was likely real, due to the woman's complete lack of perspective and the constant hype she's been receiving from her whole Infotainment world that she lives in.

It's very unfortunate that many Americans subject themselves to this idiocy from the Government Media Department. The reason I got so outraged myself today, is that I've really never heard any of this stuff off of the TV, as I simply haven't watched for 20 years. I tried to stay away from it, but it got me today, if only for those 15 seconds. It took that much time to realize what bullshit I was hearing and get out of range. 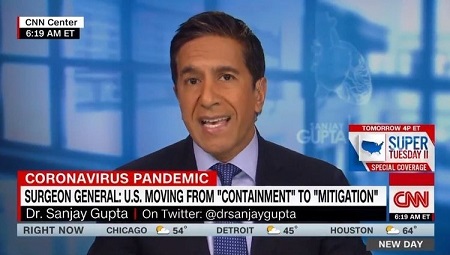 When I got to a part of my job that requires the wearing of a mask since this re-Panic, I refused to wear it. I'd just had it, and I'm just glad nobody confronted me about it. Keep yourself away from the TV as much as possible, readers, it's a non-silent killer ... of intelligence.

Mr. Anon
PS "CNN is around and penetrating their captive audience from behind."

And they probably don't even have the God-d**ned common courtesy to give them a reach around!

Ann Coulter has predicted the Corona-Panic will miraculously shift and the good news will prevail in the media after November 3 (Biden's victory day), with one piece of good news after another proclaimed daily for a few weeks. The shift will be traceable to the exact day after Biden wins the election.

It's true they can't/won't have Rachel Maddow go on the air with a special report, "Sorry, everybody, Corona was a hoax. It was a necessary one to defeat Fascism, and now that we have, it's best t tell you all directly: It was never true. We lied. Sorry. We hope you understand. Now, we move forward with full-reopening! No looking back. Thanks for your understanding!"

It won't happen like that but will happen just as the Panic itself coalesced in February and March: A narrative set, enforced, relentlessly drumbeat by the media, and beamed into everyone's devices. Effectively, the always-on devices are like mind-control devices in this way, and can force through artificial realities. Opposing voices will be silences, and the most agitated pro-Panic individuals will be disempowered after months of seemingly being in the driver's seat.

We can also expect negative coverage through September, October, and up through voting day itself (Nov. 3). I've already seen stories prepping this narrative: "Fall 2020 expected to be among worst flu seasons ever known in US history!"

"The enemy of the people." So many people realize it, but no one seems to know (or imagine) any way out of it.
MBlanc46
PS It seems to me that there are there are several factors spurring the Kung Flu Panic. First, it gives people the experience of their lives not being the same old boring routine. There’s even a whiff of real danger in the air. So far as the corporate media go, it’s a never-ending story. No scratching of the head in order to figure out how to fill the column inches or minutes today. No pondering of what to make the headline is required. And, of course, it can be used to tar the Bad Orange Man. For the Dems, it appears that it’s going to be an election winner. The problem for all of the above is that destroying the economy will, well, destroy the economy. Ordinary folks will find that although their jobs were soul-destroying, they did put a roof over their heads and food on their tables. “Journalists” will discover the same thing. When folks are forced to drop their subscriptions to the drivel, the drivel writers wind up on the streets. And for the Dems, once they’re back in office, the last thing that they want is a destroyed economy. Therefore, one way or another, the Dems will have to figure out how to end the Panic without to explicitly denying everything that they’ve said for eight months.
Moderator
PS: I deferred to your familiarity with the numbers and your estimates (as I've read on your site), before, Mr. Hail, and will continue to do so. That 50/50 FROM/WITH split is reasonable, but someone working in particular functions in a hospital could probably give another common-sense verification of that. (How many deaths are "well, we don't know, but, you know, they want us to mark them as COVID-19, if it's at all possible, for the public safety and all that. Can't be too careful!" Can't be too truthful either.

As for the mainstream journalists, perhaps a guy like John Stossel could do a good job on getting into this, but I think most of them are just plain stupid and hysterical. It helps that they have such a huge audience right now. There people are like TV/movie stars in that sense. They enjoy this and don't want it to end. Maybe after Season 2, we'll get another season of thug/Commie rioting. It's been a while, and I need my Bread & Circuses!
Moderator
PS: No, Robert, it is not wrong. It's a matter of taste. If you'd rather look at pictures of Oriental girls masked up on all orifices versus pictures of the esteemed Drs. Fauci and Gupta, well, knock yourself out. There's no accounting for taste.

Yes, she was hot. Gotta bring the numbers up, as Dr. Fauci says. Don't flatten the curves!
Hail
PS
On another note, I find is funny, if that's the word, that your employer is still sending you all around on airplanes so often. Didn't they get the Panic memo?
Hail
PS
"She brought up the over 135,000 number, of the people who are said to have died FROM(?) the COVID-19 over, what 4 months now. (Keep in mind that 700,000 or so Americans die in 4 months normally, and perhaps many of these people are dying a half-year earlier.)"

This may not be accurate because of the distortions introduced into the system by the unprecedented social experiment of a lockdown and a media-led Panic drumbeat.

The lockdown effect had different impacts in different places. On one hand, fewer accident deaths. On another hand, more suicides and medically preventable non-corona deaths by those too scared to visit a hospital during the Peak Panic period (documented in New York City). It's hard to guess what the total impact is, but one thing that's clear is the number of excess deaths was never close to outside the general severe flu range, the same as the impact of Wuhan-Corona in every other country.

Still, yearly excess deaths at only 65,000 covering the entire time the All-Cause Deaths curve was above the baseline is another knockout win for the anti-Panic side.

What I find puzzling is how no media outlet, that I know of, is consistently probing and attacking. These are really just easy wins (the data is all there, not hidden), but they're left to independent dissidents to observe and comment on in the wilderness. This includes some major journalists.
Robert
PS: Is it wrong for me to say that I liked the pictures of Part four better?
Moderator
PS: Yeah, I don't know how they got the high ratings the first season, Adam. When I filled out the Nielson diary, I only put down 2 segments of 5 minutes watching the weather radar during the week (and even that was made up, just so's they wouldn't think I was making it up)!

I didn't anticipate the release of panicfest season two until at least September. I hope it's better than season one.