When the Swastiker hits your eye, on a big pizza pie... 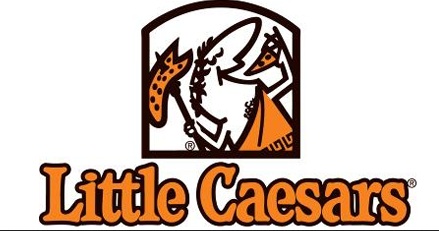 I've heard of hate hoaxes, and I've seen Mystic Pizza*, but I've never heard of a Hate Pizza before. I am a pizza lover, not a hater, especially that thin-slice NY style. Apparently, pizza pies can be used for nefarious purposes too, as related in this WFTV (Orlando, Florida) article. The story took place at the abode of the Laska family in Brook Park, Ohio, a suburb of Cleveland.

I don't know whether to believe this one or not, as there are very clever ways to score free pizza, and new ones are not out of the question. The Laska family said that their pepperoni pizza had the pepperoni arranged in a Nazi Swastika pattern. They have the pictures to prove it: 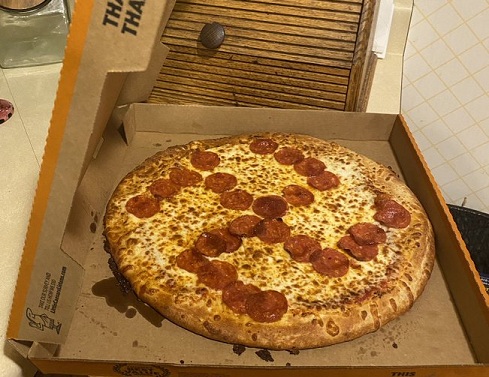 Entirely unprofessional, the whole thing! If you're gonna make this crooked cross, do it correctly. Clockwise, dammit!

Peak Stupidity, I will remind the reader, is somewhat acquainted with the pizza business from a customer service perspective, as related in Consumer Care Productions presents: "A Fistful of Pennies". From this experience, I personally question how the local franchise got away with using enough pepperoni slices to make this symbol. They are usually real tight about it. Sure, they'll load you up with green peppers and onions, but who wants vegetables on a pizza? I hate to invoke Godwin's Law this early in the post, but, if you will recall, Adolph Hitler liked vegetables. I mean, sure, down in the bunker in May of '45, he with Eva Braun he may have splurged a bit and eaten something, perhaps anchovies, or something with a similar smell ... but I digress. If it's got meat on it, is it really a Nazi pizza, then? Mixed messages, people!

Let's hear it from the Laska family over in Brook Park:

The Laskas didn’t eat the pizza and instead tried calling the Little Caesars location that made it, according to WDAF-TV. Initially they were unable to get a hold of anyone because the store had just closed. On Sunday the store owner called the Laskas back to say that it was an internal joke and the pizza was not intended for customers. He also said the employees involved were fired.

“Told him that it was supposed to be an internal joke that they were playing on each other and the other employee, and the pizza was never intended to go out. He also confirmed that he had let the employees go that morning,” Jason Laska told WDAF-TV.

Let them go where, to the Neo-Nazi rally at FirstEnergy Stadium? See, now there's a decent boss, letting his employees take their personal time, and to Little Caesar's HR department: Kudos! You have created truly an employee-friendly work environment.

“We’re trying to solve hate, and even if this was just a joke internally for the employees, just stop. Stop with the symbolism, and let it go away,” Jason Laska told WOIO-TV.

C'mon, it's about the anchovies, isn't it? I agree about the HATE too. I freakin' HATE anchovies, and I HATE HATE HATE it when they make a mistake at the franchise store, take the anchovies off, but you can STILL TASTE THEM in the cheese! We do need to solve this HATEFUL topping confusion problem. And if you're gonna be HATEFUL anyway, draw the Swastickers clockwise, dammit! Read some freakin' books! (Hey, I know where to get one - at the NeoNazi rally at FirstEnergy Stadium, outside in the parking lot, you know, right where you buy your windowpane before the Dead shows.)

The employees involved were fired, according to The Associated Press.

Oh, that kind of "let go". Now, I'm sorry that nobody can take a joke anymore. However, this hit to its reputation couldn't have happened to a better pizza chain, for me. I have a real ground beef against Little Caesar's, and this goes back over 25 years.

My roommate found a coupon for a deal for 2 small pizza for the price of 1 at Little Caesar's. It was for some kind of 4-topping combination. OK, well, I didn't want the vegetables, so, right when we ordered, I asked "can you leave out the onions and peppers on one" ("and any other of that Nazi shit") No, just the first part was what I asked. "Nope, that's the deal." "Oh, they're already pre-made for this deal then, OK." My roommate already had his heart set on this pizza, so I was locked in. "No, they're not pre-made, but we can't do that." "Well, just don't put the peppers and onions on one of them." "No." Bureaucratic bullcrap at Little Caesar's! I mean, I could see the guy making them right there. Nope, that's highly irregular. I haven't been back. Ever. Damn Nazi shit!

I had a friend who told me of his pizza delivery days way back in the past. On this one run, he drove like a maniac. (Actually, he was a very good driver and normally drove like that.) Well, from all the tight cornering and such, the formerly circular pizza was all mashed into a ball at one end of the box. The customer looked so sad, he told me, that he gave it to him for free and ate the loss.

Well, between that story, my "customer care" story linked-to above, regarding heaving change across the lobby, and then the one time I ended up kicking out the customer's dorm-room door to deliver one**, I write this open letter OK, paragraph to the Laska family:

Be glad the pie came on time, in one piece, and with lots of pepperoni. Be glad that the deliveryman didn't come to rob you.

Are you trying to get a free pie? There are other ways that don't result in more BLM protests and looting. Where exactly is that pizza pie that you took the picture of, anyway?

Lastly, to the whole damn country: Do you people have a sense of humor anymore?

When a sneeze goes on by,
and it lands on some guy
That's corone.

To Europe you can't fly
'cause people all just die.
That's corone


* I kinda liked this one, though it's possibly in the Chick Flick genre. From 1988, it featured a young Julia Roberts.

** It was not intentional. The guy didn't answer the knock the first time. I went to get to a phone (before mobile phones), and called him, and he told me to come on up. "Will you answer the door this time?" I went back, and he still didn't answer, so, frustrated at this turn of events, I just kicked at the door. It flew open, so I delivered the pizza to the stoner, got my money, and left with "hey, and you're gonna have to do something about that door."

Dtbb
PS:Happy 4th all! Imagine a year from now. Are we approaching Peak Stupidity yet?
MBlanc46
PS ganderson: We might have been almost neighbors at some point. I grew up in Downers Grove.
Ganderson
PS Glen Ellyn. Auto correct, grrrr...
Ganderson
PS. Mr. Blanc- eons ago I lived in Glen Ellen, right off Roosevelt Road! Happy 4th
MBlanc46
PS DuPage County is where I’m from. It was the home of my ancestors for a couple of generations, although they’re all gone now. I’m in Cook County now, but only a mile or so from County Line Road. If you ever find yourself in the area, ring me up (or the Internet equivalent) and I’ll take you to Al’s for some of the best Chicago bar style pizza you’ve ever had.
Moderator
PS: Happy Independence Day to you all! Hey Mr. Blanc, a good friend used to live in Chicago, but not anymore, so I'm not sure when I'll next get up there (I know, DuPage County). Beer and pizza always hit the spot.

We can all as American agree to get along and smooth over our feelings regarding pizza toppings. That's about all we'll be likely to reconcile though.

Proto-US Blues - I will give it a listen.
Adam Smith
PS: Good morning Mr. Moderator...

Thank you for reporting this very super important hate crime™. As they say, sunlight and bleach and fire are the best disinfectants. We will never solve hate if we continue to let seemingly little jokes like these go unpunished. A left handed swastiker on a little caesars... Oy vey! If there is an old man creator/god in the sky these dyslexic anti-semites will remain forever unemployable forever.

I have a confession... I like vegetables on my pizza. Things like peppers, onions, green olives, you know, some real nazi stuff. I always order swastikers on my pizza, just like Hitler did. I fear these merry pranksters may have ruined a good thing for the people of German heritage.

I just hope that after the dust from this terrible crime settles that I can still get my vegetables arranged in little proper right handed swastikers when I order my pizza.

Thanks again Mr. Moderator.
I hope you have a great weekend.

☮
MBlanc46
PS I recommend the Al’s vegetarian special (the Al’s special without the sausage) at Al’s Pizza in Warrenville, Illinois. It’s thin crust, but Chicago style, crisp not floppy. And party cut, not wedges. It shares a building with the Town Tap, so you can have beer with your pizza. Al’s long since departed the world (the place opened in 1959), and alas his daughter Lynn, who took over the business, died young, but her children now run the place. They’ve tarted the place up a bit since I started going there in the early 1970s—the barbershop that used to be in front of the restaurant is gone and they’ve turned it into a dining room—but it’s pretty much as it’s always been, especially the most important bit, the pizza.
Ganderson
PS. Happy Fourth, fellow Stupids!

Here’s some cool stuff to listen to- first from the Summer of ‘71, and the second a proto-US Blues