C'mon guys, it's all CASES nowadays!

It's so simple. Maybe you need a refresher course! 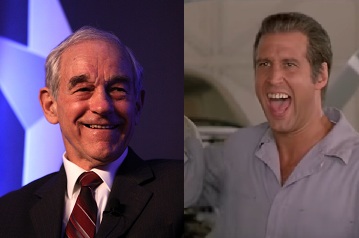 Well, the results of America's unintended(?) experiment of Social Distancing waiving are in. Since Peak Stupidity first discussed the original Minneapolis riots in Snow Town is now Bro Town one month ago, meaning they started likely a week before that, the incubation period of the Kung Flu is up. That goes for about 2 weeks worth of intense, close-quarters, tireless rioting, since I am told it takes a couple of weeks for symptoms from this virus to "present", as the Docs say. 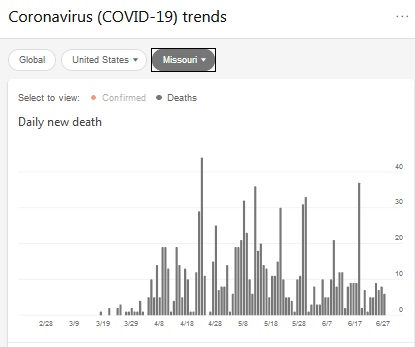 See, the thing is, there is just plain no rebound in deaths, neither FROM, nor even WITH the COVID-19. Oh, Missouri had a bad day on June 18th with 37 of 'em, keeping in mind that, as we mentioned in Back to COVID Klampdown?, 170 people die on an average day in Missouri, just for perspective. Even that terrible June 18th, likely just a date when the coroner had some free time, there was no need for a commandeered Fed-Ex van with a P/A system calling "Bring out your dead."

What would one really expect for the death rates after a month of hard-core mayhem, with no concern for health, out of these black thugs and antifa Commies? You won't find too many older people in that crowd. Older people are generally too weak to be thugs and too wise to be Commies. There was no nursing-home battalion among the bands of rioters. Therefore, one would not expect many deaths from COVID due to the waiver these people were handed.

Dr. Ron Paul, shown above, being admonished by Fletch that's it's all ball bearings "cases" nowadays, has a great column just out, The Media Is Lying About the ‘Second Wave’. As a matter of fact, it is this Peak Stupidity blogger who may as well have lectured Dr. Paul, as this column of his says much of what we've been writing here:

In fact, there has been much reporting that the “spike” in Texas cases is not due to a resurgence of the virus but to hospital practices of Covid-testing every patient coming in for any procedure at all. If it’s a positive, well that counts as a “Covid hospitalization.” Why would hospitals be so dishonest in their diagnoses? Billions of appropriated Federal dollars are being funneled to facilities based on the number of “Covid cases” they can produce. As I’ve always said, if you subsidize something you get more of it. And that’s why we are getting more Covid cases.

Yup. Even outside the hospital, there are more and more positive results. Don't underestimate the power of free chicken dinners. Here's what I have noted, and Dr. Paul, an actual Doctor from Texas, notes:

Even though we know hospitals have falsely attributed countless deaths to “Covid-19” that were deaths WITH instead of FROM the virus, we are seeing actual deaths steadily declining over the past month and a half. Declining deaths are not a great way to push the “second wave” propaganda, so the media and politicians have moved the goal posts and decided that only “cases” are important. It’s another big lie.

"Deaths? C'mon guys, this Kung Flu resurgence is so simple. Maybe you need a refresher course. It's all CASES nowadays!"

What a great American Ron Paul is! I don't flatter myself that the man reads Peak Stupidity, as he's smart enough to have figured this all out, and he's too busy making homeschooling curricula, producing his Liberty Report, and who knows what else.

I shook his hand in 2012. I told him that if he wanted to win the REDACTED primary, he needed to talk about illegal immigration. I'm guessing he thinks about and virtually beats himself up about it daily ... ;-} Still, what if ... ??

These initial results of the experiment in waiving any airborne contagion protection from the Kung Flu, pretty much all that's left since surface contamination was recently re-pooh-poohed by the experts, may be disappointing to many who want to continue with their new Police State powers. That's why you don't hear about it from the Lyin' Press, only here on Peak Stupidity, from Ron Paul, and from the erudite and data-conscious Mr. E.F. Hail - with his newest, column XV, just out). I gotta say though, I am not altogether on the non-disappointed side here either. Were this disease to have killed off a goodly number of these rioters with their Social Distancing waivers, I'd be thinking this plan was maybe not instigated at all, at least not by human beings.

Moderator
PS: Dtbb, I didn't know "Fletch" was in book form first. When I look back at it "Fletch" and the sequel(s) were some pretty funny UN-PC stuff. Movies were still good generally till sometime in the late 1980s to early 1990s.
Moderator
PS: OK, thanks for the reply on that, Mr. Hail. We have an article (when I say "we" that means "me") on here about a comparison between Campaign Trump (not President Trump, the way this has worked out) and Ross Perot.

Ross Perot was a proto-Trump, but a lot smarter and much more capable, IMO. It's really a shame that Mr. Perot had whatever problems were actually beset on him (will we ever know?) during his campaign in the summer of 1992.

BTW, I just wondered whether you liked Dr. Paul other than wrt his anti-panic stance from the way your wrote about it. I just assume Libertarians would be anti-at least the government side of this panic, which is pretty the problem.
Hail
PS
re: Moderator

Both campaigns have a place of great importance in US political history of the past 15 years, more than I think is generally recognized or is likely to be recognized by the "court historians."

Some have said Trump appropriated much of Ron Paul's agenda. When Trump came out demagoguing in summer 2015, much of it was Ron Paul points delivered by a "troll" and a reality-TV star. The difference, I think it's fair to say now after five years of MAGA-Trump and then President-Trump, is that while Trump may have kinda-sorta-believed a lot of it, he was not and is not morally serious or committed to principle on almost anything. Ron Paul was/is. And that is exactly why I think RP attracted a major, rather young following, seemingly out of nowhere.
Hail
PS

No one knows the threshold of herd immunity for any given virus at ant given time in any given place. The same virus in the same place could theoretically have a significantly different threshold if it peaks in March/April vs. January/February, for example.

But it's best to think of Herd Immunity as a dynamic process and not a finish-line which the virus is dashing for. There are real indications that the herd immunity mechanism was already triggered in some places in Europe and the USA by March, others in the following weeks.

All that said, one study on Sweden finds herd immunity for Sweden to be possibly as low as 20%.

Theoretically this means that once 2 million have gotten the virus, although there will be new infections thereafter, the numbers will steadily plummet under zero.

With 5,300 deaths reported (some of them who were dying anyway) and with the Deaths curve now tailing off and assuming a 2 million+ total infections, this puts the fatality rate for Sweden at 0.15%-0.25% (depending on what share of deaths are to people who were dying anyway and how you choose to measure that). But it's going to be more like 0.1%-0.15% for Sweden outside of Stockholm; the effect of the Stockholm nursing home deaths bumps up Sweden's overall rate.

This is exactly the kind of finding that lead the Stanford team under Dr. Ioannidis in April to announce that the Wuhan-Coronavirus had a fatality rate "in the ballpark of seasonal influenza."
Dtbb
PS:The Fletch books are very funny, made me laugh out loud in parts. Very rarely happens.
Moderator
PS: Thanks for the good comment, H.W. Bill Gates has a save the world complex. We're gonna get his world-saving projects good and hard, just like most Americans (maybe not you) put up with his Windows project good and hard.

On the nursing homes/homeless shelters, I agree with your point, but I'd even take out the "we", as a Libertarian. The Nursing Home operators (who make a shit-ton of money, BTW) and the "non-profit" groups that run homeless shelters ought to have been the ones getting damn serious about this virus, just as with any serious flu, as soon as it was known that this was affecting old people the most.

Per Mr. Hail (you should go to his blog, as linked to - Part XV - in this post, Sweden has also had a large number of deaths in nursing home, mostly just in Stockholm due to the type of staff there.
Moderator
PS: Mr. Hail, I may have read only 1 or 2 posts of yours on your Hail-to-You blog before you started documenting (very well, I might add) this Corona panic. Therefore, I don't know where you stand on other issues politically (this one is politically very odd, as you say), but I've always been a supporter of real Libertarians like Ron Paul.

One should not be at all surprised by this, but then there was a little discussion in the thread under the post named "Police State / COVID-one-niner stupidity confluence" about whether the Libertarians have been speaking up about this virus panic. From my quick check on LewRockwell.com, they sure have. I don't even bother with the "Reason"-magazine open-borders idiots anymore.
Heidi's walker
PS Funny https://www.youtube.com/watch?v=CBEMSOwEpH8

Almost all our leaders are jackA$$es. Right now we have 2.5M confirmed cases. CDC says the unconfirmed cases amounts to 10 times the confirmed so 25M. It took us just ~6 months to get to 25M, exponential growth. If this continues, and nothing indicates it won't, then we will have 250M cases in less than 6 months, which is herd immunity. Just saw a piece about Bill Gates TED talk. He's worried about the homeless shelters and nursing homes which is where most of the deaths have been occurring. Instead of closing businesses we should figure out how to stop the spread in homeless shelters and nursing homes. All our leaders tell us that a vaccine is the only thing that will save us which is complete BS. Our own healthy immune systems are saving us right now. This means that a vaccine is irrelevant for everyone but folks with compromised immune systems. All the companies that are racing to develop the vaccine with $ signs in their eyes are wasting their time.
Hail
PS

Ron Paul represents another wrinkle in any easy, one-size-fits-all sorting of the Corona Coalitions. The man turns 85 in August. Yet he is an anti-Panic hardliner, and as far as I know he never embraced the panic at all.