From Russia with condolences 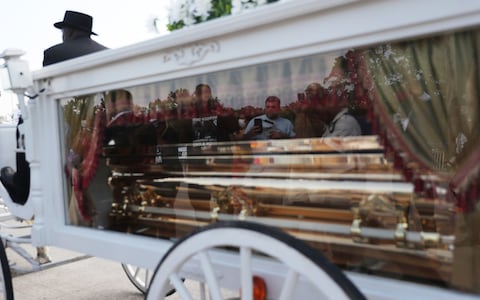 This post is directly from a comment on the unz.com site. Yeah, I don't know if this was written by a Russian. It did have Russian writing underneath it, but that could be the translation INTO Russian, or that text might not match at all. No matter - it's a pretty good description of what people in other, non-Western*, countries must think of this George Floyd stupidity.

The image above is from Steve Sailer's recent post Was June 9, 2020 the Silliest Day in American History? . Well, we go ahead and use the word "stupid" here, instead of "silly", with their slightly different meanings, but the answer is NO. We are neither at Peak Silliness nor Peak Stupidity yet.

BTW, Mr. Sailer also had a one line post with the title Uh, oh ... that goes " But what if George Floyd doesn’t rise from the dead on the third day? ". As they say, "Heh!"

The non-italic text is from the unz commenter, and the italicized from the Russian:

This just in from the Russian Internet.
From Russia with condolences:

For how many days now the most powerful state on the planet is taking leave of one of its best sons. Even Presidents are not buried like this. A gold casket, hundreds of thousands grieving and weeping, thousands of kneeling idiots begging forgiveness from the Black population in some states. The mayor of Minneapolis holding on to the casket in order to not collapse from grief, pressed to the corpse of one of the most worthy of the worthiest citizens of America, the mayor sheds crocodile tears and excess mucus. His sobs are riddled with wailing cries of “forgi-i-i-v-e-e me-e-e-e-.” The former wife of the slain one sobs drowning in her own drool. True, the last time she saw him was six years ago when he left her with a three month old daughter. He never once sent his former wife any money for the child but the unfortunate widow has already been screaming for a week how she was left without anything to live on.

Because of this heartache, Americans have collected little by little $20,000,000 and the money is still coming in. The University of Massachusetts has set up a scholarship in the name of George Floyd. Could this learned husband read? We don’t know. Probably not. They don’t teach literacy in prisons. If events continue to unfold at this tempo, soon the Nobel Prize will be renamed “the Floyd.”

The Great Floyd was sentenced to prison for theft, for selling narcotics, armed robbery (the last time clenching the throat of a pregnant woman while he pressed the barrel of a gun to her belly demanding money)… then he went for a plea bargain, gave up all his counterfeit bills for which he received a reduced sentence. At the autopsy narcotics were found in his blood. Such is the national hero of 21st century America. We could not preserve this ray of light and so we remain in his debt. The work of Floyd lives on and grows. Massive robberies, felonies and rapes in mark of respect and grief for George whip through the Blue States of America. Reduced to rubble are the pretty neighborhoods of various cities including New York and Los Angeles. 89 policemen have been killed, a seventeen year old girl has been frightfully raped. Hundreds of Police and other cars have been burned, streets have been destroyed, squares, park lanes, swans living contentedly in city ponds have had their necks wrung… (until we meet again, Floydniks)…

With an advancing form of senile dementia, Joe Biden, candidate for the presidency of the United States, also fell on his knees today. True, he could not get up himself and needed help, but this will not daunt hundreds of thousands of admirers of Saint Floyd. They will vote in the elections for this redemption, for which, indeed, the Democrats are striving, not regretting anything. On your knees? No problem—on your knees!!! Face in the excrement?— with great pleasure!!! Anything you say, “Floydies.” And what is sad is that such is the whole Democratic party.

[What they don’t know in Russia is that this is one of the “dirty tricks” of American Party Politics, with a little help from the Deep State. Floyd is a psy-op. He did not exist like the planes of 9/11 did not exist. After all, all is fair in love and war.]

I'm not sure if it was a dirty-trick "psy-op". That doesn't matter much either. I don't think there is a need, as, in any country of 330,000,000 people, you're bound to have plenty of egregious incidents of all sorts every week, to where the narrative can be arranged to be based on the best one. By "best", for the Lyin' Press, that means "that causes the most outrage and trouble ..., but brings in plenty of viewers and readers".

You can't blame most of the Russian, Chinese, or any non-"woke" people from making fun of the stupidity that goes on in current-era America. However, we could have done the same some years back, and DID. It's important to remember that the smarter of us didn't blame all the stupidity on the regular Russian or Chinese people. We knew where it came from. It'd be nice to have the same courtesy.

What we should remember is that the average Russian or Chinamen during their crazy times would have had a serious chance of imprisonment or death from the STATE for not going along with stupidity such as this elaborate nation-mourning funeral for this stupid violent black man named George Floyd. That's not the same here ... yet. We should work to make sure it doesn't get that far. That means having the courage to fight with words right now.

* As you likely know, and as will be discussed in another post, much of Western Europe is into this same George Floyd stupidity.

Moderator
PS: Yes, I try to keep my sanity, Mr. Blanc, by only reading about this insanity from writers who understand it's insanity. As you know, I'm off the idiot plate, if nothing else, for blood pressure reasons.

I agree with your opinion of the profession of Psychiatry too.

This stuff is happening very fast. Could it go like the fall of the USSR? There were different reasons, but, man, I'm sure you recall that what could hardly be imagined in early 1988 was a done deal by the end of '89.
MBlanc46
PS Silly? Stupid? How about insane? I’m always skeptical about using clinical psychiatric terms to describe political behavior. “Liberalism is a mental disease”. Yeah, whatever. But given what I’ve seen in the past couple of weeks, I’m lost for language to describe what is happening. People seem to taken leave of their senses. They are completely out of touch with reality. If there’s not a term for it in DSM-V, there should be. Of course, the psychiatric profession is completely pozzed, so they doubtless consider us the deranged ones and the George Floyd worshippers the sane ones.