These are the bad Whites. No waiver for you!: 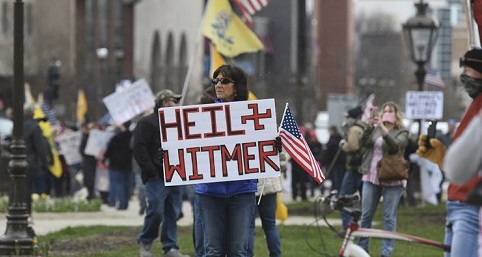 You've seen the Anarcho-Tyranny all around already, but Michigan and its Commie Governor really take the cake. Those citizens above, just trying to get their business and lives back in order, and wanting to be left alone, are the bad guys in the eyes of the Governor, and some of the legislature of the Wolverine State. Thousand of rioters destroying businesses and lives, and disrupting the lives of others are the good guys. Gretchen Whitmer has her waiver so she can hang with them (see With little social distancing, Whitmer marches with protesters from the Detroit News: 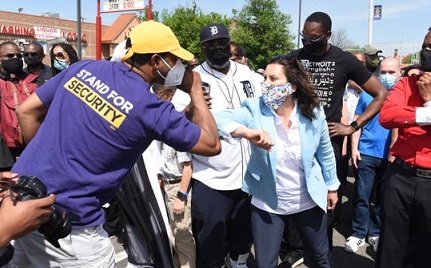 She's got an appropriate mask on, mind you, so she doesn't infect the others with ... her bullshit? I thought the deal was that the masks would not prevent the wearer from GETTING infected that well, though What does Dr. Fauci say ... this week? Either way, all the homies are going to infect each other, if any one of them has it. OK, it's all part of the experiment until the riots are over due to no more black men getting violent, and Nike sneakers only on back-order, therefore providing no more reason to riot , err, protest.

Peak Stupidity will have much more on this kneeling and groveling stupidity later, but I will note now that MI Governor Gretchen Whitmer is down on her knees here. Doesn't the Kung Flu spread via surfaces like, I don't know, the ground and stuff? Oh, right, she's got that waiver. 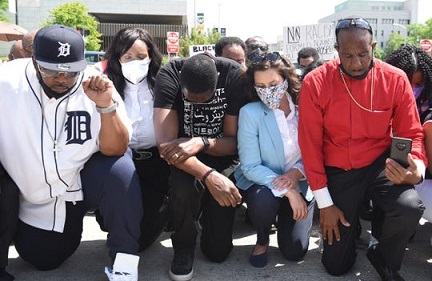 Who will be held responsible if this experiment gives the (B) result of last post? The giving out of virtual waivers to underprivileged black people, antifa Commie white people and other assorted riffraff could result in 10's of thousands (millions, per Ron Unz) of additional COVID-one-niner deaths. What is that, murder, manslaughter, 1st-degree, 2nd? I'm no lawyer, so I'll leave these details up to guys like Steve McGarrett of the 5-0:


If the result, as I very strongly suspect, of our nice little 2-week Riot Infotainment experiment is (A), as in, "no this is not the Andromeda Strain - that was just some Infotainment for the Spring '20 season", who should be charged or sued for all the death and economic devastation in that case? Instead of Steve McGarrett, I'll leave that one up to Mr. E.H.. Hail.

"When Democrats stifle dissent, removing posts from social media and shouting down anyone who doesn't agree with them, of course the polls show a lead for Biden. No one who is sane is going to say in public that they support Trump."

This time around, the Dems are going to harvest as many votes as needed to seal the deal. Coming to a Red State near you around September/October: Second wave, and mail-in balloting.
Moderator
PS: I didn't chime in before, as it's good to see a conversation here in the PS comments that doesn't involve the Moderator. Thanks to all.

I'll add this for Mr. Ganderson. It took me some searching, but I don't think it's Abe Vigoda in that episode ("Air Cargo"). However, he was in a 1974 episode of the 5-0 called "The Two-Faced Corpse".

For Mr. Blanc (your 1st comment): Yeah, Whitmer probably instinctively grasps this, but that won't get her out of the hypocrisy of it all. I'm sure the good people of Michigan see this hypocrisy, and I hope they act up even more (that is, against all the LOCKDOWN crap) due to this.
MBlanc46
PS ganderson: No hope for compromise that I can see. Separation is the only alternative to one side completely suppressing the other.
ganderson
PS. Scary thoughts of the day. Most if not all of the mayhem we've been seeing has come from those at the top of our society, on both the Corona Cult and the Riot dealie.

True that many of the rioters and looters were underclass, but there were lots of grads of prestige colleges in those mobs, burning shit down and justifying the violence.

In addition, whle I expect underclass black mobs to loot and riot, the so-called talented tenth are running inteference for the looters.

I'd guess, too that most of the Minneapolis City Council have three digit IQs- why are they so stupid?

One other point- I borrowed my neighbor's car for a trip to the dump this AM. I left the radio on NPR, as it was not my vehicle I didn't feel I could change the channel- it was like listening to a broadcast from a parallel universe. It made me feel there was no hope for compromise, as these folks see the world SO radically differently than I do!
ganderson
PS- was that Abe Vigoda in that clip?
MBlanc46
PS Bill H: The Lefties themselves need a chart. They often find themselves not knowing how to react to a conflict between, say, a white, one-legged lesbian and a transgender dwarf of colot.
Bill H
PS @MBlanc46
Excellent! Hierarchy of dogmas. I am on board with that. We need a chart.
MBlanc46
PS As with the hierarchy of needs, there’s a hierarchy of dogmas on the Left. Race, sex, and (poor relation) class, for example. Then there are the occasional dogmas such as social distancing.. Social distancing certainly can’t over-ride race, which has been at the top of the hierarchy for a long time, having over-taken class in the 1960s. Whitmer certainly grasps this.
Moderator
PS: That sounds right to me, Bill. It'll probably be a matter of what level of cheating by the D's it comes to this time around.
Bill H
PS Slightly OT, but related. Articles keep coming out which show that Biden has a lead, often reported as a big lead, over Trump in the polls. Ha.

When Democrats stifle dissent, removing posts from social media and shouting down anyone who doesn't agree with them, of course the polls show a lead for Biden. No one who is sane is going to say in public that they support Trump.

And, of course, anyone who is sane supports Trump.