As mentioned 2 posts back, I want to add a bit more about the Police State Security Theater outfit known as the TSA, you know, those blue-clad goons. Really, after traveling quite a bit, I can only hold so much animosity toward the individuals working there themselves. Decent jobs are scare. They are just people trying to make a living. I've been even friendly with the people I run into a lot there, but it doesn't make the whole thing right. "It's just my job" and all that ...

What I've noticed is the various stages of sickening (at least to me) these unreasonable search-and-seizure operations are, depending on the venue, the size of the airport being the main thing. There are the big hub airports, the medium-sized out-stations, and the small out-stations (some with 4 airline flights per day, even in normal times).


From that recent post, but spread out more than cattle, due to the Kung Flu Panic-fest. This is light compared to 4 months ago:

From the old Peak Stupidity post 16 Years of Spreading Democracy - They still hate us for our freedoms(?):

We can all see the sad mess of cattle lines, indignities, and general mayhem at the big airport hubs. The lines can be as long as Disneyland's Space Mountain, but with a loss of privacy and possible groping at the end of it, rather than a cool, scary ride. (You get the hopefully-not-E-ticket ride later on, for, well, about the same price as Disneyland nowadays.) Its loud, it's shameful (to me), and we all are glad to get into the big terminal and forget about the whole thing. That is, until the occasional time, these people go to the airline gate for "extra-special screening".

The medium-sized airports are probably the best for my liberty-minded sanity. You see, the TSA area, retrofitted in the early '00s for most airport terminals and set up in the design of new airport terminals, are usually in a central wide hallway area. The ticket counter [WTF is a ticket? - Ed] and all that is well outside from there, with TSA guys still involved in checking and moving around the checked luggage that rides in the aircrafts' bellies, or other cargo bins. When you get past the TSA area, you can get into the nice quiet gate area(s) and not see the whole mess.


This looks like a medium-sized airport deal, but it could be a fairly small terminal: 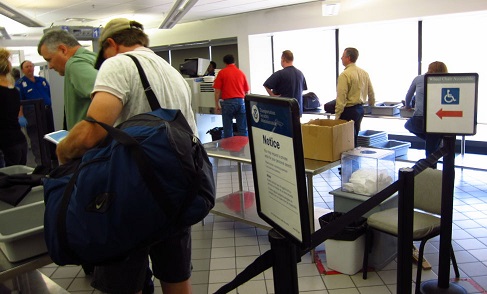 It's the small airport terminals that look the most like medium-security prisons. I have not seen any concertina wire... .YET. However, the way these place are set up, in their small buildings, passengers go through the TSA lines into what is nothing more than a holding pen. OK, it's a holding pen with two bathrooms and usually a couple of coke and nabs machines. "They don't have THOSE in prison, so there, you muh-Constitutional freak!", I will be told next time I mention this, the vending machines, that is.

You can't just walk up onto the airplane until the gate agent is working at it. However, that door to outside or the jet bridge will be locked whenever the agent(s), who do double duty going outside "security" to the ticket/baggage area a lot. Without even an agent there part of the time, it's just a pen, with no way out besides back past security, and, no, you don't wanna' do that.

The passengers coming off the plane that does a 30-45 minute turn-around will walk through a corridor that guides them out past the TSA. Many times, there are glass walls between the holding pen and the exit aisle. If you see someone you know, it's like some old movie or the prison visitation areas - you hear each other from the space over the wall, and you press your faces to the glass and give a kisses, hugs, or handshakes through the glass... then, of course, you pull out a stack of wipes, cause, you know... Corona and all....


PS: I don't have a good picture right now of the small airport terminal layout, but I'll get that later to illustrate my point... vs another 1,000 words.

Moderator
PS: You do have a point about the Melanin-unchallenged, Adam. They just don't care so much (about lots of stuff), which can be a good thing sometimes. At a Home Depot store, if the price of a piece of hardware is hard to determine the M/U type will just stick some number in the computer (register), while a white cashier will be more diligent, causing you a 5 minute hold up.

As for the small airports, it's the style of the place, mainly. I really gotta take or find an appropriate picture.

I never brought pot, but I did have some fireworks in my checked bag one time - that was pretty stupid, from what I know now.
Adam Smith
PS: Police State Security Theater does seem to be worse at smaller airports. They have more time on their hands and fewer customers to randomly select for enhanced screening...

ATL isn't too bad. I think it's because ATL is, or um was, so busy they don't have much time for as many airport theatrics. Gotta keep the cattle moving. Also, Hartsfield Jackson is managed and staffed mostly by people who are blessed with melanin. (Which, in this case, I think helps stop some of the stupidity.)

I too miss those days when it was fun to fly.

Remember when you could sit at the gate with someone awaiting their flight? No ID. No shoes off. No nonsense.

Remember when waiting at the gate for loved ones to arrive so you could greet them with balloons and cake and hugs was no big deal? Hell you could have a pizza party ready for their arrival if you wanted.

Remember when taking a little cannabis on vacation with you was as easy as putting it in a toothbrush case with your toiletries?

Now you have to check your Nerf guns with your other self defense items.

I guess dog and pony show security theater is the price we must pay to keep the evil doers from hijacking two commercial aircraft with box cutters and using them to smash three steel framed concrete skyscrapers into their own foot prints at free fall.

https://youtu.be/-ZlmHvd_RZU?t=30
Moderator
PS: Hah! (on the "check their eyes") It wasn't that awful long ago - still in 2002 when you could see people off or come greet them as they got off the plane. That's hard for me to even remember, Mr. Blanc, until I think about it. For young people, it wouldn't even make any sense in their minds, I guess.

Thanks for your comment. I will write more, but I've got to go for a while.
MBlanc46
PS I’m enough of an antique to remember when flying was fun. You showed up at the airport half an hour or 45 minutes before your flight, checked in at the desk, checked your bag, and ambled to the gate and onto your plane. I don’t recall having to show any ID. The seats weren’t so tightly packed and all the cabin crew were attractive young women. I was a pipe smoker in those days, and I could puff on my pipe in the smoking section. Okay, I can see that the last was perhaps not a good thing. All the rest have disappeared due to encroaching totalitarianism and multiculturalism. If anyone tells you how much better things are now than they were in the 1950s and into the 1960s, check and you’ll see that their eyes are brown.