I miss my Kung Flu TV

(I really wanted to get a nice bar or line graph of the data up to last week or so, but bing was pretty sure I didn't need to see that kind of data.)


With a new source of Infotainment now, black and antifa rioters all over the country getting on a TV, the Kung Flu show seems to have been dropped like a hot potato. It's like when Friends became big, and they took Seinfeld* off the air. Maybe it's just me, because I don't have a TV or any rioting Friends to get me one, but I'm just not feeling the anxiety from people anymore.

My wife hasn't showed me the numbers in most of a week, as they are struggling to get up to 110,000 COVID-one-niner deaths, lots of which may be bogus and 1.8 million "cases", a number which is even more bogus. (Yet, they give it to the nearest person - now there's some precision .. without accuracy.) I went into a fast food jernt (old Archie Bunker terminology), and no customers inside had masks on, and only the cooks had masks on in a serious manner. How can you hear the cashier when she's wearing a mask? So, she had it looped over her ears and around her neck. Well, these things do go for the jugular some times.

I talked to an employee at the job with a bandana and asked him if there was to be a robbery in Dodge City I should be worried about. He took it very well, luckily, as he could have had a six-gun for all I know. He took it off and told me how ridiculous he thought the whole thing was. He wore the bandana like a High Plains Drifter out of facetiousness. We then had a nice conversation as he kept his small water bottle in his hand. For anyone who may have wanted to rat on him about his not wearing a mask, he had "plausible deniability", he said, with his needing to hydrate all the time and all... Nobody questions hydration these days. Keeping hydrated is the new wiping your ass, or something.

Regular people seem to be past this hysteria now, maybe due to having seen the stories out of the experts go back and forth like pinballs. The web is still somewhat stuck on stupid, as I still get this same thematic map here, whenever I search on bing for "images" and "corona" or "COVID: 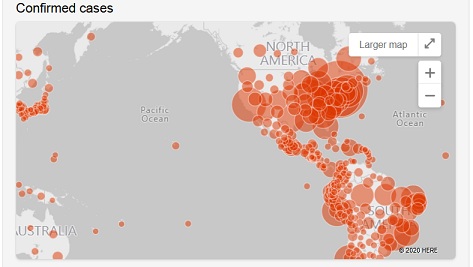 Look how HUGE those orange circles have gotten! That one based in New York is swallowing up land from Ohio down to northern Alabama! The whole country is toast, toast, I tell you!

It probably is the warm weather everywhere, helping attenuate this virus or the spread of it, along with the fact that it's pretty much a bad flu. Possibly, we'll have another spurt of it in the late fall. The Lyin' Press can only hope these riots go on that long, unless they can get that number up a lot more, somehow. I think this old standard is a lost cause, though, sorry to say: 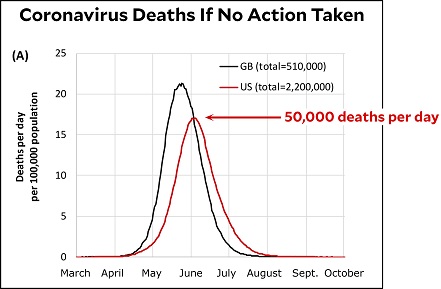 If you can even believe the numbers fully, we are up through 5%, that's five percent of the numbers bandied about by the idiots that made that graph. What kind of percentage do you have to be below to where an apology is in order?** Just asking for a friend.

Look even the rioters, who should know better, what with all the new TV's they've got to watch now, are not wearing masks. How do you Social Distance during a riot anyway? Do you need to stay 6 ft. apart while smashing up a Target store***? That just takes the fun right out of it.

And then there's Sweden. Mr. E.H.Hail had lots to say about the HUGE disparity between predictions and the reality of COVID-19 deaths in Sweden on his blog. A picture is worth 1,000 words, they say, so here: 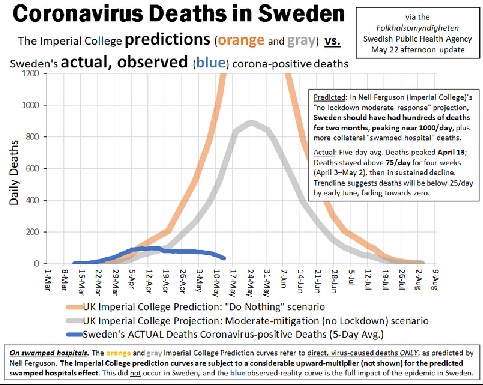 No, that blue smudge is not just an attempt at hand-drawing the x-axis. That is the actual death data! Sorry about the lack of resolution of all the text. Please got to Mr. Hail's site, or just his here to see it much better.

PS: I kid somewhat, as I do OWN a TV. It has never been hooked up to cable so is just used for playing movies on the DVD player.

* Like a lot of shows, it really did start to get too stupid and unbelievable at the end there.

** Last I read, Ron Unz is still sticking to his story and calling people who doubt it ranting right-winger hoaxers.

*** See earlier field reports from our excursions to Target here and here.

Moderator
PS: Mr. Anon, thanks for the comment with the simple numbers.

"Compare Sweden, which had no "lockdown" but only followed fairly traditional public health measures (cancelling large public events, etc.) with some US states that had stringent lockdown measures."

Your wish is my command - https://www.peakstupidity.com/index.php?post=1449

That is a comparison of Sweden to Michigan, the latter a sportsman's, oops, totalitarian's paradise. Michigan came out the worse, at least at the one-month-ago mark.
Mr. Anon
PS

Another way of looking at the swedish experience:

Deaths from Covid / Total population (as of May 31st):

Compare Sweden, which had no "lockdown" but only followed fairly traditional public health measures (cancelling large public events, etc.) with some US states that had stringent lockdown measures.
Moderator
PS: I don't remember all the details, but I read through your major post on the Swedish experience, Mr. Hail. I've put a reduced-size graph here with links to your stuff.

As you can read in comments, I read your part 13 today too. Great stuff.
Hail
PS

The newest graphs as of today still look like that. They were supposed to have many tens of thousands of deaths by now (virus-caused-deaths not deaths-with-virus, btw). The trend was obvious by about the third week of April which inspired my first declaration of victory for Sweden post.

The long story short is the Neil Ferguson team and others who predicted millions of deaths were wrong by closer to 100x, they guessed 100x too high rather than just 10x too high. This was all unnecessary. Especially given the Corona-Riots, but much, much else.

The riots are dramatic and the perfect kind of story to get rid of Corona-prolefeed coverage, but they are not close to as destructive as mass unemployment and the other Corona-Response disruptions. We tried to warn them...