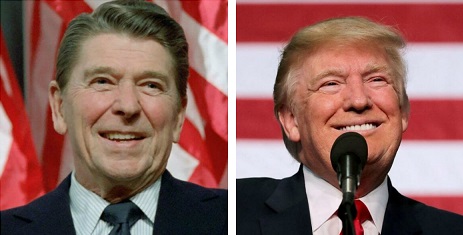 In late November through mid December of '18, Peak Stupidity had 4 posts with the theme Ronnie vs Donnie, comparing the current President to former President Ronald Reagan. (See Intro., The Personalities, Foreign Policy, Domestic Policy, and Conclusion. The picture above is from that series of posts.) Well, listen, Trump started it, with the statement "I Blow Ronald Reagan Away". From the "Conclusion" linked-to above:

Peak Stupidity's opinion has not changed on this over the last 1 1/2 years.

Ann Coulter's latest column, Quarantine Game! The Kim Jong Joe Plan is more about Joe Biden and the Blue Squad's election plans than about Mr. Trump. However, the middle 3rd of her column, excerpted in its entirety, rags on the clown world that is the Trump Administration:

Lest we forget, in Donald Trump the Democrats have a man [partial list] …

* who got into office and, the moment two people raised an objection to his fulfilling his campaign promises, said, OK, never mind! I’ll just tell my supporters I did it;

* who is more likely to adopt policy proposals from Kim Kardashian than the Angel Moms;

* who claimed to support gun rights, then mocked the NRA from the White House, while calling for absurd gun control measures (“take the guns first, go through due process second”);

* who won the presidency with zero Wall Street money, then immediately turned the keys of the kingdom over to Wall Street;

* who thinks his daughter, whose only skill is designing shoes (allegedly), is the perfect person to sit at a table with world leaders, including the German chancellor and British prime minister;

* who brings a special counsel on himself by going on Lester Holt’s show and seemingly announcing it was his decision to fire the FBI director because of the Russia investigation—then blames Jeff Sessions;

* who created a fake Time magazine cover featuring himself to hang on the walls of his golf clubs (“DONALD TRUMP: The ‘Apprentice’ is a television smash!”);

who is a very coarse and vulgar person—which could all be forgiven if only he had the little voice in his head that said No, I owe these people. I promised them. I’ll pick up the phone and call congressional Republicans.

Miss Coulter doesn't exaggerate here either. Her last paragraph is just what I was thinking: Were the President getting a lot done for us,as in putting a serious dent in immigration and pushing serious law to dent it further and bringing American soldiers, sailors, and airmen back home from all over the world, I wouldn't care about any of the silly stuff that comes out of his mouth and the silly behavior described above. He might still be something of a clown to me, but he'd be a lovable clown, not this embarrassing clown I voted for.

The stupidity of President Trump, seen by the world daily or read in tweets hourly, is a far cry from the statesmanship of a Ronald Reagan. It is such a far cry that the President Dwayne Elizondo Mountain Dew Herbert Camacho Administratioon seen in Idiocracy seems not 486 years away, but more like 15 or 20.

Peak Stupidity is a fan of the Conservative/Libertarian President Reagan (OK, most of the time), but we don't think him a Saint. It's also not like we feel statesmanship and aplomb is more important than honesty and integrity in a President - see A good trait of Americans in praise (to some degree) of Jimmy Carter.

It's not like former Presidents haven't made a few stupid gaffes. (That throwing up on the Japanese official by George H.W. Bush way back was one of my favorites.) It's not like they didn't change their mind on important issues once in a while, often as a part of normal politics. They all lie to some degree - sometimes it's pretty much required by diplomacy, other times probably demanded by the Deep State, and other times just flat-out Clinton-esque lying to fool the public, sometimes just out of habit! The stupidity level is just so high now. There is nothing resembling the calm statesmanship displayed arguably right up through Bill Clinton and even Øb☭ma, I hate to say.

The level of speech and level of stupidity on display should not just be put on the shoulders of Donald Trump. He often responds to stupidity with his own stupidity. So there! Were someone else in office at this time in American history, I think there would be a lot of the same. I blame a good deal of this on twitter, but not all.

Americans have not been very selective. That's due, of course, to the fact that they are offered a poor selection to start with via the lens of the Lyin' Press, which is full of folks that would fit in very well in the world of the Camacho Administration. You get a guy like Paul Tsongas back in '92, or a Ron Paul in '12, who tries to explain the roots of problems in a calm manner with a few big words, and the Lyin' Press doesn't know what to make of him. They can't sit still for that long.

It's shameful to think of what the world sees of this lack of statesmanship, and, basically, a clown show by the Trump Administration. Again, Ann Coulter and I wouldn't care if the man got stuff done though.

Moderator
PS: Mr. Ganderson, I agree that there's no other choice. I'll be voting for Trump. This is basically the intro. to my next post (on this subject) in which I want to show a little bit of the good (per VDare, whose writers are almost always hopeful).
Moderator
PS: Robert, OK, now you stole my thunder on the Carter rabbit attack story (missed him by THAT much). Haha, I was about to include something about that and other gaffes, but you have filled us in very well. Thanks!
Ganderson
PS. I pretty much agree, but what choice did/do we have? I guess Derb’s right, if voting mattered they wouldn’t let us do it.

And I do like the way the Trumpster doesn’t roll into a ball when attacked by the press.
Robert
PS:

Carter was attacked by a rabbit.
Reagan was shot.
Trump, well, there are still a lot of cream pies out there.

P.S.
Carter and a rabbit; Reagan and a bullet.
Bush the Elder and Miyazawa's lap; Clinton and Monica's dress.
Nixon meets Elvis; Kennedy meets Monroe.
The 'good' Roosevelt and San Juan Hill; the 'bad' Roosevelt and a wheelchair.

What other pairings are there of presidents and stories that seem illustrative?