Mr. Confucius, are you, or have you ever been, a Communist?

Confucius say "man who follow Renin, I imagine soon have no possession." 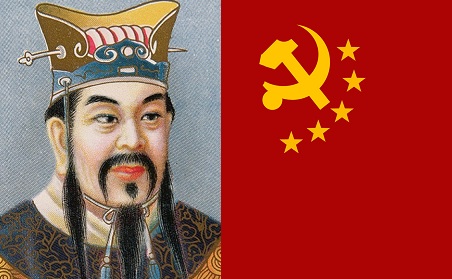 Peak Stupidity took a lighthearted look into the philosophy of this man they called Confucius. early on, after our first month of blogging. The real confucion with the the philosophy came about due to confucion with a different Confucius, one Mr. Bill Confucius of Paducah, Kentucky, not out of Qufu, Shandong. As usual the mistake can be blamed on an intern, whom there's no point in firing, due to he doesn't get paid anyway.

Upon surfing the Instapundit site, an old habit come back to me due to my working on my unz.com addiction, I came across a video from Fox News, in this article regarding the Confucius Institutes. I've dealt just a small bit with one nearby a long ways back due to some interest in their teaching of Chinese. Per the map below, they are everywhere, man: 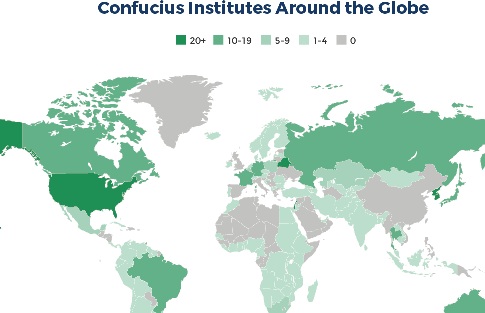 The images is slightly cut-off to fit, but I'll just tell you there is no Confucius Center in Antarctica ... not yet.)

This organization has been advertised to be about spreading Chinese culture and language around, especially to those Chinese who are abroad. It's true that lots of Chinese kids born to Chinese parents in America don't speak, much less read, a lot of Chinese. If you know how exceedingly stupid the Chinese written language is, you could understand why (see On the Chinese Language .. and some music from Asia Aja for more). These offices sponsor and hold language classes for kids and adults.

That sounds like blatant imperialism, but, really, what's wrong with that? After all, the money comes from China. That's a relief! You expected it was all paid for by Uncle Sam, as I would have, didn't you? Uncle Sam is a real sucker sometimes... OK, a LOT.

Till now, I'd thought of it as like that Shen Yun deal, weird to have so much of that around, but generally harmless. However, per the Fox News guest in the clip below, this Confucius Institute is nothing but an arm of the Chinese Communist Party back home. Now, granted, that doesn't mean the students or anyone associated with the local branches are dirty stinking Commies, but that's because they dress nicely now:


Diversity for thee, but not for wei.

(I notice they are using green, not red. Clever!)

There is both industrial and military spying involved, something Peak Stupidity has re-reported on (VDare origins) before - see ICE jails Chinese Spy Si Chen and Current-Era Espionage and Immigration, for these examples.

Though relations continuously got better and better between America and China from, say, 1980 onward (it helped immensely to have Mao deep-sixed a few years already) through the last few years, Uncle Sam the Sucker has let the Chinese push harder and harder. The trade deals were the worst of it, but the shenanigans at American universities come in a close 2nd.

I've written before that I get along pretty well with the Chinese people. Most of them, even with that seemingly-nutty-to-us Middle-Kingdom-uber-alles attitude, are just hard-working, intelligent people, not up to no good. This Kung Flu madness, and the soured relations that have followed, could help in toning down the Chinese cultural invasion a bit. Some of these Confucius Centers are being shut down. The Chinese people at those particularly universities are likely too busy studying to give a damn.

As for the man Confucius himself, silly sayings aside, he was much too wise to have fallen for anything as utterly stupid as Communism.

Moderator
PS: Sorry, Federalist, that was an allusion to about 10 posts down - - https://www.peakstupidity.com/index.php?post=1470

I was under the assumption that ALL you readers read ALL the posts and are hanging on the edge of your seats for the next ones ;-} It means something non-ironic, as Alanis Morrisette wrote the song "Isn't it Ironic" about things that are not at all ironic. My use of "non-Morrisette fashion" is ironic, BTW. Haha, and I misspelled her name in my comment too, but not in the post. Isn't THAT ironic? (I don't freakin' know ...)

OK, focus! In reply to your 2nd paragraph, I would think that Confucius is revered by the Chinese and lots of people in the West for being this super wise man, like a Socrates or something. I'm not saying I disagree, as I didn't even read the Cliff Notes. I guess the Chinese Commie Party uses this name for that reason.

Yeah, I'm in agreement with you, as these current CCP rulers are authoritarian but not Communist in ideology, as they know what happened during 40 years of that shit and don't want a repeat. It's no conflict to use the name Confucius as it may have been during the Mao hard-core Commie era.
Federalist
PS-
Mr. Moderator, what does "non-Morissette" mean?

I assume that, at least in the early days, the Chinese Communists were not fond of traditional Chinese culture/philosophy such as Confucius. Now, maybe they're really just about authoritarian one-party government and aren't really concerned about Commie doctrine.
Moderator
PS: Federalist, it's ironic in a non-Morissette fashion, you could say. However, Confucius was also not a believer in freedom and liberty in the way of America's Founding Fathers by any means either.

Though I was just having fun at the bottom of the old post (linked to at top here), my basic point was that the Confucius way is not the (real) American way.
Moderator
PS: It was about 10 years ago, I think, that we were checking out information on the Confucius center, Mr. Hail. I was perhaps naive about it, as my time in China (been there 11 times) gave me the impression that most people's lives were not as affected by the Party as ours are here by our Party (both wings, blue and red).

I learned a lot more over the years from individuals about what does go on behind the scenes. Plenty of Chinese people in America are not up to no good in that PRC sense, even if they are not dissidents by any definition. What they do do, and I can't blame them personally, is take advantage of everything America has to offer. This is not reciprocated by the Chinese, and I really can't blame them either. As I wrote, Uncle Sam, and lots of Americans themselves are suckers. We've had it too good for a long time.

Part of this being taken advantage of over the last 30 years has been a non-violent near-takeover of the graduate schools of science and engineering. My answer to you was going to be longer, but this is bringing up post-sized material, so I'll do it that way.

The title or main point will be "you act like you own the freakin' place".
Federalist
PS-
I suppose it's ironic that a Communist Party's wholly owned subsidiary is named for Confucius.
Hail
PS--
I'd add that the Confucius institutes being a branch of the Chinese regime is not some Fox News gues hypothesis but has been the understanding/position of US academica/govt/policy-think-tanks for years.

Fox has its own agenda. What exactly it is I cannot pin down precisely and isn't important to make the point, anyway. Experience teaches us that Fox is always a lagging indicator. Key Fox personalities got Corona wrong (I believe Laura Ingraham alone held the torch for the anti-Panic side through it all).

I don't think it's an exaggeration to say that almost anything associated with PRC-China is in some way part of the regime, except the hardcore dissidents in banned groups. The test is, would [entity] be allowed to exist if it were anati-regime? If not, it's effectively a part of the regime.

China (and other East Asian countries including close allies) and the West have not played on level ground in the past thirty or even close to forty years.