Sometimes, you just don't know who to root for, such as while reading the headline of the recent VDare article Culpeper, Virginia: Twice-Deported Illegal Infects Police with COVID-19 and Gets Released . "You go! You're both losers!" No, but low-keyed anti-cop attitude aside, Peak Stupidity notes that the content of the article is more of the prevalent egregious immigration stupidity.

Long-time VDare correspondent Allan Wall has a story of how ridiculous the anarcho-tyranny is in this country, in this case, in Culpepper, Virginia. From his intro. about this town:

The town of Culpeper (formerly known as Culpeper Courthouse and before that as Fairfax) was originally surveyed by a young surveyor by the name of George Washington, and was occupied by both sides in the Civil War. So there's a lot of history there.

"Honey, I could have sworn this was part of America. Weren't we just through here 10 years ago? 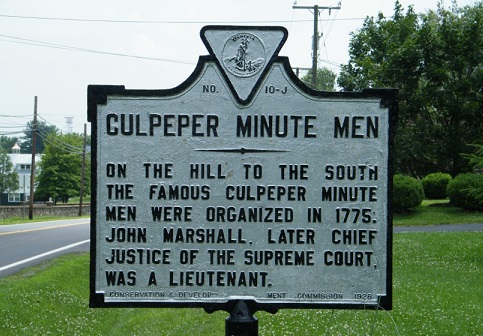 Now, Mr. Wall should have some of the most adherence of all the writers on VDare to their attitude of "don't hate the immigrant - hate the immigration", as he lived in Mexico for a long time, is married to a Mexican lady, and has 1/2-Mexican kids with her. As is also the case with all the writers on the site, he is very civil in his writing. He does come off kind of pissed off in this one, when I read between the lines.

Now it’s a town where a foreigner can flout American law and infect American police officers, then be released.

Two Virginia police officers have coronavirus after they physically detained a man accused of assaulting his girlfriend. Police in Culpeper said the suspect, who is in the country illegally, also tested positive for the virus. Police said even though Immigration and Customs Enforcement was contacted, the suspect was released the same day he was arrested. [2 Culpeper police officers have coronavirus after detaining a domestic violence suspect who tested positive by Lindsay Watts, FOX 5 Washington D.C., May 5, 2020]

The video accompanying the article says the perp was previously deported twice. And that’s backed up by this WJLA article: Virginia cops contract COVID-19 after 'hands-on' arrest of twice-deported assault suspect, by Elliott Henney, WJLA, May 5, 2020.

Yet here he is again, flouting our system.

Look at the privileges the perp enjoys:
1. In the country illegally
2. Deported, returns
3. Deported again, returns again
4. Commits an assault
5. Has COVID-19 and infects police with COVID-19
6. Gets released the same day
7. Has a protected identity, his name isn't publicly mentioned.

Yep, I was thinking of the word "anarcho-tyranny" already, when Mr. Wall asked:

Americans have gotten in trouble for much less in the Age of coronavirus. Is this an example of anarcho-tyranny?

Yes, yes it is, Allan. In fact, the whole alternate system of justice for illegal aliens*, since they are alt-documented, you know, with their altered documents and all, is a prime example of structural anarcho-tyranny. (See, I can use that word "structural" as well as the next man.)

Back to the Fox 5 article:

Maj. Chris Settle, with the Town of Culpeper Police Dept., said three officers responded to a domestic violence call around 2 a.m. on April 28. He said the suspect was assaulting his girlfriend even as police responded. “Long story short, we had to utilize use of force to get the male in custody,” said Settle.

[Major Settle] said a few days later, two of the officers tested positive for the virus. “As of today [May 5], they have mild symptoms at home in the early parts of this, and we’re hoping for the best,” he said.

The third officer is in quarantine.

To its credit, the Culpeper Police Department did contact ICE. Not that it helped.

Settle said police contacted ICE to notify them of the arrest. He said typically immigration officers would pick up the suspect from jail, but that didn't happen this time. “ICE did not come get him, and I think for obvious reasons,” said Settle. “I think because he had covid-19.”

After that, the guy is released.

Two of the guys had mild symptoms and the other is hanging out in paid (I'm sure) quarantine. This is not your great32-grandfather's Black Plague.

There is only a little bit more of Allan Wall's article that I haven't excerpted. This kind of thing goes on all the time, but it's just the Kung Flu infection angle here that makes it very timely. We are, after all, to keep proper Social Distancing, per our elites and experts who are there to tell us what to do, other than cower in fear of the CORONA. So next time the cop beats you about the body with a stick as he warns you to "STOP RESISTING", you should ask him to please keep some Social Distancing, or you'll start infecting. We're gonna need a bigger Crown Victoria.

* One I tried to explain to Ron Unz one time - nope, no comprendo, it's a riddle.

MBlanc46
PS The Republic that our ancestors built is well and truly over. Psychologically, I have a hard time accepting that, but items such as this drive the point home so forcefully that the conclusion is unavoidable. Political divorce is the only option that allows for anything of the old nation to survive. I won’t be around to see it if it happens, but I enjoin everyone to make that his (her if any on the distaff side are out there) goal, Regarding NPR, I listened to it quite a bit in the late 1980s. One evening during the first Gulf War there were some particularly egregious (at least to me) things said so I switched it off and have never switched it back on. Those cockroaches had better be very afraid if bands of irate citizens with pitchforks and torches ever hit the streets.
Ganderson
PS The Maniacs were from Jamestown, NY, which is one of those weird outlier places that attracted a bunch of Swedes. Most of my square-headed brethren settled in an area roughly bounded by lines from Chicago to Bismarck, down to Omaha and back to Chicago: with a significant number heading west to Seattle. Jamestown and Worcester MA attracted a few herring- chokers as well.

As for friendliness, the 413, where I live, is way friendlier than east of the 495 corridor. Come on up sometime!
Moderator
PS: Yeah, I know, some of this (the EDIT button) may be pretty damn easy too. I need the family to be away a period to concentrate on software.

I feel your pain, though I can edit my own, haha. On unz, even after 2 chances to edit (the PREVIEW and the 5-minute window - on some browsers), I still see typos out the ying-yang in my comments.

Re: NPR and a good tie in with software unfunctionality here: I have a post or two on NRP from way back. They probably have the Media Stupidity topic key, but I can dig them up later for you. My impression from the early 1990s (a roommate would listen) and then a few minutes of it recently, is that the announcers keep that quiet tone that lulls you into serenity ...

... until you realize what stupid shit they are actually saying!

That's got to be gloomy alright, winter in the northern plains - not everyone is cut out for it - Somalians - I think not. Natalie Merchant and her band are from Mass, right? It can get its share of gloom. I lived there for a short while. The friendliness of the native people (or lack thereof) made New Yorkers seem like down-home hospitable Southerners in comparison.
Moderator
PS: Great stuff, Mr. Ganderson. "Oh no! Please don't give me the illegal alien treatment!" and "Doing the wife beating our .." Hilarious.

On those medical conditions of the homos of which you speak? Were gerbils involved? I'm just asking .. you know ... for a friend (his name is Herbie - we haven't seen him in a while, he's not under the couch...)
Ganderson
PS Weakerthans’ Plural possessive

And only two Ns in Winnipeg!

Mr Moderator, you need an edit button..
Ganderson
PS. Good morning fellow stupids!
Supposedly Gov. “Tall Deval” Baker of the Commonwealth of Massachusetts is going to announce something Friday. My guess is extends the lockdown- after all there are still some viable businesses left in MA- can’t have that! Stay tuned.
Re our Illeago-American friend in the Old Dominion; Howie Carr always says that if he gets arrested he doesn’t want special treatment, he just wishes to be treated like an illegal alien. Anyway, Mr. Moderator, our undocumented friend is just beating the girlfriends Americans can’t be bothered to beat.
Also listening to NPR this morning (my wife’s radio) I noticed they are all in on the panic- one of the NPR shrews called it the most serious medical event any doctor has ever seen (many homos might disagree). Wonder how many NPR people have been furloughed? Note: I haven’t either, but that’s because I’m so essential, err a public sector hack..
And while I’m on about it, NPR announcers come in three flavors it would seem: hectoring shrews, senile old men, and big fags. Why does any tax money go to support this dreck? Inquiring minds want to know.
And, to wrap up this morning’s potpourri “ Like the Weather” puts me in mind of the Weakerthan’s “One Great City”, which is about the prairie metropolis of Winnnipeg. .....”a darker grey is breaking through a lighter one”. Anyone who grew up on the northern plains can appreciate the sentiment.