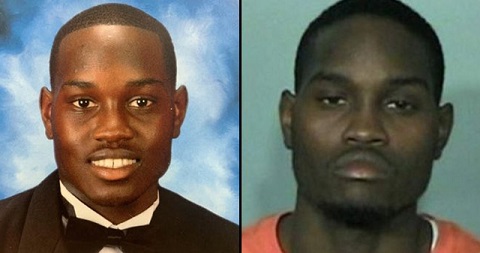 
Due to my my household being what some may dub an Infotainment desert, I had not even heard of that this Sequel to Trayvon had come out yet, as produced by Lion's Gate Lyin' Press Pictures. A friend told me this story, but he had already checked out enough other information to see this is another one-sided narrative so far. I then noticed the newest Michelle Malkin column. It has more information, not so much on what really happened there in Glynn County*, Georgia, but on the couple of hate-mongering race hustlers, Shaun King and Lee Merritt, along with one Benjamin Crump who are the go-to guys for starting anti-white pogroms, riots of mass destruction, and that kind of thing, based on lies.

A link there led me to what could have been a new site to peruse daily, called Information Liberation, but for the "article" in question being mostly a series of tweets.** It's just me, I guess, but that's not my favorite format for reading material. However, I like the ideas presented in Mr. Chris Menahan's 'The Trayvon Hoax' Gets A Reboot With The Shooting Death Of Ahmaud Arbery . It's his idea to compare this latest racial brewhaha to the Trayvon Martin self-defense effort of (Wow!) 8 years ago, as with a movie sequel.

There are lots of similarities between the two widely publicized incidents: (First let's just call George Zimmerman white for a bit here, not to go along with the Lyin' Press' narrative, but to make this easier to write.) Both started out with white citizen's trailing of a black man suspected to be up to no good in his/their neighborhood. (Yes, someone 6 foot tall, 200 lb at any age should be thought of as a man in the realm of self-defense.) Both of these black guys, instead of handling the situation like a rational human being (likely because they were guilty of something or about to be) went into fight-or-flight mode and picked the former. In neither case was that a wise choice.

In both cases the white guy(s) were doing nothing but inquiring and warning black guys who, in their view, were up to no good. In both cases, they were probably right, we find out later. In both cases, the black man got shot and killed for being the aggressor in an act of self-defense.

In both the cases, the media have gotten the American public, at least those who still believe their one-sided narrative, and almost all black people (because, black), up in arms. This behavior by the Lyin' Press will again motivate the law enforcement and justice system to do the wrong thing. If they were to do the right thing (which they never do) and not press new charges on the white men involved for the legalities involved that obviated that in the first place, riots would probably ensue. So, they give in to media-instigated pressure and sacrifice another white man or two in the name of diversity and temporary peace. Then, the jury gets the case, and it's the same story except with more of a chance of a good person doing the right thing, ... which will ... cause riots.

How is this even a sequel, as it's almost the same story? The Lyin' Press and race hustlers (as described in Michelle Malkin's column) are hoping to have a different outcome this time. Last time the truth came out, and the good guys (George Zimmerman and The Truth) won, after one hell of a struggle. They are hoping for a different outcome with this next innocent young black kid Ahmaud Arbery. Let's get the truth out there.

That Information Liberation page linked-to above does present a lot of good information, so I highly recommend it to our readers. In addition to focusing on the incident in Brunswick, Georgia, Mr. Menahan also brings up the many horrific white-on-black murders that never get presented on 24/7 Infotainment. This is the stuff discussed by Paul Kersey on unz.com on an almost daily basis.

This new blaxploitation flic has not been finished yet. I don't see how they can give it a happy ending, unless riots or injustice are considered happy endings. It will premier this summer at a venue (hopefully nowhere) near you.

PS: One of the tweets in the Information Liberation article was from one LeBron James, an athlete who tweeted out nonsense to support the team race. My first thought was: didn't this guy just die in a helicopter crash with a big to-do made of it? See what I mean about the Infotainment desert I live in?

* BTW, right across from the Glynn County (GlynnCo) Airport, outside of Brunswick, there lies the FLETC, where Federal employees of all sorts of agencies train to shoot, many of who make one wonder what they are doing with guns. They are not allowed to be involved in this, and rightly so.

** I don't dis-recommend the site just based on this one article. I'll have to see if I come to like it over a few days.

Less than a hundred years ago. 'Mister, could you afford [to give me] a dime' could buy TWO donuts and a (bottomless) cup of coffee.

You certainly knew this already, but it still staggers me.
Compound interest, inflation, and all that.


P.S. Forty years ago, 'Huber Memorial Beers of Old Milwaukee' could be bought for $0.89 (where is that cents key?) a six, on sale. It was worth every cent.
Moderator
PS: Mr. Smith, you had me going for a minute - I thought it was a real poster and had to go to the rest 'o the web to check it out. Fool me once, hahaha!
Moderator
PS: Ha, that was quite a few jokes in 2 sentences, Alarmist! I suppose you're right. The COVID caseload in Glynn County has just increase 4.28%! In one day! (Well, in about whatever time it took the jogger to bleed out ...)
The Alarmist
PS
The side by side pics are ample evidence that the Trump years have turned your average, happy-go-lucky black lad with Obama-years promise into a despondent, angry, scavenger looking to get some fresh air in a lockdown world. Trump is to blame for this obvious COVID-19 fatality.
Dtbb
PS:Mr. Blanc, I was being very tongue in cheek, pen in cheek, cursor in cheek? It's all very confusing.
MBlanc46
PS Oops. When I was a lad—early 1950s—the donuts at Leo’s Donut Shop on Fairview Avenue at the tracks were a dime a piece. Apparently, I shall have to update my list of colloquial expressions.
Adam Smith
PS: Trayvon Martin Auditions Continue...

Another aspiring rapper snuffed out...

https://i.kym-cdn.com/photos/images/original/001/005/067/b4e.png
Moderator
PS: Dtbb, I guess Mr. Blanc's expression has been another victim of that low, low inflation of ours.

I would get a few now, guns that is.
Dtbb
PS:Mr Blanc, the last time I bought a donut it was $1.09 plus tax. I'm confused.
Dtbb
PS:I have never owned a gun in my life, shot quite a few though. I'm seriously considering getting a 12 gauge.
MBlanc46
PS I’d bet dollars to donuts that a Biden administration would make going after guns a very high priority.
Moderator
PS: Dtbb - I can see a white man in this situation who knows he's about to get railroaded like this (including time in prison which could be a death sentence) decide there's nothing more to lose. That's when we'll see some real action. That'll be the time when the gun confiscators will gear up. We'd better all be ready for that.
Moderator
PS: Robert, maybe they (NPR and the others) are gearing this story up to be another month's worth of Infotainment for when the COVID-19 audience goes to the kitchen to grab another beer, or gets outside for some rays of sunshine.

Now, I'll go check out a house under construction with my young boy to teach him how you build stuff, but it's in my neighborhood, and, yeah, not during a run - that's a bogus story allright.
Moderator
PS: Yeah, Mr. Blanc, I'd had a good experience at "the Federalist", and your comment reminded me of this. That's too bad that they've got to get on that bandwagon. You're right, if they are going to bring up this incident, which has nothing much to do with their purpose in life, why not be fair about it.

The Newsom case was downright grisly. It's been something like a dozen years, if I remember right. No riots, no White Lives Matter, and no stories about those poor souls and their families in the 24/7 Infotainment. What, no human interest?!
Dtbb
PS:That Crump Chump was involved with the stand your ground case in my hometown. The guy can barely speak in complete sentences. It was hilarious seeing him on the news. The white guy was found guilty and has been attacked in prison already.
https://www.fox13news.com/news/attorney-clearwater-stand-your-ground-shooting-was-cold-blooded-murder
Robert
PS: Thanks, once again you have provided a timely service.

I usually listen to NPR while running my errands. Today, I was surprised to hear them spend their time fulminating about something other than the Orange Man, or Covid-1984. For that I was grateful.

But who was this new paragon of virtue, unfairly struck down while doing what he loved --- jogging, such a healthy, innocent, activity.
MBlanc46
PS Just heard about this nonsense at the Federalist, of all places. Bowing and scraping so that everyone knows that they’re not RAYCISS! I’ll give a cr*p about this guy when the Christian-Newsom abomination is no longer “local news”.