Ann Coulter with T, err, Q & A on the Panic-Fest

This image of these 2 pundits is from our 6-month-ago post "Our favorite pundits have grown up." This post is referring to writing by the one on the left, of course, Miss Coulter 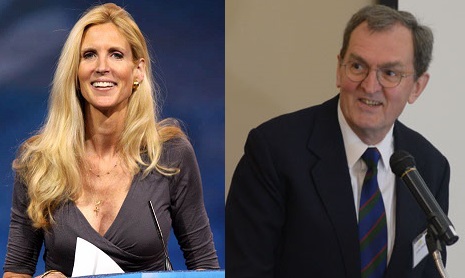 (Just trying to save on server space to keep the planet cool and avoid another letta from Greta).


This and the next post will be just "hey, you gotta read this" posts. Peak Stupidity is allowed a few of these now and then like any other lazy-ass pundit shop*. Both articles are on VDare, THE go-to site for all things immigration.

Ann Coulter bats a .900, I'd say, on this one, a little under-par, to mix a coupla metaphors. She's had a .980 average over the last 15 years, with just a couple of sacks on AA and "the pot". [WTF? - Ed]. With her high-level of snark, it's hard to tell exactly. I may be underestimating her on this one. Miss Coulter has definitely been on the anti-panic side of the Kung Flu Gap. Take a look at her latest column, Q & A On The Wuhan Virus: We're Done Now—Except For An Immigration Moratorium!.

What do you think of the media’s coverage of the Wuhan virus?

It’s like a nonstop “War of the Worlds” broadcast, which in 1938 panicked more than a million Americans into believing Martians had landed in New Jersey, sending people fleeing to the mountains, loading their shotguns and barricading their homes. And that was a single radio broadcast!

Today we have nearly all of media—which I notice are doing fantastically well during the crisis—terrifying the public about an apparently indestructible, omnipresent virus.

You don’t think the China virus is as dangerous as they say?

Well, it is a virus capable of eliminating all human life, which would be bad, but not all bad because then you’d never have to see another TV commercial with some company saying they consider you “family.”

I don't think we'd have to eliminate all human life, Ann. Some more of us could quit watching the TV and we'd never see another TV commercial with some company saying they consider you "family". I have never seen such a commercial.

On the Lyin' Press, Ann says:Blow it up with extreme prejudice.

Apart from the election, why would the media want to impoverish the nation?

1) Reporting on disasters is fun!

2) Their ratings are terrific—and, of course, they’re still being paid.

I thought Trump was the authoritarian! [Hey, that's not a question!]

No, he’s the lazy, narcissistic blowhard. Liberals are the authoritarians.

The shutdown is airport security for the whole country. Nineteen Muslim immigrants flew planes into the World Trade Center and the Pentagon, and suddenly little old ladies from Oklahoma had to be goosed at airports. We have to be safe!

A horrible Chinese virus sweeps the planet, which is devastating to older people but virtually harmless to the young—and the entire country has to be shut down. We have to be safe!

Yep, and a majority of Americans is falling for that again, 2nd time this month century!

Whether it’s rational or not, people aren’t going to go out like they used to. [Hey, that's also not a question!]

My entire life, liberals have said, “Don’t like abortion? Don’t have one.” “Don’t like pornography? Don’t look at it.” And so on.

There are the usual italics that I can't put here, as the excerpt is already italicized, and VDare has loads of links on their presentation of this column, as usual.

There are a few parts Miss Coulter had in this one that I don't agree with, hence that lower than normal score. Next, a nice segment by John Derbyshire in his transcript of his weekly "Radio Derb" podcast.


* "Shop", haha, this comes from my reading of a Pat Buchanan book, using this terminology for groups of advisors - he was a wonk way back in the day ... Yeah, a review or two is coming.

Moderator
PS: Yes, Hail, I did some of that (changing the post number). The site works as it should when the index.php is loaded, not the blogworks.php one. The way to fix that is obvious to me, but I really want to wait until after this Kung Flu deal is over (other than the economic depression(?)) to do a one or 2 week revamp of the whole thing. It's not that I can't work on it separately in my "sandbox", but just don't have time to both write and program.

With anything but an integer post number, the home page should load, which, of course, doesn't have the comment-entry section. Any post number for which there is no page will got also to the home page. Having the blogspot.php file in the URL first of all, shows the page without the header (which "open in new tab/window" does too, unfortunately). Also, it does gets one to the current or a nonexistent post, with the comment-entry section.

Now, you seem very good with this stuff, so you've probably already got the answer to your question. I did see you changed the link to here once, to the way that displays the page better, but just to make sure:

Thanks again for all your help, Hail.
Hail
PS --
I see that anything works,

All deliver the most recent post (right now NYC nurse on Corona), but with the phantom comment section.

The digits of pi, though, do not deliver the first post:

Here is what I get for that last one:

Comments:
No comments."
Hail
PS -- No problem and no I didn't originally screenshot it but did so after finding it again. I found it by manually inputting the "0" in [NUMBER] in this URL:

which is otherwise away to get access to any post if you know the number. I think the way this all happened was I had checked a link to the "1399" post (My "anti-CoronaPanic" Unz comment, originally written March 26, which you re-published) and instead of correctly going there, it went to the Ann Coulter (current) post, and I saw this guy giving a "no PS" comment and reacted to that.

What's the best, most reliable way to link to individual posts at Peak Stupidity?
Moderator
PS: Hail, that was very on-the-ball of you to save that URL (or was it from you history?). I don't know how the guy's spam-comment got in under post 0 to begin with. I mean, I know you can do it, as you and I (just now) did, but why he or the bot would have gotten to that one.

Yeah, that's a bug. I think you could do that for future posts too. (Maybe I shouldn't have written this, here, but bots can't read this stuff - will delete this part tomorrow after you acknowledge.). I'll go test that, because if you can make a comment for a post ahead of time, that could get goofy.

Thanks very much for your help with this, Hail.
Hail
PS --
RE: "Could you let me know what post you tried to comment under? Also, if you can remember the other commenter's handle or something he said, let me know."

I don't know how I originally got to it, and couldn't find it again at first but your mention of "post 0" allowed me to find it. Screenshot here:

It must be that "post 0" defaults to the most recent. I wonder if others manually plug in "post 0" if they would see the same paralle-universe comment section? How did Johnc772Friday get there in 2017?

(p.s., What are the odds Johnc772Friday was a real person and not a spam-bot?)
Moderator
PS: Mr. Hail, re your 1st comment: You and I are both pretty heavy users of the unz site*. There are so many smart commenters, esp. under iSteve that write very well, and we are both seeing this unusual divide on there. Of course, there are pundits around the web (ex, your Hunter Wallace case) that we can see split on this Kung Flu panic/anti-panic line too.

I try to think of the meat-space world, the people in my neighborhood, my family (GREAT example!) and such also, and why there's such a difference of opinion. I work with people who tend to be conservative, but some more on the authoritarian side (and you know which way they tend to lean).

This would make for a very good post, not so much in your vein, discussing the pundit world, but more about the general population, at least in my world.

I agree with you that Libertarian/Authoritarian divide as part of it, yes.

About Ron Unz: That's why I should have shut my mouth, even though I give (and gave in a comment yesterday) big kudos for Mr. Unz for being a true freedom of speech stalwart.

Let me know. I need to know this stuff.
Moderator
PS: True that about Miss Coulter (notice the "Miss"), Mr. Blanc. She deals with poltics and economics, but not so much in the realm of social issues that have to do with family formation, etc, as iSteve does. If she'd at least encourage white fertility with her writing, that'd be a good help, as she has many millions of readers.

She'd probably say that Libertarian policies encourage it on their own, and I'd tend to agree, depending very much on your or my definition of "Libertarian policies".
Moderator
PS: Mr. Hail, yes it's very weird, as those 2 comments that had the "YOUR NAME" field as "Hail" were for a post number 0, which is not one, basicallly. That PS thing started in Oct of '17, when I started getting spammed with 1,000s a day. Could you let me know what post you tried to comment under? Also, if you can remember the other commenter's handle or something he said, let me know.

No, I've never seen this ever. Though the formatting and usablility here isn't near the best, I haven's seen many bugs, because it's very simple. Typo's, now that's another story! ;-}
Hail
PS -- There was some kind of commenting error but not sure what time. What I saw was a comment by somebody who left a comment without using "PS," and I tried to commented on that (something like, If the thin blue "PS" line gone, anything goes). Then I noticed the comment was from June 2017, which predates the post by almost three years. It must've been a comment-system bug. Have you ever seen something like that before?
MBlanc46
PS Great polemicist, that Miss C. However, what has she done for the white fertility rate? By the way, pro editorial tip: When you want italics in an already italicized block of text, use roman. SOP.
Moderator
PS: I'll write more of a reply later on, Hail. I'm just wondering if it was you that had an error commenting a couple of times just before midnight GMT yesterday. Could you give me vague details (haha) if it was?
Hail
PS....."The shutdown is airport security for the whole country."

"Miss Coulter has definitely been on the anti-panic side of the Kung Flu Gap."

Someone should be keeping a running tally of who is in the Pro-Panic camp and who is in Anti-Panic camp.

There are surprises every which way for how people have sorted themselves. Not sure how familiar you are with some figures of the dissident-Left like Amy Goodman ("Democracy Now") and Consortium News, but both have been Pro-Panic. As for the big-hitters at Unz, obviously they were all pro-Panic, which created the first ever "commenter revolt" at UR that I have seen.

Lesser men than Ron Unz (who at least appears emotionally committed to the pro-Panic side) would have handed out a wave of bannings against anti-Panic people, like he did with the MikeatMikedotMike suspension, which he seems to have son thereafter lifted.

I think one of the dividing lines may be where you fall on the Pro/Anti Panic continuum is where you are on the libertarian. That is one of my latest ideas anyway.