Whoa, this sounds like a post from your expert financial advisor, the whiz kid with the 2nd house in the mountains of Chile, who come to think of it, hasn't been reachable at his first house since, crap, maybe 2 months! No, this is just a short continuation from the thoughts on the insidiously evil scheme of income tax withholding from ~ a week back in this post. 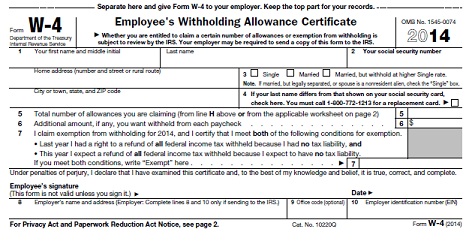 At the very end of that post I mentioned the lack of leverage on the part of the taxpayer that has been another result, intended or not, from the change to one's writing a large check each April 15th versus having the money drained nice and slowly, and quietly. The change was 77 years back, so it's not like anyone under 100 y/o would know any other way.

Quite a few years back the IRS sent me a letter saying I owed something in the neighborhood of $500 from an error in my return. Due to my not-so-hot financial situation that year and a few prior and not insignificant inflation since, that was like $10,000 for me today. It was not at all clear to me what the discrepancy was about. I did my due diligence, staying on hold for 1/2 an hour, getting told to call back, and trying again a couple of times (as I just wrote earlier today, I don't give out my phone number). The matter was not settled, and that was just fine with me, because I couldn't just spare the 500 dollars.

The next year was a welcome change, with a new job with good pay, so I was even in a not particularly bad mood doing the forms that year. Due to all that withholding, the Feral Gov. owed me something just over $1000. A month or so later, here comes that nice check... for ~ $500. WTF!! Yeah, they pilfered the money from that discrepancy right out of it. That was it! No more refunds, if I can help it.

Now let me digress on that refund thing. People with poor financial management skills seem to treat the tax withholding system as a non-impulsively-drainable savings account. They can't seem to keep money in the savings account, as sudden expenses, such as granite countertops, shiny rims, and things like that keep coming up out of nowhere! The withholding program lets them participate in a forced savings account with what's always somehow a nice surprise from Uncle Sugar in May or June, unless they pay an extra $300 to get it in January. This has the effect of making the Fed-Gov the nice guy too.

I'd always ask people why they wanted to give that interest money to the government after complaining about how much it was already taking. Ooops, I'm thinking of over 15 years ago, when real interest was a thing. Nowadays, it's not a factor.

The leverage factor was something I learned after that unresolved $500 discrepancy fiasco. I try to work it out where I owe the Feds a little, but in the year 2019 it worked out to a lot. Got a discrepancy, IRS, well, you'll just have to get ahold of me somehow. Don't call, as that's really disturbing, plus you can't. You don't have my email. Just send a nice letter - be nice, now - and I'll get back to YOU.

Imagine if we had the leverage due to owing 15 large in mid-April each year. Would the IRS really be hauling millions of people to Leavenworth, or would they be such a nice organization, that the headquarters would have to be located in Minnesota, dontcha' know?*

I think “rule of law” has always been an illusion, mostly.
A thing afforded only to the wealthy and the connected.

I think trusts are relatively safe, so far, because most people do not enjoy the advantage they provide and those who do are from a special protected class. (The ownership class.) I don't know of a better, safer way to hold land title in this country at this time except for allodial title which is out of reach for most people in most places. Well, seems like a 501c3 non-profit church is a good way to hold land title and more easily accomplished. Property tax exempt too...

But I agree with what you're saying. When the ship of state is a pirate ship, and the people at the helm are pirates, is there really any “rule of law”? Incidentally U.S. foreign and domestic policy makes a lot more sense to me when I think of the pirate analogy. Please understand that I don't mean to slander pirates in such a way. I think emperors and bureaucrats are far more dangerous and deadly than pirates.

I also agree that it is better to keep assets out of their system completely. It's great having friends you can trust, especially with valuable assets. We need local community and like minded people we can trust now more than ever.

Unfortunately for the buried metals plan, there are these things called metal detectors.
Sometimes brass and lead are more valuable than gold and silver.
Moderator
PS: Anyway, Adam, I don't meant to say that's not very good advice. I have a post coming that just occurred to me after opening up the power bill. They are waiving late fees, etc. for people that are having problems. OK, fine for now, but when will it come to just writing off up to $500 or something, and getting bailed out for all that by the gover.. uhh, me and you.

I just hesitate to be straight up anymore with big organizations, as I really hate being the sucker. School loans are a good example of that for the young people.
Moderator
PS: Mr. Smith, you definitely know more about that financial business than I do. I've heard of trusts, of course, but all that still depends kind of on how the rule of law really holds up. I suppose you could say then, that anything but well-hidden precious metals has a risk if the SHTF and the result is a lawless regime and lawless society.

It's good to have people you can truly trust, if nothing else, for married men in bad family situations. I've written about this once or twice, I think: Sometimes one needs to just keep everything out of the legal system completely, and (temporarily, till the heat's off) gift some valuable items to those trusted friends. ("Hey, I don't have it. What can I tell you? It's GONE." What's the judge supposed to do?

All this talk of mine is just at a more basic, don't-give-a-damn level, though.
MBlanc46
PS “Fargo”: Best movie ever. Re socialism: There’s socialism and there’s socialism. Socialism is historically associated with the state. Bad outcomes. Sometimes very bad outcomes. What we need is free-enterprise socialism.
Adam Smith
PS:Hey Mr. Moderator,

About that giving away stuff over and under the table...
This works fine for many things of lesser value or of great value that are otherwise untraceable or unregistered.

I'm a firm believer in NOT "owning" anything. All property of value should be held in an irrevocable trust or perhaps a llc or foundation. Land, house, business, bank accounts, brokerage accounts... None of this should be "owned" by a human. A human might go out into the world and make a mistake that can cause a liability putting those assets at risk of seizure.

Cars should be held by a separate entity from your valuable assets, as they are the one thing most likely to cause liability. You can keep them in your name if you structure yourself judgement proof.

All assets can be conveyed into an irrevocable trust. This way assets can be held safely, and passed at death without probate or taxes. It takes a little bit of forethought to set it up right, but it is totally the way to go. Done properly there is nothing that changes hands upon your death. The trust lives on with all assets intact, to be used and enjoyed by your beneficiaries, with a new successor trustee.
Ganderson
PS 4 kids in my family, my brother and one of my sisters, who both live in St. Paul, have the accent, my other sister and I don’t. I can put it on pretty well though.

How come, when the varsity blues scandal was current no paper that I am aware of ran this headline over the picture of William H. Macy and his wife coming out of the courthouse “ I’M COOPERATING HERE”. And, I know the guy who owns the woodchipper!

I like Arlo ok, you kinda have to if you live in Western Mass. Never met him, but have met his mom. Mrs. Ganderson has Huntington’s disease in the family, (she’s not at risk) and Marjorie Guthrie was very involved in the national HD association. Have a good Sunday all you Peak Stupids!
Moderator
PS: Mr. Blanc, one way to win is to put them off for a few years, while giving away stuff over and under the table to all your loved ones and trusted friends and then dying before they can come get you. Now, that's #WINNING, I think ...

Now, I don't know if the Dissident Right is always so anti-Commie. Some of them think Socialism is what we need. I, needless to say but I just did, disagree wholeheartedly.
Moderator
PS: To me, the best job at (over?)doing that northern midwest accent is in the movie "Fargo". Man, I thought the movie was damn funny the 1st time, and it was mostly because of the accents. Everyone is just TOO DAMN CALM for me!

Haha on the "Chinatown" reference!
MBlanc46
PS I don’t know whether withholding is any better or worse than having to make quarterly estimated payments. I’ve been doing the latter since 1995. I have no choice since many of my clients are individuals, not businesses. Now that Mme is retired we have nothing withheld, except last year Mme pulled off one of her tycoon transactions and figured she’d better pay some to the tax man right away or our bill would be excessive in April (now July). They’re going to get you one way or the other, and there’s no way that they’re going to let you have any leverage over them. The only way for us to win would be to abolish the income tax.

Ganderson: You’re not the only one who was practically a communist (lower case) back in the 1970s. You might as well delete the “practically”. Even today, I suspect that my views on private property in the means of production would be seen as dodgy, or very dodgy, on the dissident Right.
Ganderson
PS Yah, you betcha, donchaknow!

I actually don’t have much of an accent, never did, but i am “Minnesota Nice”. At least that’s what all the girls down at the bowling alley used to say.

I’m one of those who did not get the fiscal responsibility gene, and when I was in college I’d use my tax refund for 3rd quarter tuition. I fully realized I was giving the Feds a interest free loan, but I had enough self knowledge to know that if I didn’t do it that way I’d have no money to shovel at the U of M

Now granted I was practically a communist back then, so my attitudes toward taxes and stuff were a bit different. Forget it, Jake, it was the ‘70s.