Whew, glad it's only once a decade! 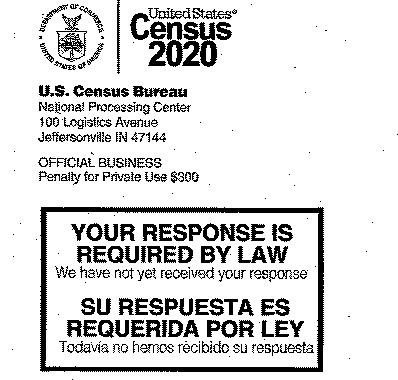 I know, I know, Article I, Section II, but what's the SPIRIT of the law?


A month back Peak Stupidity bored our readers with two posts (here's the 2nd) regarding our intentions to make a firm stand, again, like every decade, on the privacy issues regarding the US Census. As commenter MBlanc46 has rightly pointed out, no, this is not the hill to die on. I've also heard this, regarding another anti-Police State minor issue from a kid 1/2 my age (and that was a long time ago!) at the grocery store - You need to know how to pick your battles.

By the end of this post, I doubt I'll have convinced anyone of why I need to screw with the census people. Maybe it's just kind of sentimental thing for me, as I can remember telling them to piss off on the this a number of times. It seems like it was just 10 years ago, but it had to be 20, when the nice guy came around in person. He was not the AA-hire type that was bound to get offended by anything I did out of the ordinary because of "more work". No, he was a 30-something white guy who was very pleasant. Once he got beyond my telling him how many people dwelled in this particular abode, I had to stop him right away: "No, I've read the Constitution. This census if for counting Americans for voting purposes. That's all you need to know, one guy and one cat." He may have even had respect for that attitude, as we parted quickly on good terms, and none of this "get off my lawn!" stuff was necessary.

OK, I have been told by commenter Rex Little under the 2nd of those previous posts that the on-line deal was pretty quick. I believe you guys. It's just that my position as a Peak Stupidity blogger makes me an essential worker, IMHO. This is an essential battle, fighting the essentially stupid things like this Kung Flu Infotainment Panic-Fest along with existential issues like the immigration invasion (different word - you may need to grow a goatee to understand it). In current-era terminology, one might say that this blogger is a Stupidity First Responder. I'm not sure I would have had the time for this... interferes with writing this post. ;-}

I do also know that all, yeah, this invasion of privacy in the extended census form* is just plain peanuts. Compared to smart-phone data espionage, this is true. Even compared to the information the US Feral Gov't ADMITS to having, the tax/employment info, this is peanuts. I just think of the SPIRIT of the law in Article I (legislative branch, Section II, with the wording "", that is used to justify anything. The point is simply to enumerate the people for the apportionment of representation. (There, I should have said THAT to the Census guy 2 decades ago - much more professional.) The "... insuch manner as they shall by Law direct..." language does not give carte blanche for violations of Amendment IV, so screw 'em.

So what'd I do this year? Here:


Yes, we have [REDACTED] people, and no, no one else lives here besides us [REDACTED]. That's it. 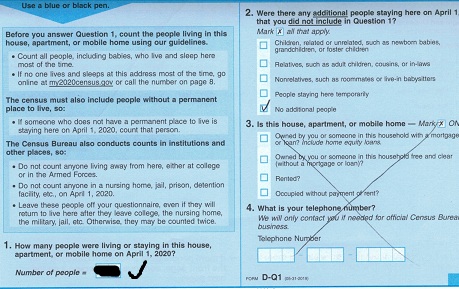 Oh, believe you me, I'd already printed up a quick note explaining the spirit of the text of Article I, Section II, including my refutation of Morales vs. Daley (coincidently, settled right at the time of that 2000 census), with the phrasing "SCROTUS has made his ruling, now let him enforce it." Yeah, having a little fun is good, but I can see some clerk at the data input facility throwing it straight into the round file, or maybe some bureaucrat bringing it up to his boss, who gets pissed at the trouble and writes in to the IRS or something. Nah, I left the note out and answered the 2 questions that comply with this enumeration, with the rest of it X'd out, explaining "X = NOYB".

The Census invasion of privacy** is just a pebble on the rocky road of stupidity, but it's nice to let someone know that, if we are not complying here, there may be a lot more we won't comply with. Hey, it's just whom I am, man.

PS: Oh, yeah, the SCROTUS also ruled last summer against the Trump administration plans to add a citizenship question.*** I'd have answered that one, but it's not required either in the enumeration language. All the rest of that 8 pages is, though.

* There used to be what was called the "long form" version, only for a portion of citizens, as more of a survey. I never got one. I should say, one never stayed on my desk long enough to fill out, at least.

** I do what I can - the IRS, for example, does not know our phone numbers, email addresses, or any way to contact me other than a plain old letter in the mail. That's the way I like it.

*** They gave the Administration a deadline to come up with further arguments, though, but you know President Trump had likely forgotten about the whole thing. It's a done deal now. Dang, I should have checked for that question. Can anybody here let me know in comments? (I could not a find positive answer on-line, but it all leaned toward naaah.

“You don't need to know” is a good policy when dealing with many people, especially bureaucrats.
It takes a bit of diligence to maintain privacy in this day and age.
It helps if you can keep your information out of as many databases as possible.

Speaking of databases...
Google Books has previews of those Fogel books. Some pages are missing, because it is just a preview, but there is quite a bit there.

Moderator
PS: Mr. Hail, I never was that interested in genealogy, but I that kind of historical work from primary sources is pretty cool, anyway. Yeah, that's a shame about that fire. Nobody wanted to copy over numbers for weeks on end, I guess, to make a back-up. They did have cameras back then, now that I'm thinking of ways they could have backed that up, but I think photos were very expensive.
Moderator
PS: Mr. Blanc, thanks for the information on the author and those 2 books. Mr. Fogel might have been "safe" up through now, but from what I read from Steve Sailer regularly, nobody is safe forever, even people who got that prize from Sweden. Maybe they'll have it stripped from him, including taking the medal (if there is one) and melting it down to add to the reparations fund.
Moderator
PS: Mr. Anon, I hadn't even thought of that. "Working from home, yeah that's the ticket..." So, nobody would have come around for a long time from now. Anyway they got what they need, because "you can't always get what you want."
MBlanc46
PS Time on the Cross, 1974. Very unpopular with Goodthinkers because it established, with hard data, the the daily lives of black slaves in the South were comparable to those of so-called “free labor” in the North. There’s some heavy-duty statistical analysis in the appendixes. It’s a must read for anyone who wants to engage anti-whites on the slavery issue (I don’t, but someone should). Fogel’s second book, c. 1990, titled something like Without Consent or Contract, is a more popular treatment of the same themes. It didn’t damage Fogel’s career too badly, because he was awarded one of those Swedish economics prizes in honor of Alfred Nobel and he’s considered the founder of cliometrics (statistical history). The 1850 census must have asked for a lot of information, because TotC refers to it quite a bit.
Mr. Anon
PS "Whew, glad it's only once a decade!"

The entirety of the 1890 census was lost in a fire in the 1920s, in some warehouse in Washington DC. You'd think they'd have had a second set of copies for safekeeping, but they didn't. A total loss.
Hail
PS ---

I have long done genealogy as a hobby. Unusually I enjoy this even for people unrelated to me.

The old censuses are worth their weight in gold in many cases, for genealogy researchers. Genealogy and History (re MBlanc46's comment) do tend to overlap quite a bit.

I can say this from my experience, in long hours of genealogy research: There is nothing worse than someone who was 'missed' on a census; often times they are the only surviving signposts for where a person was, who was related to whom, what was going on.
Moderator
PS: Now there's another book I'm on the hook with, assuming the libraries (that "we" just passed an 80 million dollar bond issue for) will open up again at some point.

Did they ask a lot of question in 1850, Mr. Blanc, or just race, sex, and that?
Moderator
PS: Excellent comment, Adam! I liked that part about "Are they going to break in my house...."

Yeah, "you don't need to know that" is not just a good statement for people with extra-top-secret security clearances. I use it, if not aloud, in my head, for Census forms, pizza parlor hostesses, auto part store cashiers, the insurance company... you name it.
MBlanc46
PS I ignored the 1990 form. Since then, I’ve let Mme B deal with it. She’s a Goody Two Shoes, so I’m sure that she dots every i and crosses every t. I am of two minds about providing data to the Feds. On the one hand, it’s none of their g-d business. On the other hand, it’s a treasure trove for historians. Much of the data in Fogel and Engermann’s book on slavery (the one rational book on the subject [actually, two, as Fogel wrote a second book later]) came from the 1850 census. So there’s that. I suppose that you could say that the USA is now finished, so bugger the future historians. Like I say, I’m of two minds about it.
Adam Smith
PS:I got one of those long forms a couple few years back.

Here is this years...

It asks all kinds of questions about sources of income.
It's none of their business.

WTF? Are they going to break in my house while I'm away at work?

Needless to say I did not answer. So they sent a guy to the house three separate times. Never talked to him.

I don't do business with criminals.