Hate the Bat, not the Chinaman 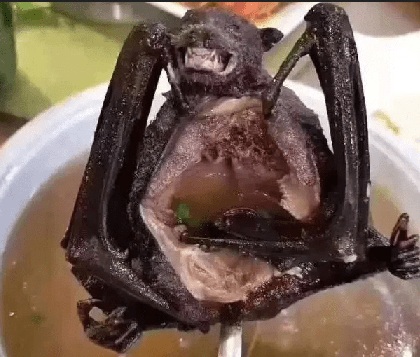 This post is and addition to, and possibly somewhat of a correction of, the Peak Stupidity post America v. China written a couple of weeks back. The gist of it was that China and America have our real differences, that need to be fixed by our own countries, but this Kung Flu is not a reason for our relations to be strained further.

I could talk to a hundred Americans, and, other than an occasional conspiracy theorist outlier (and there is much of that in China too), I doubt 2 of them would really be of the opinion that we should be angry at China because of the Kung Flu. This includes both sides of the panicked/un-panicked divide, as we, for lack of anything better yet, dubbed the Kung Flu gap.

This virus came from China, like a number of them have in the past. If hadn't been for this greatly-over-the-top Infotainment Panic-Fest as a reaction, we'd likely see this the same way: "Yeah, they eat some weird shit over there in the Orient, especially the southeast of China. Some places are extremely crowded and messy. They shouldn't be running virus labs without Western-style quality control." "However, let's live and let live. They live in that way OVER THERE. We live differently (and better, in this sense) OVER HERE. East is East, and West is West, Rudyard Kipling and all that ..." That's why we have separate countries.

Well, we're not that separate when we have mass immigration by the millions and Globalism has people of both our countries flying back and forth like mad, with no serious restrictions or border control. Now, that's something to be mad about, but that anger shouldn't be directed particularly at the Chinese.

Judging by a couple of pundits, one being our number one favorite here, it is not wrong to blame the Chinese directly, though, or at least the Chinese government. Takimag writer David Cole, one whose writing there hits the bullseye much of the time*, says Speak the Truth, Shame the Chinese. This article**, based on Mr. Cole's opinion that the wild-animal "wet markets" are undoubtably the cause of the Kung Flu and also the preceding SARS virus out of the same region, is mostly about the efforts to get these markets shut down. They should have learned from the past cases, in the early 00s, as organizations around the world pressured the Chinese Central Government to shut these down.

The Chinese government is powerful in some ways, but if the people wanted to have easy access to cats, rats, bats, and all manner of creatures, cuisine-wise, who are they to say otherwise? In other words, they supported the Chinese people, future health crises be damned. Possibly, they knew they can only order the Chinese people around so much without expecting too much trouble. David Cole's argument that fingers should be pointed at China for this is pretty sound.

Secondly, we doubt we'd find any argument with Ann Coulter and were not disappointed in her week-ago column The Bill For Globalism Has Arrived. Tell China To Pay It!. Miss Coulter rails on the Globalism that is a big cause of the Kung Flu being of any consequence in America, but also at all the other ills of Globalism that have badly hurt our economy. Back to China, as usual, I can't help excerpting some Ann Coulter***:

His [President Trump's] one slight annoyance with China is that it lied about the Wuhan virus, allowing the disease to explode across the globe.

I have a longer list of complaints, beginning with the fact that they eat bats. The resulting pandemic now raging through our country would be bad enough, but our new crisis is a shortage of medical equipment.

Too bad we shipped all our manufacturing to China! Not to worry, surely China wouldn’t disrupt the sacred “global supply chain.”

And there’s more good news! China makes more than 90% of our antibiotics, vitamin C, ibuprofen and hydrocortisone, 70% of acetaminophen, and 40% to 45% of heparin, according to The New York Times. The last American penicillin plant closed more than 15 years ago.

In early March, the Chinese government ominously warned that if China stopped exporting drugs, “the United States would sink into the hell of a novel coronavirus epidemic.”

(There are loads of links in the original, as per VDare style.) After all this, Miss Coulter puts the rest of the blame back where it belongs, much of it on Wall Street and its destruction of American manufacturing might.

Then, there's Tucker. Peak Stupidity has written much in praise of the words out of Tucker Carlson, but, from what I've read, it sounds like he has gone all-out anti-China. That's too bad.

So,yeah, OK, there ARE people blaming China, and they have some good arguments. However, it's more of a condemnation of their government and some cultural aspects of the Chinese. That does not equate to blaming Chinese individuals for the Kung Flu, especially those already here in America. That phony "racist" charge has been brought up just to continue the on-going cultural revolution (hey, where have I heard THAT before?) in America, blaming everything on the non-Globalist, normal white man.

As a personal anecdote on that last point, I talk to a lady often who is basically an American in attitude but came from China (the R.O.C. that is, Taiwan) long ago. She brought up that point, but only in pointing out that she'd not seen anyone act differently to her because she's Chinese and "they started this thing". I pointed out that even if she had had some people avoid her, it's not that they blame her and hate her for that. It's just that they might reckon that they'd have a higher chance of getting the Kung Flu from her. That's a reasonable bet to take, if you're playing the odds. It wouldn't be the case for this lady, as she's from Taiwan, not the mainland, hasn't gone there in a long time, and is American as anyone culturally, but how do THEY know that? That's not how odds work.


* My favorite there, behind Steve Sailer, is Jim Goad, whom Peak Stupidity has praised before. Here's more about Jim Goad's writing.

** Aha! It turns out David Cole has written a subsequent column on the origin of the Kung Flu, which I just found, titled Wuhan Derangement Syndrome. This one is in disagreement with Tucker Carlson.

*** This column is written in Ann Coulter's usual snarky style, which is always a hoot to read. There are plenty of digs at one of our favorite topics, the Cheap China-made crap. While in this footnote, I'd like to point out that Miss Coulter's columns both before and after this, are on the Kung Flu, and discuss the overkill reaction, and the Chinese connection again, respectively, and are quite in line with Peak Stupidity's view, as usual. See How Do We Flatten The Curve On Panic? and Who Brought The China Virus To America—And Who’s Dying From It?.

Moderator
PS: Thanks for the bat info, Adam. I've been a anti-battite my whole life. I'd rather only birds fly. It's the bats and the flying monkeys that give people the willies.

Seriously, I'm always glad to read your info. My in-laws have some Sugar Gliders. They have to stay in a cage but are cuddly too apparently.
Adam Smith
PS:Hey Moderator,

I saw the disclaimer at the end and I agree, bats do not make good pets but not because they are vampires, well not most of them anyway.

According to the description under the video...

This bat was not releasable due to injuries. He is in care with a vaccinated and licensed bat carer. This bat is not a pet. He was a baby hand raised for release, and became an education animal.

I don't know what his injuries are. I'm under the impression that their wings are fairly fragile. Perhaps it is something else. They are smart little creatures, with better eyesight than I imagined they would have.

Evidently they do form attachments with their caretakers...

Good shot with that roman candle...

Moderator
PS: Adam, I watched the cute bat (is a "Grey-Headed Flying-Fox", per the poster there, a bat or not?). Anyway, there's a warning at the end, and you know this cute furry guy will just grow up to hate white people and vant to suck their blood.

Lots of people think squirrels are cute too, but I see them as low-down bushy-tailed rats. See "Had it up to here with these messy, dirty rat bastard ..":

It's got the anecdote about us taking out a nest of em with a lucky shot from a Roman Candle.

Adam Smith
PS:Turns out bats are cute and cuddly.

Mark
PS Exactly. Ebola is the only other contagion not from China that you can recall.
Moderator
PS: Mark, thanks for writing in. Yes, the virae (?) come from them. Cut the travel out, whatever. I don't think they have a monopoly and contagion though. Ebola, anyone?
Moderator
PS: That last comment of mine was for Mr. Blanc.

Berncar, I started the 12 minute video and got interrupted by a phone call. I would like to see that documentary too. (Sometimes, someone posts these entire things on youtube, if he desires the exposure more than the money.)
Moderator
PS: I don't know what the hell the Chinese government is hell-bent on for sure, probably economic domination. They've never had a chance to go this far in their long history. With Chinese people spread all over the world and that economic might, I don't think they really need a military edge on anyone.

How about we have relations with the common sense that was present in diplomacy in the normal, sane times? We do what's good for America, for a change. They do what's good for China, as they always have been. Chinese people here must assimilate, meaning that we can't have these huge numbers (legal and illegal) coming in. It may be too late already. One could send green-card holders home - nothing says you can't do that.
BernCar
PS Forgot the URL. If you're interested:

https://www.youtube.com/watch?v=qEA5PIOe7mw&feature
BernCar
PS I have just seen a YouTube video, "American Factory: A Vision of Globalist HELL", by YouTuber called Way of the World. It is about a Netflix documentary (yes, I know), "American Factory", about a Chinese company that reopened a former GM plant in Dayton, OH and the resulting clash of cultures. Haven't seen the documentary yet, but the Way of the World info is enlightening and pertains to the discussion above.
Mark
PS Nope. They're awful. ALL the Virii come from them.
MBlanc46
PS I have no beef with Chinese people as such, but as long as they have a government hell-bent on world domination (or something quite like it), I think that we should minimize relations with them. To the extent that the elites in the US seek world domination (or something quite like it), I oppose them. China for the Chinese, America for (heritage) Americans.