As a break from Peak Stupidity's trashing of the Kung Flu Infotainment Panic-Fest, we will continue with this series. As quickly as my guts will digest and excrete the ruffage called Amendment XVI, I've got a feeling the end result of this Morning Constitutional will be a stopped-up toilet. 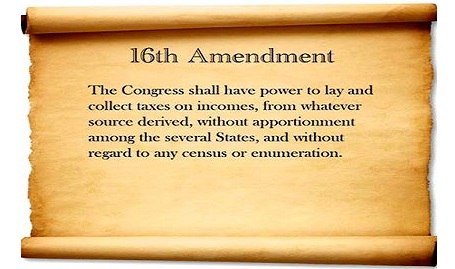 This will likely not be much of a spoiler for any regular readers, especially of the posts with the Liberty/Libertarianism topic key, but the 16th Amendment to the US Constitution was no local, but a GLOBAL MAXIMUM in stupidity. If one excludes the 10 Amendments of the Bill of Rights, ratified very early on to solidify the US Constitution as Law of the Land, then we don't see any kind of "Peak Constitutional Amendment" that comes near the peak set on December 15th of 1791. The series will continue, however, just with a lot less suspense ...

The Congress shall have power to lay and collect taxes on incomes, from whatever source derived, without apportionment among the several States, and without regard to any census or enumeration.

I was very hesitant to even start reading Constitution Center's interpretation page this time. However, without BS out of the affirmative action hires, seen the last few Amendments, the writing is very fair on this one. It's almost devoid of political opinion. Here's the background:

The Sixteenth Amendment, ratified in 1913, played a central role in building up the powerful American federal government of the twentieth century by making it possible to enact a modern, nationwide income tax. Before long, the income tax would become by far the federal government’s largest source of revenue.

Yep, it'd been tariffs and that kind of thing that supported a much smaller Federal Government right up until that time. I'll say this for the American people and politicians (there's some overlap there!) of this era, the 1890s to 1913: They at least made the effort to abide by the founding document of our country. Article 1, Section 8 states:

Additionally,in this same Article 1 on the powers of the Legislative Branch, (text from the Constitution Center):

Article I also provides (twice) that a “direct” tax must be apportioned among the states on the basis of population. This means that if a tax is a “direct” tax, a state with one-tenth of the national population must bear one-tenth of the total liability. It doesn’t matter whether one state has lots of whatever is being taxed (such as valuable land) and another state has very little—the states have to bear the burden according to population. That requirement makes direct taxation cumbersome, and often impossible.

Man, were those Founders wise men, or what?!

Thus, whether a tax is direct or indirect has mattered—a lot. So what is a “direct tax”? At a minimum, it includes “capitations” (specifically mentioned in the Constitution and generally understood to be lump-sum head taxes—each person pays the same) and also taxes on land. The Framers thought these were “direct.” But that may be it. An early Supreme Court case, Hylton v. United States (1796), approving an unapportioned tax on carriages, said as much, and in the nineteenth century the Supreme Court upheld several other kinds of unapportioned taxes against constitutional challenges. In Springer v. United States (1881), the Court even approved the unapportioned Civil War income tax.

At this time in history, near the end of the 19th Century, things had been going so well, liberty-wise. It's a damn shame that the American people dropped the ball, or at least caved in, to the big-money men. More history from the C-C site:

The world was soon turned upside down, however. In Pollock v. Farmers’ Loan & Trust Co. (1895), a badly divided Court struck down the 1894 income tax on the ground that it was direct but not apportioned.

Congress had enacted the 1894 tax as a reaction against the consumption taxes that had funded the federal government for most of its history. Consumption taxes overburdened lower-income persons. The income tax, in contrast, was structured to reach the wealthy, whose income came from investments. With Hylton and Springer on the books, almost no one thought the income tax was a “direct” tax that would need to be apportioned. Precedent aside, this would make no sense: if an income tax were apportioned among the states, a poor state with the same population as a rich state would need to bear the same total tax liability, which would mean tax rates in the poorer state would have to be higher than those in the richer state. Such a crazy tax would be a non-starter politically.

But, the Court in Pollock surprised everyone by concluding, in a 5-4 decision, that the income tax was a “direct” tax after all and, therefore, would have to be apportioned. The Court reasoned that taxing income from property was tantamount to taxing the property itself. The Court in this period was a conservative court, distrustful of what some Justices argued was an “attack upon capital”—an “arbitrary discrimination” between “those who receive an income of $4,000 and those who do not.”

4,000 bucks was a lot of money back then, obviously. (hmmmmm...) You go, Charles Pollock*, and nice work, SCROTUS-Chief Melville Fuller!

Pollock was met with popular outrage. The Populists and later the Progressives [here we go ...] put opposition to Pollock at the center of their political program. But how could they reverse it? Many argued that Pollock was so obviously wrong that a constitutional amendment was unnecessary: given a chance, the Court would admit error and overturn Pollock. But getting another case before the Court would have required Congress to enact a new unapportioned tax. That would have looked like an attack on the Court—not a good strategic move—and, anyway, who could be sure the Court would change its mind? Amending the Constitution was also risky, however. The amendment process is slow, and if the effort failed, an income tax would be delayed indefinitely.

... and it would have too, if it had been for you meddling "Progressives"!

It became clear that, if only for political reasons, an unapportioned income tax was impossible without an amendment. What form should it take? Some advocated repealing the direct-tax clauses, so that we’d never again have to ponder differences between direct and indirect taxes. But the resolution’s sponsor, Nebraska Senator Norris Brown chose instead to give Congress a new, clear power to enact “taxes on incomes”—without apportionment.

Norris Brown - now there's a name that ought to live in infamy and be made into pinatas on Cinco de Mayo, or better yet, Quince de Abril.

OK, well that was getting more into the history and area of liability for excerpting almost the whole article than I'd wanted to. This was supposed to be a RANT against Amendment XVI, but, don't worry, readers. That'll come in Part 2... gotta go, this Constitutional is taking effect...

Then, the world turned back upright again, in this historian's parlance, or as I'd put it, the SSHTF (no typo there - that is the Statist Shit Hit The Fan):

* Here are the simple facts from the court docket, but the wiki link above has more details: On the actual specific case that was in question:

In compliance with the Act, the New York-based Farmers' Loan & Trust Company announced to its shareholders that it would not only pay the tax but also provide, to the collector of internal revenue in the Department of the Treasury, the names of all people for whom the company was acting and thus were liable for being taxed under the Act.

Charles Pollock was a Massachusetts citizen who owned only ten shares of stock in the Farmers' Loan & Trust Company. He sued the company to prevent the company from paying the tax. He lost in the lower courts but finally appealed to the United States Supreme Court, which agreed to hear the case.

Arguing for Pollock was Joseph Hodges Choate, one of the most eminent Wall Street lawyers of his day.

Kudos to Mr. Choate too, who luckily had better things to do than chase ambulances, cause, well, could you even do that in the horse and buggy days? (It'd have been a sight to see, I tell ya'.)

MBlanc46
PS Yeah, that’s just the sort of thing that they’d do.
Moderator
PS: Agreed, Mr. Blanc - I do remember reading somewhere that during the drafting of this Amendment, it was brought up that there should be an upper limit on the tax rate, say ** 3% ** max.

"Oh no, that's silly", they were told, "This is only for the rich and you don't need to worry your pretty little heads about it." (Yes, I'm paraphrasing!)
MBlanc46
PS I simply can’t comprehend what induced our ancestors to vote for that.