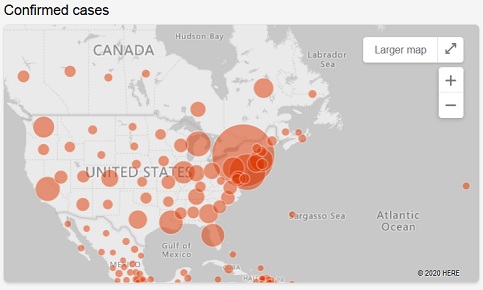 (I feel sorry for that poor bastard out there in the Wide Sargasso Sea - COVID-19's gotta be the least of his problems compared to flares, fishing line, and fresh water.)


Peak Stupidity has already ranted* on the so-convenient-as-to-almost-have-been-planned-out Socialist reaction of Americans and the governments at all levels to the Kung Flu panic. The divide regarding the proposed actions from the Feral Government pretty much all involve spending trillions of dollars. Any Libertarian thought on this seems a lost cause at this point. The question of how these trillions of fiat bucks will be spent divides along the usual political lines. Who will be "made whole", in the lawyers' terminology? Nobody will be made whole without a revolution, as the freedom our Founders bequeathed us is not coming back with those green checks in the mail.

What I want to mention today is that the amount of attention paid to this Kung Flu and the acceptance of the Police State reaction as prudent, seem to have been dividing us too. My family is a good example of that.

Where are we getting our widely-differing perspectives from? In my opinion, it’s a matter of time spent in from of the idiot plate, but, especially with the young people who don’t so much, but spent 10-25% of their waking hours looking at their little screens, the ease of keeping up with the numbers involved in this “horror” have them sucked in.**

This severe flu variant is the best thing that has happened to the Lyin’ Press and the whole infotainment-industrial-complex since OJ! This time it’s truly 24/7 for anyone who is addicted to news. Those, like myself, who think back to the previous 3 or 4 new virus strains out of E. Asia, and the normality of life with excess death rates of the same order-of-magnitude, and don’t spend so much time with the infotainment, have a much different attitude.

I am just so sick of hearing about this Kung Flu, not because I don’t want advice that I don’t like, but because it is being used to change the country. Every change that I’ve seen since the middle 1990s has been FOR THE WORSE, so that’s what I expect. If people calmed the hell down, and got their eyes, ears, and minds off this for good while, I think they would see things differently.

The particular family member in question, who has been keeping up incessantly with this infotainment panic-fest, is taking very serious precautions, most of it rightly, due to her job. The constant information flow is stressing her out to no end, and it kind of spreads throughout the family like some kind of, I dunno, virus or something, with a basic reproduction number, R0, in the 6 digits! Things have calmed down some this week, thankfully.

We are enjoying a long spell of beautiful weather. We've been doing homeschooling, going to the park daily for our 1 1/2 hour recess to throw the frisbee, "stay-at-home" order not-with-standing (Literally), eating healthy food, and seeing lots of people out in the neighborhood, plenty of whom we have not talked to ever before. Whatever happens to the economy, which is bound to be a change for the worse, this has been a golden time.

That is, if you can keep the worrying down. My wife showed me another story on her phone about a tragic Kung Flutality. A woman in New Jersey recovered nicely from the disease, but then gave it to her younger and healthy husband who died within a week. Sure that's sad. I asked her how many drunk-driving illegal alien Mexicans likely had plowed into families of 4 during this same week. I got no direct answer. Get outside if you can. Fresh air and vitamin D, bitchez!

* with a superb assist by E.F Hail.

** For an example, I bring up one of my favorite bloggers, Mr. Steve Sailer, an erudite guy with lots of common sense. If this were TEOTWAWKI due to this disease, I could see blogging 80% of posts about it as he does. It’s not! I could see doing a lot more blogging about the financial/economic fallout and what lies ahead due to this panic-fest, such as what blogger Audacious Epigone has done a few times already.

Moderator
PS: It's recess for us now, Mr. Blanc, because we want it to be, so we're headed out to the park. Enjoy the day!
MBlanc46
PS This self-semi-quarantine is beginning to really wear on the old nerves. I try to be a good boy and not make anyone else’s day any harder than it already is by getting stroppy, but everyone has a limit. That of the ghetto inhabitants has apparently already been surpassed. The rest of us aren’t too far behind. Our betters had better have a plan.
Moderator
PS: Also, Hail to you, I am coincidentally just reading your latest essay/post now. Thank you very much for the link back. It's unfortunate that it's about one in 2 times over 3 1/2 years and over 1400 posts that I got into a hostile discussion with a commenter.

There is a question there though from regular commenter Rex Little for which I deferred the answer to you. Perhaps you could answer there, but I can't guarantee Mr. Little will catch the answer (our software is low-functionality compared to unz.com)
Moderator
PS: Mr. Hail, thanks for writing back in.

The way you describe it is very much what I see in our little family divide. It's tough being right for 2 months against a lot of grief against someone who is damn near to High Anxiety (there's another 1970s movie for you!)

Should I say I told you so to a lot of people? I think I'd better, not just for my own satisfaction, but as a learning experience.
Hail
PS --- "Where are we getting our widely-differing perspectives from? In my opinion, it’s a matter of time spent in from of the idiot plate [and/or 'social media']"

As good a hypothesis as any. We are in new territory here.

Have you seen the '80s movie "They Live"? The blogger at the excellent blog Those Who Can See chose the name for her blog (I am pretty sure) from a central premise of "They Live." Two people see the same thing, but _what_ they see is totally different. The movie delivers the metaphor really well.

I have heard a few people by now say they had an experience of suddenly snapping out of CoronaMania, kind of like a central premise of that movie. I have also seen it happen with someone close to me.