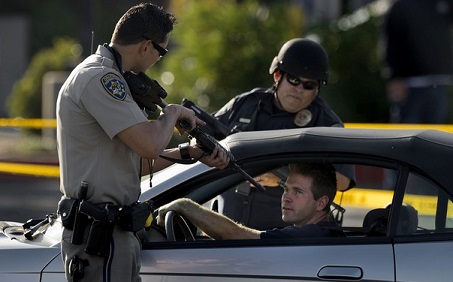 It was eerie driving through town at 5:30 this morning. I'm used to being able to hit mostly green lights when I occasionally need to go this early. However, normally there are still quite a few cars on the road at that hour, not enough to slow me down, but a fair share. Vehicles were sparse this morning. I can't recall if some of the lack of lighting is normal or due to closings of even normally-open gas stations. ("Yes, we are open 24 hours, Sir, but not in a row.")

Speaking of gas, it is as cheap as it's been nominally since a short period after the very large drop in the summer of 2008. In real dollars, it's probably the cheapest since before I was born, with sometime in 1998 being a close second.* With the roads wide open, especially the normally-clogged portions of Interstates that go through or around cites, and this cheap gas, is this not an ideal time for a road trip? Shake those Corona Blues, and hit the open road!

Back to this morning, I had a thought come to me: didn't my wife, and a friend too, say something about a curfew? I would think the hour of 5:30A would be included. It's not like anyone should pay attention to this stuff. In fact, the more people that don't, the better I feel about this country. Better yet, it'd be so great to have a population that would fight a ruling of this sort the legitimate way (I can dream...) As I wrote, the cars were sparse, but I wondered if the cops had thought about stopping people during a possible curfew time. It'd be a good excuse for revenue collection, as they're likely to find a violation somewhere (can't get the registration sticker for one vehicle as the county office is closed - more "working from home").

It'd be some serous Police State stuff though, getting stopped and asked to state your business. I don't think it would go to well either. I've been trying to go along and get along during traffic stops for years and amazingly have had a multi-year streak of not getting pulled over at all. In this case though, I'd have had to bring out my thoughts about this being some Nazi or Commie shit, and "how do you like being part of it?" Oh, and, as a friend who got pulled over the other day (yeah, he laid on the pedal of the Maserati, so 110 in a 60 or something) told the deputy when asked what he was doing, "I'm keeping my social distance". ;-} (Yeah, $350 and 6 points)

I am so blessed to have a phone that doesn't get any amber alerts, red alerts, Deep Purple alerts (latest concert information?), or anything else of the sort. I've tried to keep off the infotainment regarding this Kung Flu, so all I had to go by regarding this possible curfew is what my wife and a friend said. I'm not concerned. "Papers, please?"** "Nigga, puhlease ..."

PS: I checked later at my destination. Yes, there's a curfew through 6 A. It has an exception for those First Responders*** and, more broadly, anyone going to or from work. Does that not eliminate almost everyone now? Who's allowed to go to work?


* That link goes to the 2nd of a 2-part Peak Stupidity post on the history of gasoline prices in America. Here is Part 1. Note that in Peak Stupidity's 2nd part, the graph is in inflation-adjusted dollars.

*** Curmudgeonry regarding the "First Responders" is a series of 5 posts itself, so here: Firemen, Ambulance Drivers, Cops, and 9-11, the phone number

I enjoy your thoughtful, interesting writing.

I can tell by the way you use your words that you are tactful. As long as you're non-threatening, you probably will be fine.

It all depends on the individual cop though.
Some of them are ok. Decent people just trying to get by.

Others, not so much. There really are some bad apples.

It'd be more like: "Man, don't you think all this curfew business is kinda like Nazi or Commie stuff? Why do you want to be part of this... just askin'?"
Adam Smith
PS:Dear Mr. Moderator...

You said "I'd have had to bring out my thoughts about this being some Nazi or Commie shit..."

Don't call them nazi's while on the side of the road.

It's amazing how fast you'll see some real nazi shit if you do.

Have a nice afternoon.
Moderator
PS: I meant to get back to you, Robert. Yeah "early release" sounds like some kind of Freudian slip.

I've written about it before on this blog (I think), but one meeting with the school's attendance committee about our not following the protocol when our boy was sick for 3 days straight felt like a freakin' deposition. There were 2 people with laptops out and paperwork to be read and signed in front of them. First words out of my mouth: "Sooo, this is where my tax money's going."
Robert
PS: Thank you Hail, that is an important point. Language matters.

P.S. Our School District here has 'early release Fridays'.
Or did, back when they actually had school days.
Hail
PS --- "'Lockdown' is something you'd have only heard in Supermax prison till, what 10 years back? These trends are not good at all."

This has occurred to me too. This term "lockdown" is (was) not 'standard' English even as late as the 2000s, I think, at which time it would have been understood to refer to prisons forcing everyone in their cells indefinitely over bad behavior or whatever. Now, it seems it's become a global term with Global English types using it. It has been mainstreamed and standardized.

This is a point that deserves to not go unnoticed. A term with a traceable origin referring to prisons keeping their inmates in order has become standard in general use!

Ngram thinks the 'lockdown" inflection point, upward, is 1999. But reliable data only thru 2007.

I have a big paper dictionary "Random House Websters," published (it says) in April 2000, which is a clean twenty years ago. I looked up "lockdown." Here is what it says:

"Lockdown. n. the confining of prisoners to their cells, as following a riot or other disturbance. [1970-75]." End of entry.

Yes, the word's meaning has changed, broadened, been mainstreamed, been civilianized.

(This is the kind of case when having paper copies of things is helpful. You'd think "lockdown" was an old English word the way it is being used with such impunity today. No, we're not crazy. It is a new thing.)
Moderator
PS: That's a good one, Dtbb.
Dtbb
PS:My brother's job is considered "essential" and he has a kind of letter of marque from the legal department to show authorities if the need arises. Leaving his place the other night I invented a new farewell. "STAY ESSENTIAL". It might catch on.
Moderator
PS: Yeah, "lockdown" is something you''d have only heard in Supermax prison till, what 10 years back? These trends are not good at all.

We have a good NY style pizza place around. We usually go, or get it, about once a month. Your comment, Dtbb, is making me hungry! I hope they stay open for take-out. I have been stopped on the road near my place (not where I live now) for walking while dirty (almost like walking while black, but it was grease from the car I was working on.

As I wrote in this post -- https://www.peakstupidity.com/index.php?post=675 -- because the guy treated me like a human being, not a PERP, and wasn't into the "hut, hut" SWAT crap, we got along OK.
Moderator
PS: Yeah, sometimes a sense of humor helps, sometimes not, Mr. Blanc. My friend had a good one, but he's also not the type to sound subservient (if that's the word) in any way either, so maybe that came through. He used a driver's license from far away and is hoping the ticket, points-wise, will stay over there (I'd rather not explain exactly.)
Dtbb
PS:Florida started a lockdown yesterday at midnight. I went to pick up a pizza yesterday afternoon, and I have never seen so many cop cars on the road .I get the sense they are chomping at the bit
MBlanc46
PS I get it, the cops are supposed to enforce the law without partiality. (Of course, some are just punks or thugs.) But I would have thought that your friend’s very witty retort might have reduced his penalty to a finger wagging and a warning.