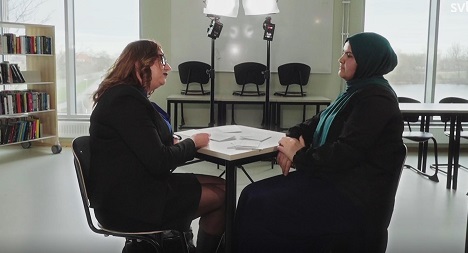 Just so the reader doesn't think Peak Stupidity is picking on poor downtrodden Sweden here, the immigration stupidity material in this post could just as well be about America. We find the stupidity, and we write about it, and this one is about Sweden. We've picked on Germany before, as Merkel's refugee stupidity has been an even larger deal, but it is in a country with 8 x as many people.

We've discussed assimilation or lack thereof into the Western world by modern-day foreigners before. It's one thing to make an effort to invite people who will have a hard time fitting in, and quite another to go as far as importing people from both sides (in near equal numbers, mind you) of a recent decade-long war involving millions dead and poison gas attacks. Peak Stupidity reported on that in Importing a Civil War, in Sweden this past summer. Yeah, in Stockholm, a city of 900,000, they've imported 16 1/2 thousand Iraqis and 11 1/2 thousand Iranians, or maybe the other way around, I dunno.

No, but, you know it's nice Liberal Socialist Sweden, and we will all get along nicely and sing Kumbaya by the camp fire car fires. Sure, we can bring them in, but there won't be violence because we don't ALLOW guns, and any poison gas will be confiscated, nicely, mind you, at customs.

Alright, that was the previous post, but this is kind of a fun one. In a debate, IN SWEDEN, on SWEDISH TV, about the recent welcome ban on the wearing of veils in schools, the two participants were MOSLEMS. Now, that's getting both sides of the picture, you know, from the 2 Swedes and all.

Russia Today* reports 'Don't like to see little girls in veils? Move out of Sweden': Muslim teacher & Muslim politician clash on live TV. Why don't you BOTH move the hell out of Sweden?! The story is just hilarious on the face of it. Of course any Swede who took the wrong side of this debate might have his career ruined, so I understand why they let the Moslems verbally duke it out.

The heated exchange between Naouel Aissaoui, a school teacher in the Swedish municipality of Skurup, and local politician Loubna Stensaker Goransson was over a ban on veils in public schools, which Goransson and other council officials enacted in December. The decision angered many educators, and Aissaoui is among those leading the pushback.

"Move away if it annoys you," Aissaoui said during a TV debate after her opponent said she disliked seeing little girls wearing the veil. "This is my country, too." [My bolded text was in italics in the article.]

Notice the names. The lady on the side against the veils has at least a Swedish name, though I do wonder if she is a descendant of the Vikings. The other lady is hard-core Moslem, obviously.

Now, one could see this whole thing optimistically. Miss Goransson, or probably Mrs. (can't seem to find out), has obviously assimilated enough to care about keeping Sweden Western to some degree, but not in the matter of religion. Assimilation doesn't usually entail a religious conversion, of course, but Islam is a whole 'nother game too.

Let's compare this to the assimilation of immigrants into America that DID happen with the first huge set of waves (mid 1880s to 1921). You had your Italians, your Irish, and your Eastern Europeans. The first 2 groups were Catholic, and the latter, if not Jewish, also likely Catholic. That was already a big change for the hugely Protestant country of the English, German, and Scandinavian settlers. It did take a while for people to accept them, especially because arrived in large initially-not-very-assimilable groups.

You skip to the 1980-1990's, and just for an example, think of a debate between Rudy Giuliani (of Italian ancestry) and Ed Koch (Jewish), an imaginary debate, mind you, as they were around politically in different decades. Almost nobody by this time thought of Mr. Giuliani as some Wop first, and Mr. Koch as just some Jew. They were both Americans, albeit with probably still a little tribal favoritism. OK, at least for New Yorkers, they were both New Yorkers. It took a long while and an immigration pause of over 40 years to get this point.

Sticking to America for a bit, we now have just as big a population of foreigners (people born elsewhere) as right at the peak last time in the 1920s. Hey, it's been 55 years now. Where's my moratorium.

For poor Sweden, these Moslem foreigners are so foreign to the old-timey Liberal Swedish way of life, that there's just no way it's gonna work. Sure, for Miss or Mrs. Goransson, maybe her grandchildren will be the Rudy Giuliani's, but how many have assimilated like her? There are lots more living in their own Moslem zones. Are those like the Italian neighborhoods of Vinny Corleone? Will all the Islam just merge into Swedish culture? How?

"This is my country, too" we hear from the unassimilable, veil-wearing 2-man pup tent on the right. No, this is not at all your country! Your country is well south of there.

Now, here comes some stupidity from the Russia Today writer:

[The SD's Sweden Democrats Party] suggestion to people not happy with the policy is remarkably similar to that of Aissaoui.

"If you find it so important to wear a headscarf, you go to Saudi Arabia or Iran. The police are happy to lend a hand if you forget that headscarf," said Lars Nystrom, a Skurup council member for the SDs.

Right on! But NO, his words are absolutely NOT "remarkable similar". Mr. Nystrom is Swedish and lives in Sweden. Miss Aissaoui is a hard-core Moslem living in Sweden. Get the difference, anonymous RT writer? I think Mr. Nystrom's people get to decide this shit. Perhaps the next Swedish TV debate could feature some Swedish people debating ... just a wild idea.

* Yes, it IS Bizzaro-World. Why do you ask? We get more truth from the Russian press than the American, as opposed to just 40 years back when the Russians would get their truth from the New York Times. OK, no, not the NY Times, but the Des Moines Register, Baltimore Sun, you name it.

Moderator
PS: "Courage." Now, that brings some flashbacks, Mr. Blanc - see https://www.peakstupidity.com/index.php?post=316 for more on this fellow who apparently was privy to "the frequency". As I recall, it was simply Channel 10.
Moderator
PS: Thanks for the info., Ganderson. Good on both parties in this respect, though something tells me that I'd be on the outs with most of the policies of any near-mainstream party like the SDs.
ganderson
PS Actually the Sweden Democrats, who for many years have been the gold standard for "hatefulness" and immigrant bashing (in other words, telling the truth) are being outflanked to the right by a new party AfS- Alternativ för Sverige sorta kinda based in AfD in Germany.
MBlanc46
PS It’s heartening to see a nationalist party emerging in Sweden. It’s probably too little, too late, but beacons of resistance are important, especially for younger guys who are going to have to be fighting for another fifty or sixty years. Courage!
Moderator
PS: Ganderson, we've been hearing that "not done enough" crap here too, for oh, 55 years or so, which is the entire civil rites era. If by "not doing enough", they mean enough incarceration, deportation, and tough love, then, agreed - we haven't done enough.
Moderator
PS: Yeah, Machine, this hypocrisy does not seem to hit these people very hard, for some reason. Were this debate on TV in most of the countries of origin of these new Swedes, it wouldn't be for long, as someone would come into the studio to take them away and flog them. Flogging is easier on you with a full Burkha, I can tell you that!

Yep, you can say nigga here. It seems like it just can't be said in "mixed company". It's tricky like that.
Ganderson
PS Government officials, the media, and academics in Sweden are all in on the “New Sweden”. I've had people tell me that the reason for all the rapes and “carbeques” is that Sweden hasn’t done enough. The friend that told me that recently moved from Malmö to Lund, because of the rise in crime in Malmö. It’s not Sven and Ole who are committing all the crimes.
Machine30
PS Hilarious side issue to consider. These two are broads, and the death culture they belong to doesn’t give a flying fuck what wominz have to say about ANYTHING, much less allow them to speak out. So they take their love of filth to a country that allows this preposterous “debate” to take place. White people have truly lost their minds, and being white, I think I’m allowed to say that (in much the same way the blacks are given unfettered use of the deadliest word EVER, “nigga”. Yes, I said it, but I’m a bit of a risk taker...