Peak Stupidity was going to drop any more coverage of this episode in media stupidity, but then Mr. Steve Sailer had to go ahead and read the NY Times again. 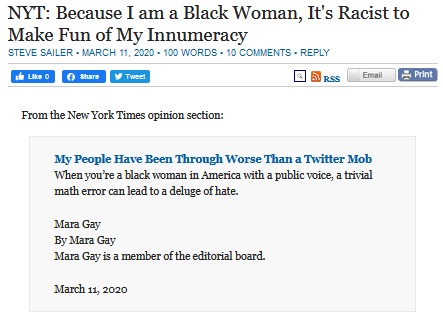 Yeah, it's been quite a while since we've been getting posts almost directly off of unz.com/Steve Sailer, but I reverted to it here by just showing iSteve's whole post. It's not like I'm going to run across editorials like this with my long-since elapsed never-ordered subscriptions to "The Times", The Atlantic, etc.

The originator of the 6 orders-of-magnitude stupidity at least went underground virtually. However,NY Times Editorial Board member Mara Gay* has decided to play the race card on this one, with an Editorial in, you guessed it, The NY Times. As the first comment under the iSteve thread, by one Pincher Martin, notes, there was a white man right next to her spouting the same stupidity with her.

However, Miss Gay makes it clear she'd never have been in such a high-level math class with her very title: "My People Have Been Through Worse ...". Indeed they are kept out of universities, expected to do rough manual labor, and are often priced out of the best real estate, to this very day!

She did mean high-school dropouts when she wrote “My People”, right?

* She should make enough money by now, I'd hope, to get that name changed at the courthouse. It's her business, but doesn't she get jokes like "My, yer gay!" at least occasionally? If not, something's wrong with people. Oops, per commenter BernCar's correction, the woman's name is Mara. So much for reading tweets carefully, huh? Maya worked for the joke, so it did make sense, and hell, it stands.

Moderator
PS: Oh, BC are you correcting me because I'm white? Are you saying a white guy often messes up those weird-ass names? Cause that's what I'm thinking, man ... that's like inverted-raciss or somthing. I'd tweet about it if I only could.
Moderator
PS: There was a professor at our school who was very bright but a little absent-mindedness came with it, as is usually the case. "Oh, we have a test today? Hmmm, OK, alright ..." and he'd turned to the blackboard and put 2 big problems up. I doubt they always worked out to have a closed-form answer. I never had the guy myself.

One thing about units, not the very-interesting dimensional-analysis stuff used for fluid flow (far as I know), but just simply units is this: You work the units with the numbers, all the way through! You multiply, divide them, and raise them to powers, just as with the numbers they go with. This way, if you find the units at the end are not those of the quantity you are supposed to be obtaining, you KNOW you are wrong. Now, if the units are right, that doesn't mean you are right and missed no steps or factors, either, but it just says the answer is not definitely wrong.

Thanks for the great comments, both of you.
BernCar
PS: Bill H., that story about your instructor saying the numbers don't matter in some calculations reminds me of a story traditionally told when science/engineering students are learning dimensional analysis. When details about the yield of the original atomic bomb test in 1945 were still closely held secrets, a British physicist examined photos published by the US Army in 1950. The photos had time stamps and distance scales and using those, G.I. Taylor was able to calculate to a surprising accuracy the energy released, which was embarrassing for the military. If you miss the good times you had at Nuclear Power School, Google "dimensional analysis and atomic bomb secret" for more info including YouTube videos. The great mathematician John von Neumann was another one for doing differential equations in his head. That's pretty damned impressive.

To our genial host: her name is Mara, not Maya. Sorry about that, but your joke was still good. Anyway, Miss Gay's promoting the math mistake, originally tweeted by someone else, was not, as she says, "trivial"; it was way worse than that. And to accuse her critics of racism was worse yet. I'm no stranger to creative alibis to excuse errors as my family will attest, but come on--racism?
Bill H
PS When I was in Nuclear Power School in the Navy, one of our instructors, in Thermodynamics, was a Lieutenant named Reikers. He probably had an IQ of around 200 or so, but he was a really nice guy and truly wanted us to understand what he was talking about. We didn't, of course, but...

He would set up a math problem on the chalk board to figure out how much power a certain nuclear reaction would generate, then he would cross out all the numbers and work the problem using the units of measure alone, telling us that, "The numbers don't matter." We would always applaud when he began an exercise in "math without numbers" and he would just smile and keep going.

Once in a while he would stop his lecture, politely ask us to excuse him, and scribble something on the chalk board. After talking to himself for a minute, he would erase his scribbling and continue with the lecture. I asked him about that after class one time and he admitted that lecturing kind of bored him so he worked differential equations in his head while he was lecturing. When he got to something he couldn't do in his head, he would pause the lecture to do it on the board. Shit, I could not work differential equations on paper and with an open book, and he was doing them in his head, while delivering a lecture.

Another teacher was a Torpedoman 1st Class, and he and I did not get along because I was an Electrician 1st Class. Not only do Torpedomen and Electricians in submarines not get along very well, but I had gotten my third chevron a little earlier than he'd gotten his and was therefor technically senior to him. The rest of the class enjoyed the situation more than I did.