Bernie Sanders expounds on the economics of the Marijuana Industry Monday night: 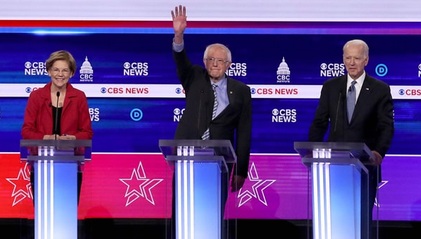 (No, sadly, the bare-breasted free milk brigade didn't make in to the Charleston event.)


I didn't watch the Blue-squad talk stupid to each other a couple of nights back, but I hear tell that old Socialist Bernie brought up the subject of drugs. Now, I could see Joe Biden being on something a lot more potent, but if one would expect any of these D-candidates to know about the pot, it'd be Bernie.

Mr. Sanders brought up the War on Drugs and his determination to terminate it, were he President. I It is the one thing we have left to agree on. That's his doing not mine, as he has flipped 180-degrees on the most important issues of guns and immigration, so to hell with him in general.

Anyway, I could see Bernie 30 years back being the exact type of pothead discussed in Peak Stupidity's Former Future Captains of the Hemp Industry. As we chatted by the bike path underneath the bridge, Mr. Sanders would have extolled the virtues of hemp and his plans to be a big player in the hemp industry, supplying rope and quality paper to the masses ... with 25% off discounts for potheads ...

Now Bernie Sanders suggests that those who have been on the losing end of the Drug War - no, not the drugs, they've been #Winning - those poor black people that have been railroaded* by the system - should be in key positions in this burgeoning Marijuana industry. You've got to keep in mind that free markets mean absolutely nothing to a Socialist. I'm not sure how Mr. Sanders intends to arrange exactly who should be Captains of this industry.

Perhaps he should look to the past, say 155 or so years back and further. It would take some study, and a repeal of Amendment XIV, but would his prospective Presidential Administration consider an ideal way to run the Marijuana business? He probably wouldn't want to use the word "slavery" or anything, but how 'bout "indentured weed-bondage"? Get those people who have been denied economic opportunities by Jim Crow, his brother Mo, and the whole Crow family at the DEA, back to work. Out in the fields, down in the basements of the Neo-Grow Houses, everywhere, opportunity awaits for a revival of the work ethic.

Bernie for Overseer of the peculiar institution where Mary Jane is King!

"Once you set foot on the Sanders plantation, son, you'd best set your ... mind to ... what was the last part?"

* I'll grant him that many of all races have been.

Moderator
PS: Mr. Blanc, I was under the impression that almost all of Bernie's generation indulged, but, yeah, a big head probably wouldn't have the motivation to get anywhere. Come to think of it, at 78 y/o now, his time at the university in Chicago (graduated in '64) was before before almost everyone was smoking it. OTOH, I don't know how one can keep in good standing in the Young People's Socialist League and the Congress of Racial Equality without, if not getting high, pretending, but not inhaling. ;-}
Moderator
PS: Bill, I think a commenter under an iSteve post had that video. I didn't want to take the time to "zoom in" on those few seconds of this 4-hour ordeal. Joe, was probably thinking "here's where I win", but the stupidity level in the Blue squad is so high that lots gets lost in the noise.

BTW, I don't think it's a bad thing for small business to be in the pot business, but of course, Bernie's solution will be to attempt this with government involvement. In a free market, the problem for his is that those poor minority entrepreneurs won't be able to make any more of a good business out of it than those old-timey future hemp CEOs.
MBlanc46
PS Didn’t know Sanders back in the sixties, so I can’t say for certain whether he was a head or not. In general, political types didn’t smoke, and heads didn’t get much involved in politics. So my guess is, no, Sanders didn’t get high.
Bill H
PS I almost had a stroke watching Joe Biden's face while Bernie was talking about supporting small business owners in the pot business in order to prevent major corporations from controlling the marijuana growing industry. I could see him thinking, "OMG, finally someone who is farther detached from reality than I am."