A Day in the Life of Ivan Denisovich - Book Review 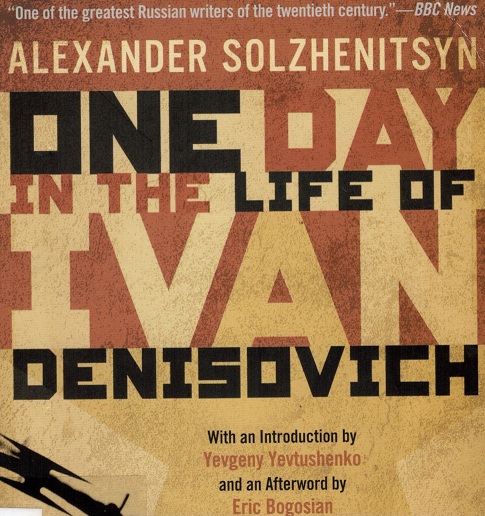 Commenter MBlanc46, under our post of Alexander Solzhenitsyn quotes about the Soviet Gulags, suggested his short book One Day in the Life of Ivan Denisovich as a good start in appreciating the works of this great author. Thank you, Mr. Blanc, done and done.

As the writer of the Afterword, one Eric Bogosian, says, this is not really a novel. The grueling day of bitter cold, work, avoidance of trouble and meager food, on what is considered a LUCKY DAY in the life of 10-year-term Gulag zek (prisoner) Shukhov* is more like a documentary to me, though Mr. Bogosian differs on that (the Foreword and Afterword are well worth reading). Mr. Solzhenitsyn published this book in 1960, during the long dark period of Josef's Stalin's long reign of terror over the Soviet people in Communist Russia.

It was a brave thing just to publish it. Keep in mind that what got men into the Gulag to begin with was any kind of mention of dissatisfaction with, or criticism of, the Communist system or authorities, with no due process, just a whisking away at any time to a life of hell without the heat part. There were millions of men in these Gulags, the work camp/prisons in Siberia, latitude in the 60s to 70s North, on the eastern end of the huge Eurasian land mass, making it a "Continental Climate", one of the most brutal climates shy of the Arctic/Antarctic. As someone who doesn't like the cold, the cold alone would make this a fearsome place.

It's a well-written story of that one day of a life in the Gulag. The basic theme is on the courage needed to survive. I'd heard that expression before, "courage to survive". Please read the book and imagine the struggle Mr. Shukhov would have to not just take out a guard and end all the suffering of every day for him, only broken by 7 hours of sleep and the cherished mealtimes of soup of uncertain consistency. As the story notes, it wouldn't take much out of the ordinary in any given day of the 10 year stretch to cause some official to up the term to 20.

Here and there, this book brings out some points that show a little bit of light in human nature. The first is the matter of the work of these prisoners. Firstly, Mr. Shukhov and his gang, including his savvy, loyal squad leader, have to scrounge up material to do their job, even at the risk of being punished for that. Getting away with dragging would have resulted in a lack of nourishment eventually, meaning death by some point in the brutal cold.

Just to keep warm as a starting reason, this group works quickly and efficiently in building a block wall for a power plant under extremely adverse conditions. By some point in the day's work the point becomes the individuals', including the narrator's, satisfaction of a job well done. That theme can also be seen in a scene in Cool Hand Luke (PS Review), and somewhat to that effect in a scene in The Shawshank Redemption.

Another neat vignette in this one day of Mr. Denisovich is one that lets us know that the power of the vile bureaucratic overseers of this work prison is not absolute, at least. At one point, one of the non-working supervisors finds out about some filtched material being used in the job. As he threatens to double the squad leaders' prison term, within the crew, the power of loyalty is shown, as a shovel is pulled out near to his head and he becomes aware of the limits of his power. This is probably the most uplifting scene in the story.

This is a well-written, easily/quickly read book, with a description of life in the Gulag that is fairly close to what I would have imagined. Those of us over an age in which we were well familiar with the Cold War and stories of life in the USSR and East Bloc perhaps have ideas about these terrible times already ingrained in us. It's why guys like me lose our humor when these young Communists of today come crawling out of the woodwork.

Hopefully I will get to the much longer and (I assume) more comprehensive Gulag Archipelago soon. In the most famous quote from that book, contained in the link up top, we should understand why Americans still gather together as they did in Richmond, Virginia last month. No, I doubt 5% of them have read either of these books. Many may know the quote. Many instinctively know the deal. We can't let this sort of thing happen. Keep your guns, and be ready to use them when it all comes down to that. It is not necessarily gonna be "different this time".

From the last page of One Day in the Life of Ivan Denisovich:

Shukhov went to sleep fully content. He'd had many strokes of luck that day: they hadn't put him in the cells; they hadn't sent his squad to the settlement [Working out in the open in the extreme cold]; he'd swiped a bowl of kasha at dinner; the squad leader had fixed the rates well; he'd build a wall and enjoyed doing it; he'd smuggled that bit of hacksaw blade through [Not for escape, just to help him get jobs done.]; he'd earned a favor from Tzezar that evening; he'd bought that tobacco. And he hadn't fallen ill. He'd got over it.

A day without a dark cloud. Almost a happy day.

The three extra days were for leap years.


* This is the narrator's/zek's name as used throughout most of the day (the book), though he is called Ivan Denisovich occasionally. I'm not sure if Shukhov is a prisoner name, as they have numbers anyway, or just his preferred name. This is not explained.

Val
PS No prob. And if you want to read more on life in GULAG, it's probably better to check Varlam Shalamov. ( https://archive.bookfrom.net/varlam-shalamov/ )
In his GULAG Archipilago, unlike One Day, Solzhenitsin gives more of the big picture, historic view, Shalamov is closer to a day-by-day narrator.
Moderator
PS: Thanks for the explanation, Val.
Val
PS The name Ivan is the first name, Denisovich is patronimic, Shukhov is the family name.
Ivan (or its short version Vanya) can be used by friends or elders, Ivan Denisovich is the respectful form, can be used by equals and colleques, family name or any combination of all three is normally used officially, for any identification purposes.