Shen Yun - coming to a country near you

Who ARE these gals?!: 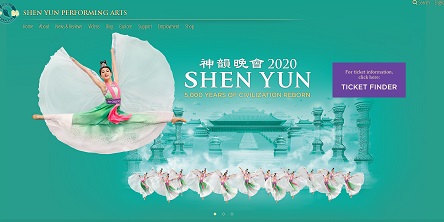 America is no longer the land of a homogenized people, as if this were 1975, with a sprinkling of very bright and interesting people from foreign lands, per John Derbyshire's "salt in the stew" expression. Still, South Alabama?? That's where I saw a big billboard for this Shen Yun deal, along with some ads where I live. Are we supposed to know who they are?

I have connections with China, but other than knowing, from the posters and billboards, that there will be some kind of ballet dancing, this is new to me. Chinese people I know don't seem to have made any plans for Shen Yun.

It turns out, upon my research*, that, yes, this is a dance show, but there's some more interesting things about this group of Shen Yunners. From their FAQ ("FAQ" - how quaint, but I LIKE it.), one can see that this outfit is part of the Falun Gong movement. This movement, NOT, as one would expect, a Chinese version of the American Gong Show, was BIG in China in the late 1990s, and that's when the government there decided to crack the whip on those people that would get up early to do stretches, jumping jacks, and meditation right out in public.

It's really not so much the public exercising that was the problem, as Chinese older women especially, love to get together in big groups and do that for their not-always-so-girly figures. Falun Gong had gotten big and somewhat political, and they made it clear that they don't like Communism. In many ways, the Chinese Gov't is less Communist than America's Feral Gov't, but they sure make a serious effort to control lots of things that really cause them more ill will than benefit (Coronavirus info. being a good example). Control freaks is what they are, and there was a big clash, as from a gong, in 1999.

I didn't know this crowd was still around. They aren't very welcome in China, so they have taken their message to the Chinese people in (at least) America, who are no small "sprinkling of salt" contingent anymore. Hence the billboards.

Shen Yun is a display of ancient 5,000 year-old** Chinese culture that they maintain, per the FAQ, the Chinese Gov't has tried to erase. I believe they mean the hard-core Mao-era government mostly, not so much that of today, and I gotta say I agree with the tyrant Mao on one thing - those thousands of characters are a pain in the ass! Hopefully there's more to the culture that doesn't require sitting at home memorizing stuff from flash cards.

These people being serious anti-Commies has made more interested in attending, though, I'd prefer it be more of some kind of ancient cultural monster-ox-cart show vs. dancing. The dancers will be beautiful, of course, but what about the coronavirus scare? I've seen Chinese pop singers singing on youtube videos with face masks on. That would look stupid - take your chances, ladies - if it doesn't kill you it'll only make you stronger ... kind of like China's bout with Communism, come to think about it.


Wait, what? No Kung Fu?! Is it too late to score those monster truck show tickets?

* ... "research" these days meaning spending a minute searching it up.

Moderator
PS: Haha, Machine! Perhaps I'm getting confused myself. I asked for some Shen Yun, hold the MSG, and I got Mu Goo Gai Pan, ... the comedy duo, Mu is the straight man, and Goo is the funny guy. Mr. Gai Panned their whole routine in the Chinatown Daily Worker, saying it was too Bui Wai Zhee.
Machine30
PS I love Chinese food! Wait, that’s not what this was about?
Moderator
PS: I must not have been paying attention, and we live in what might be considered a backwater by some (no problem for me). On youtube, it's usually Bernie Sanders or Elizabeth Warren bugging me.

I've found that if I reload the page right away, I don't have to see the ads ... doesn't work all the time ... gotta do some more experimenting with that.
MBlanc46
PS Mme B and I attend the Joffrey Ballet, which performs in the Auditorium Theater in Chicago, where this Chinese outfit comes every year. We’ve been seeing the ads for it for a decade or more. There are now more ads than ever before, especially now that they can buy 10 or 15 second spots on the digital billboards. Whenever I look at evil YouTube, half the ads directed at me are for it. It feels like the thin edge of the wedge.