Robotic Death from Above: 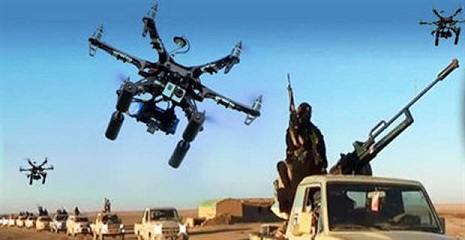 I'd promised something more to continue our point (in here) on the stupid arrogance of the American Military, not so much the organization itself, but Americans' views and uses of it. That was a week and a half ago, so here goes.

At the beginning of this year the President ordered the US military to wipe from the face of the earth an Iranian General Qasem Soleimani. We commented on Death from Above, Assasinations, and Declaration of War. That post has most of what I wanted to say already. The way America's military is ordered to carry out war on a whim of the President and often on the advice of some Neocon is so at odds with the ideas of this country's Founders, that it'd be flat-out sickening to them. They'd have formed militias and shot up the whole city named after FOUNDER #1, were that possible.

The use of drones and such could be a good thing were parts of the world at war again. It means that engineers and technicians could be tasked with winning the battles with not many bodies involved, at least until one side overwhelms the other in this realm. I believe a war in space, with the wagers of war using robotic craft to wipe out the other side's eyes and ears is the same thing. Better let computers and robots fight.

It'll still come to people after a while though. The stupidity of America's arrogant use of our military and its fancy hardware all over the world is in the exposing of the weaknesses for one thing, but more importantly, in the loss of goodwill due to these one-sided conflicts. That term "goodwill" perhaps doesn't cut it. It's that these sky-borne deliverers of death are a perfect "vehicle" for creating a burning hatred of America in the places they are used.

All one has to do is to turn this around in one's head. As written in that "Arrogance" article, no matter what stupidity is going on in America, would we like some other country's robots to pick and choose individuals and groups to wipe off the face of the earth at the whim of a leader somewhere? Oh, maybe it could be a group of the Antifa that this foreign superpower feels is ruining "free and fair elections" here. As much as I'd like to see that on youtube ... ooops, maybe the coordinates were entered wrong. There go 10 Unite-the-Right protestors, sorry 'bout that. Even without those kinds of inhumane and un-human mistakes, would you like knowing that if you get on the wrong side of some political conflict here, death may reign upon you out of the clear blue sky?

Way, way back, during the Iranian hostage crisis, and over the years as the Arabs and Moslems bitched about America's role in the world, I would laugh about this whole "America is the Great Satan" bit. Much of its unConstitutionality aside, America's armed forces had been a force for good in the world in general over the years of Communism in > 1/2 the world, with some lapses of course. Things changed over the years as the Neocons along with the MIC realized that the US military was unstoppable by anyone after the Iron Curtain fell abruptly in 1989 and even the Chi-Coms seemed not long for this world*. They began to use it as their personal plaything, and the MIC didn't mind as the money's been pouring in the whole time. (Where was our Peace Dividend from the ending of the Cold War? I haven't seen a penny!)

Just think of the personal destruction that has gone on over the years due to America's Death from Above policy. It's sickening, and though the term "America" must be understood to mean the American Feral Gov't, I can completely understand any foreigners in particular areas of the world thinking of America as the Great Satan. Sending machines to rain death upon anyone at will? Could it be ...

Yes, that was pretty harsh. How about we just keep up the Death from Above technology for a situation in which Americans in America are actually endangered by a foreign enemy, OK? Then, you can forget this post.

I can think back to a time during which I was a big U-2 fan. I don't know if Bono ran his mouth so much back then, but the music was what it was. The Joshua Tree album was out with nothing but great rock on it. That's with the one exception of that Bullet the Blue Sky which didn't have that good a tune at all and I could see was a political condemnation of America. I was not happy with the song, but I think it applies to the American government and military of today. I usually put up tunes I like. I don't like this one, but it needs to be heard now.

We've got to get out of this arrogant mode, Americans! The country is broke, and if you think we can continue this behavior even with morals aside, you've got another think coming.


* See Peak Stupidity's remembrances of the Tiananmen Square protests of 1989 (note, same year as the end of Communism in the East Bloc) - Part 1 and Part 2.

Moderator
PS: Right, BC. People under 35 would have no recollection of the Cold War being a big deal, and the end of it should have been a cause for celebration and goodwill. The Neocons blew it all.

BTW, I'd thought recently that most of this warmongering is just a way for the US to keep men, machines and the whole logistics chain in/attached to the Middle East for the sake of Israel. However, what ABOUT the Bosnia thing? That doesn't fit in with the theory. Was it just a distraction by Bill Clinton, not caring where in the world we had a war, just as long as it helps his polling and distracts people from his antics, and, oh yeah, the giving away of manufacturing capability to China?

Bosnia? Nobody before the mid-90s knew the place, and about nobody after 2005 gave a damn either. Find that on a map - it'd be a challenge for me, and I LUV Geography.
BernCar
PS: Sad, but true. I recall thinking (with the fall of the Soviet Union and the Iron Curtain) that maybe the country could get back to living without a nightmare hanging over our head and perhaps the government could give the peace dividend back to the taxpayers. Then my natural cynicism asserted itself and I began a mental countdown to the next crisis. And then, just like that, we were fighting in Kuwait and bombing trains in Belgrade.