Above the streets of San Francisco - Peak Stupidity's crush on Greta Thunberg? 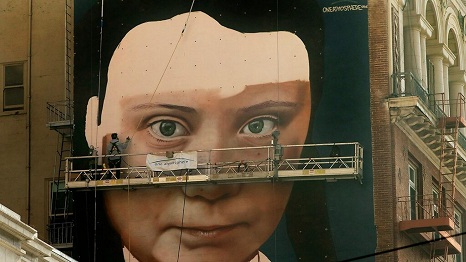 No, this fixation of ours on one Greta Thurnberg, Global Climate Crusader, is not due to a crush of any sort, and she has even single-handedly turned us off the idea of human trafficking. The whole deal with a teenage girl being put up as a mural-child for the political campaign on Global Climate DisruptionTM shows us how close to the peak of stupidity we are.

We noted the weird San Francisco Greta mural a few days back, but keep in mind, any sort of love for Greta is only in the Orwellian "Yes, I love Big Sister" sense, not any reason to buy her carbon-neutral roses and chocolates for Valentines. (Besides, I was pretty sure the chocolate would melt during shipping, what with the warming and all...)

I missed an amusing controversy in this Fox News article about the mural. Apparently using spray paint is controversial. This just gets stupider and stupider:

But Cobre was forced to go on the defensive after social media users began noting the irony of using spray paints – which they say harm the environment – to pay homage to the 16-year-old Thunberg, The Art Newspaper reported Sunday.

Cobre responded that the materials he was using were environmentally friendly, the paper reported.

“The thing is, the sprays I use are eco-friendly, and most of the paint is hand-painted with a roller,” he told the paper. “[It is] water-based so there is zero impact.”

“We are using low-pressure cans with a minimal footprint,” the post said. “The cans and the boxes will also be recycled, although many of the cans will first have a second life as part of a separate art project.”

The nonprofit went on to say the cans have been picked up and delivered in an electric vehicle, and the artist and organizers have been traveling almost exclusively by way of electric car, electric scooter or on foot to the project site — the side of building on Mason Street, above the music venue August Hall.
“The lift being used is also electric, not diesel.” the post added.

Ha, way to game this one! Yeah, we'll just make another piece of expensive art. Empty spray paint cans - put me down for some of that art. Hey California, you're running out of water, fires get out of control every other year, you've got 40 million people, 1/4 of the population doesn't speak English, you're in debt up to your asses, but .. the big worry is the carbon-neutrality of a Big Sister mural. Once Big Sister takes full control, carbon dioxide will no longer be foremost on your mind, I can tell you. Oh, Fox News does have a little fun with this:

At the same time, the paper reported some budding art critics on Twitter claimed the mural looked more like Russian President Vladimir Putin.

“I can’t be the only person that thinks the mural of Greta Thunberg in San Francisco looks like Putin, right?” one person tweeted, according to the paper.

When I squint a certain way, maybe he'd gotta point.

Anyway, though I commented on the Scott McKenzie hippy-era San Francisco song, I was not in right frame of mind at the time to come up with a real set of Greta-lyrics. In our post California Mourning ... on such a winter's day a musical picture of the former paradise of California, we included the song as the 3rd of 5.

You'll have to remember the tune, which was a really good one. Those hippies could write them some good music... here's our version, updated for the current-era, presented as a long-distance dedication to Greta Thornberg:

For those who come to San Francisco,
you'll spend some time at the Ministry of Love in there.
Above the streets of San Francisco,
scowling people with pigtails in their hair.

There's a new generation
with no good explanation, oh, oh,
retards in motion,
sailing the ocean...


Moderator
PS: Hey, Robert, thanks for writing in. The spell-checker goes with your browser, I would think, but sorry 'bout that anyway.

President Trump has irritated the so-called Pope they got up there to my satisfaction too.

Peak Enstupidation? Dang, I've already got my URL, and by gosh, I can't change now!

BTW, Robert, my endtupidated spell checker thinks I want to spell trepidation. Old Mozilla browser here, one they programmed back when Greta was just a wee one suckling carbon-neutral milk out of one of her Momma's carbon-neutral titties.
Robert
PS: I know one of the reasons I voted for Mr. Trump, was that he irritated people like Missy Thurnberg. I assume that one of the reasons she is so popular, is that she irritates people like you. The world is being enstupidated, and I am part of the problem. (But we must get our fun where we can.)

P.S. The (your? my?) spell-checker is not very bright. If enstupidated is followed by a comma, it is acceptable. When followed by a space, it is flagged.
Moderator
PS: I'd seen the place more than a decade later, Mr. Blanc. It was pretty nice then, though kind of expensive, but what did I know about it at that age. I'm surprised you didn't have a bad impression in '15. Perhaps it's a matter of which neighborhood.

I heard of those Zebra killings only through Paul Kersey on unz (though maybe a little bit off of Steve Sailer's site) You don't read any retrospectives on that, do ya, like you do about Emmitt Till (that is, if you read Steve Sailer, who, in turn, reads the NY Times)?

Most of what I know about the place is from Dirty Harry movies or whatever TV shows were filmed there. I know you can ride a cable car and that Rice-a-Roni is the big thing out there... and some say I'm out of touch.
MBlanc46
PS I lived on Mason Street for a bit in 1974. In a working man’s hotel a few blocks from Fisherman’s Wharf. The toilets were down the hall. I paid about $40 per week. Mme B and I paid a brief visit to SF in 2015. The San Remo is now a “boutique” hotel. It was about $240 per night. Toilets still down the hall. The people at the desk were quite friendly and interested to hear what the place had been like in the 1970s. They let me look around a bit. But we stayed at the Mark Hopkins on a special deal, for about the same price. SF was pretty crazy in the 1970s, some real evil stuff such as the black-on-white murders (Zebra killings?), but mostly pretty mellow. I’d have stayed if I could have found a real job. There was no bleep on the sidewalks, or junkies shooting up. To be honest, we didn’t see any of that when we were there in 2015.