Scenes from a Fancy French Restaurant ... 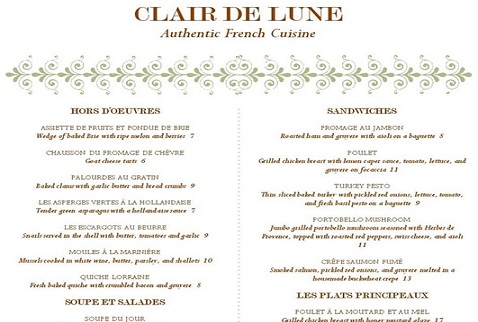 The Peak Stupidity blog staff not being songwriters on par with your Bill Joels, we refer you to our VERY FIRST POST for the original Scenes from an Italian Restaurant. No, per that post, nobody can write songs like that anymore.

The type of menu shown above can be seen at lots of fancy and medium-fancy restaurants these days. It's particularly the pricing in dollars with neither a dollar symobol, nor decimal point nor cents "field" that I refer to. Maybe I don't get to NY City enough, but this is kind of a new thing to see, maybe a decade old for me?

It's simple, I grant you. I like that, as one doesn't have to round up prices in one's head as with the silly $19.95 or $12.89 that has been part of retail pricing schemes since long, long ago. that stuff goes at least as far back as 1960s gasoline prices, when that 0.9 ¢/G of gasoline mattered, and has its legacy to this day. From that post:

On the other hand, it seems pretentious to omit the $ sign. Is a dollar the new cent? I can see a good ambulance chasing lawyer* getting a free meal out of some of these fancy places.

"Hey, your menu says the flambeed escargot costs 33, with fries and the large coke, and that bottle of old wine said 67. I assumed this is in cents, and that's why I left a buck and a quarter - I'd have hoped you'd appreciate the large tip there too. Frankly, I'm offended at your insinuations that I'm trying to get away with something. How was I to know these prices are in dollars!? It's downright egregious ... to not have units with your numbers, my engineer friend told me!"

"Gotta problem with this, you can take it up on our handy javascript web-form @ scam.deweycheathamandhowe.com."

Unfortunately, for a slick lawyer like that, there is Facebook now, and he may only get a few meals out of this before the internet catches up with him. In the meantime, bon apetit, boys!

Seriously though, is the dollar the new penny? Seeing one of these menus recently had me wondering how long has it been for inflation to have taken us that far? Peak Stupidity embedded a graph of the Consumer Price Index since the founding of America in the post Evil of Inflation/interest-rate stupidity Summary-2. The problem is that that graph only goes up to about the year 2000. The reader of posts here with the Inflation topic key will know that I don't believe the official numbers. Compared to the index of 30 in 2000, I'd call it AT LEAST 50 today.

If you look back at that graph and post, you'll see that the CPI, hence, price inflation, basically FLAT-LINED in America from the founding until ~ 1913 (hmmmm, what gives?). That is with the exception of during war time, but it would bounce back down afterwards.

I'd have to guess that that menu shown could be in cents were this the late 1800's. In 1880 you may not have been able to get just everything and anything that the Foodies demand nowadays. I'm guessing you could have gotten a big hunk of grass-fed beef or buffalo, potatoes, and whatever vegetables they could grub up, with a bottle of whiskey, for that 67 and 33, with maybe a whore for dessert for 2 bits - that's 25, if you still aren't into units.


So, we're supposed to pay those unitless big numbers in dollars, just so's you know. That's a whole lot better than the places that don't bother with prices: 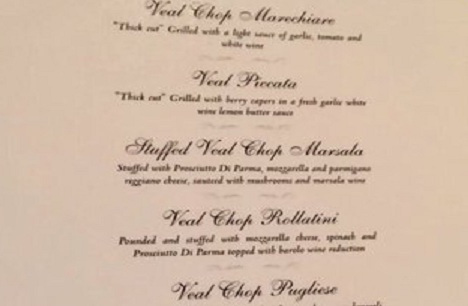 Don't ask how much. You'll eat it, you'll pay what we want, and you'll like it! That's their attitude, but if you don't like it, just get them to bring you back those melted cheese sandwich appetizers they talked you out of and a brand NEW bottle of wine. This just never gets old!

Moderator
PS: Oh, Mr. Blanc, I received "One Day in the Life of Ivan Denisovich" and will start reading it after I finish one other novel. Thanks again for the recommendation.
Moderator
PS: OK, that's way back with the 9's then. That deal about the newspaper sales makes cents too, pun initially not intended ...

No, it wasn't me actually doing that, except in my imagination about being a lawyer. I would not do that sort of move, unless, well, there were snails on my food or something.
MBlanc46
PS I’m dredging this up from my aging memory, so I’m advising you to not bet the ranch on it. I believe that the $.99 pricing began in Chicago in the nineteenth century. One of the papers (the late, lamented Daily News?) sold for a penny. To increase sales, the paper persuaded many of its retail advertisers to price their goods as $X.99 in order to get pennies in peoples’ pockets that they’d use to buy the paper. By the way, nice move pretending(?) that you thought those prices were in cents, not dollars. If I’m feeling particularly mischievous, and in a restaurant that I don’t plan to re-visit, I might give that a try.