I'd meant to add one more thing to yesterday's post on that ludicrously stupid tweet out of Mayor McCheese, but this anecdote can be its own post.

As much as the TV show M*A*S*H*, as opposed to the movie, pissed me off with it's smarmy left-wing sappiness, I did like how it made fun of the military bureaucracy. "Military intelligence" is indeed an oxymoron. This story is about a friend of long ago who was not in military intelligence, but in the military police - in the Air Force to be specific. You want some big guys to be in that particular field. 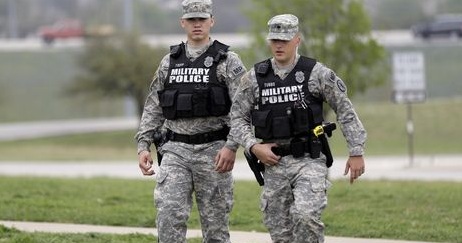 My friend didn't have the gut that these guys have, even as hidden by the armor.

Let me get back to that Body Mass Index, or BMI. McDonald's doesn't like the use of the BMI, per its tweet, though, I don't see any racial variables in the simple formula that BMI = m2 (in kg) / H (in m), where "m" is a person's (whether a military policemen or McDonald's customer or both) mass, and "h" is his height. See, just mass and height are involved, so race plays no factor! Now, what I don't like here is that this index is units dependent. The formula for English units is SI-BMI x 703, but either way, it must be expressed in kg2/m. Leaving off those units is erroneous, and I don't want to get into that argument right now.

A real index is unitless, in my humble opinion. Mach number, v/vsound is an example. Reynolds number (Re) is another good one. There are lots in the convection heat transfer and fluid flow realms of endeavor. Economists came out with a misery index, but it's bogus enough to where units are the least of our problems with it - no, Economics is NOT a science, so I give them some slack, poor jobless , errr, underutilized bastards...

OK, what about the anecdote - oh yeah, right. See, my military policeman friend was a bodybuilder as his hobby. You'd think the Air Force, if not sponsoring him for events, would at least appreciate the fact that here was a guy keeping in good shape for the job.

Well, the Air Force used the BMI index to keep track of its people, as far as fitness for duty goes. You don't want any real fatties who could not run down an, I don't know, Moslem psychiatrist, as a random example, at least in the MPs. It turns out though, that the Body Mass Index really can't, of course, account for which part of a guy's mass is muscle vs. fat. Height remains constant, as a body builder builds mass. BMI goes up, up, up, like the misery index during the Jimmy Carter administration.

Short story long, my friend got kicked out of the Air Force for being obese, due to his being a bodybuilder and having a high BMI. Now, I know McDonalds doesn't want to hear those two words, but the really ironic part of this story is that I now remember what kind of McDonald's meals that same friend told me he used to eat to get the huge amount of calories he burned daily. Three Big Macs, a large fries, and a coupla' them cherry pies and a shake or two, is what I recall - that was lunch!

That's military intelligence as applied to the military police!

Moderator
PS: Trevor - Agreed. Nah, all that GI Jane stuff is also not what a serious country ought to do with its military. The whole thing is a big social experiment, the conclusion of we won't see until a war with a real enemy (i.e. of even 1/4 to of the strength, equipment-wise).

I haven't pasted in your link yet, but I'm sure I already know what I think about it.
Trevor
PS I understand Tulsi Gabbard was also an MP. Can't see her clocking some drunk recon hombre, though:

"She was commissioned as a second lieutenant and assigned to the 29th Brigade Special Troops Battalion, 29th Infantry Brigade Combat Team of the Hawaii Army National Guard, this time to serve as an Army Military Police officer." ~WIKI

On a (somewhat) related matter...what do you think of the Marines now having to integrate more wamen into platoons?

https://www.businessinsider.com/marine-corps-platoon-level-gender-integration-required-at-boot-camp-2020-1
Moderator
PS: On that last point, the Chinese have not been blessed with the amount of dieversity that we Americans have, Bill. It will catch up to them in ... well never!

OTOH, maybe we can hope for the usual Chinese quality, were there a war (that we have no reason to get into). Then again, "quantity has a quality all its own" said a long-ago Commie.
Bill H
PS There are no limits to US military self delusion. I can't find it now, but recently read an article comparing the Chinese Navy to our Navy.

Seems China now has more warships than we do. Not only that, but their new ones are bigger, faster, and have better weapons that our new ones. (Well, our newest warships have no weapons at all, actually, because the "bullets" cost $800,000 each, but...) This is not a problem, however, because their sailors are not as skilled and well trained as our are.

Right. How many Chinese ships have collided with commercial cargo ships because their sailors were unable to cope with receiving and carrying out both helm orders and engine orders?